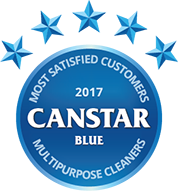 Even the most low maintenance homes are not immune to the perils and spills of everyday living. In this time-constrained world of ours, it makes sense to choose a multipurpose cleaner that can do a bit of everything. Whether it’s some oil in the kitchen, to dirty taps and sinks in the bathroom, to a spill of wine on the tiles in the living room, a multipurpose cleaner can be a cost effective and convenient option for generally sticky messes.

The fun doesn’t stop there, however. An easy and regular wipe down with a multipurpose cleaner can help keep high-traffic areas that see a lot of interesting spills shining and hopefully bacteria-free. Multipurpose cleaning products stand out for their convenience, coming to the rescue for all manner of countertops, appliances and other surfaces. Many parents would know of the convenience of such cleaners when the kids run amok.

Not all multipurpose cleaners are created equal, however. So which do Aussies rate highest as their ultimate kitchen buddy? Canstar Blue found out by surveying thousands of consumers across the country. The outcome is that Nifti has taken out top spot in our ratings for the second year in a row. Last time, it had to share the award with Earth Choice, but this time Nifti goes it alone.

Canstar Blue commissioned Colmar Brunton to survey 3,000 Australian adults across a range of categories to measure and track customer satisfaction. The outcomes reported are the results from customers within the survey group who have purchased and used multipurpose cleaner in the last six months – in this case, 2,365 people.

Nifti – just one of many products of the Colgate-Palmolive group – outscored the competition in many categories. It earned five stars for not just overall customer satisfaction, but for effectiveness, ease of use and product design – arguably all the most important factors for getting the job done. It was the only brand to achieve five stars in these categories. With Nifti’s easy spray nozzle, you can clean most surfaces and wipe clean with minimal fuss. It’ll get rid of dirt, grease and grime with ease, making it perfect for places like the kitchen that see a myriad of various interesting liquids and spills daily.

Another brand in Colgate-Palmolive’s swag, Ajax has a large range of cleaners and also features strongly for multipurpose cleaners. In these ratings, Ajax’s Spray and Wipe cleaners were also included. These cleaners include easy-use sprays, as well as convenient wipes. Ajax was a solid all-rounder, earning four stars in all categories but environmental friendliness where it earned three stars.

Budget grocery chain ALDI is earning a solid reputation for its home cleaning products, and its multipurpose cleaner earned four stars for overall customer satisfaction. It rated four stars in most categories, but stood out with five stars on value for money.

Earth Choice was a solid performer this year, with four stars in most categories except for environmental friendliness where it was the only cleaner to earn five stars. Part of the Natures Organics group, Earth Choice’s multipurpose spray contains no chlorine or ammonia, and its ingredients are plant-based. It’s also safe for grey water and septic tanks.

While not a standout in any category, tried-and-true Gumption was nevertheless a solid performer. It scored four stars in all categories except in environmental friendliness where it scored three. Its gritty texture and easy ‘wipe on/wipe off with a damp cloth’ application makes it a simple and effective cleaner.

Jif earned four stars in all categories except for environmental friendliness. We’re sensing a theme among cleaners here. Jif represents a fairly solid all-rounder, however its multipurpose cleaners are not in spray form. Regardless, Jif’s cream cleaners were rated by Aussies as easy to use and to have a good design.

Mr Muscle is perhaps most well-known for flexing its muscles in the drain-cleaning department. However, it also has a range of ‘5 in 1’ and multipurpose cleaners, with the multipurpose spray claiming to kill 99.9 per cent of bacteria. It earned four stars in most categories including overall satisfaction and effectiveness. The multipurpose cleaner comes in two different scents, ‘Fresh’ and ‘Citrus’, however that evidently wasn’t satisfying everyone as Mr Muscle earned three stars for smell.

Orange Power was a solid, if not a standout, all-round performer. It earned four stars in all categories except for smell, where it was the only brand to earn five stars. That’s a great result! This is perhaps for its refreshing natural, orange smell.

Pine O Cleen’s multipurpose spray comes in a variety of scents, affording it a four star rating for smell and all other categories except for environmental friendliness. It claims to kill 99.9 per cent of germs including the really nasty ones such as E.coli and Salmonella. Its multipurpose scents are available in ‘Orange Zest’, ‘Crisp Apple’, ‘Fresh Eucalyptus’ and ‘Lemon Lime Burst’.

Best-known for its powerful bleaches, White King also has a multipurpose cleaner in its range. It features a hospital-grade disinfectant, and is ideal for a range of surfaces. White King earned four stars in most categories, but earned three for smell, environmental friendliness and product design. This is perhaps due to it not being a spray, but rather a liquid. And evidently its lemon scent was not satisfactory enough for those surveyed.

Windex is perhaps best known for its window cleaning products, but it also has a range of multipurpose cleaners. With cleaners in a variety of scents, we imagine many customers will be happy with the range, which gives credence to its four star rating for smell, as well as all categories except environmental friendliness.

Repeating its results from last year, Coles once again earned three stars overall and in most categories except for value for money, where it earned four. Coles ‘Ultra’ Cleaner Cream does not come in a convenient spray bottle, which perhaps explains its three stars for ease of use and product design. However, if you’re after a ‘bang for buck’ cleaner, then its four star rating on value for money may be enough to tide you over. After all, you can bet it could be found in any Coles store.

Rounding off this review is Easy Off BAM, with three stars for overall satisfaction and all categories except for environmental friendliness where it earned just two. Evidently, some of those surveyed were not satisfied enough to say ‘Bam and the dirt is gone!’ However, many of the brand’s cleaners come in an easy spray format, with a variety of scents.