Has your toilet seen better days? If you need a helping hand, compare toilet cleaner brands with Canstar Blue’s customer review and ratings. 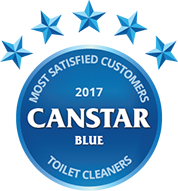 Earth Choice has washed away the competition to top our ratings table for toilet cleaners. The cleaning brand with a conscious was rated five stars in most categories, including ease of use, smell and effectiveness

Scrubbing the toilet to make that porcelain shine can be an unpleasant experience, but it’s a job that needs doing. A clean toilet is usually the pride of the bathroom, and having a clean toilet is the first step towards eliminating nasty bacteria in the home. Given the obvious downsides, you will no doubt want the process to be as fuss-free and contactless as possible.

This makes nozzle-type cleaners especially useful as you don’t actually have to touch the bowl, leaving just the toilet seat to be contended with. This is probably a job many people put off for too long, but it can actually be tackled pretty efficiently with the right products.

So which toilet cleaners are up to the messy task? Canstar Blue produces an annual review to find out, and for the second year running, Earth Choice was the only brand to receive five stars for overall toilet cleaning satisfaction. In fact, it scored top marks in most categories, including effectiveness, smell and ease of use. This year, 10 brands featured in the ratings, and Earth Choice beat some tough competition to defend its title.

Canstar Blue commissioned Colmar Brunton to survey 3,000 Australian adults across a range of categories to measure and track customer satisfaction. The outcomes reported are the results from customers within the survey group who have purchased and used toilet cleaner in the last six months – in this case, 2,361 people.

A brand under the Natures Organics group, Earth Choice represents the eco-conscious choice for cleaning products. Its toilet cleaner product comes in two scents – Aqua Fresh and Wild Lavender. So if you’re feeling pretty wild or fresh then Earth Choice may be for you. It comes in an easy-application bottle, and evidently a lot of Aussie shoppers were impressed. Earth Choice achieved five stars in all categories except value for money, which may suggest shoppers are willing to pay more for an all-natural, effective product.

ALDI’s PowerForce range has a variety of products to make that bowl beautiful. Its gel discs apparently make flushing not only smell great, but also keep the bowl clean. ALDI also has a range of toilet disinfectants. The supermarket chain achieved a range of four and five star ratings across all categories, achieving four stars overall. The PowerForce range seems to represent a solid all-round option, with five stars on value for money.

Coles (not including Smart Buy)

Coles has a range of disinfectants, as well as an easy-application toilet cleaner. Evidently, a lot of consumers were satisfied with Coles, achieving four stars for overall satisfaction, as well as five stars on value for money and ease of use. It achieved four stars in every other category, making it a solid all-rounder.

Harpic has a large range of toilet cleaners, ranging from gel discs to disinfecting liquid, as well as flushable wipes for a quick touch up. For the bowl it also makes cageless rim block to keep your toilet fresh with every flush. Harpic achieved four stars for overall satisfaction, with five stars for effectiveness and ease of use. However, it only achieved three stars on value for money. This suggests Aussies maybe willing to spend a little more for an effective product.

Bleach extraordinaire White King comes to the toilet cleaning game with some apparently effective solutions. It achieved four stars overall, but five stars for effectiveness. It also achieved three stars on value for money, smell and environmental friendliness. It has a large range of toilet cleaning products, including bleach, wipes, bleach tablets, power gel and cistern blocks to have every part of your toilet smelling fresh and minimising harmful bacteria.

Domestos is a socially-conscious toilet cleaner, with partnerships with organisations like Unicef to help deliver sanitation and more hygienic living to developing nations. As for its toilet cleaning products in Australia, Domestos doesn’t mess around and has only disinfectant in its range. For no-bull cleaning, Domestos could be for you. Evidently many Aussies thought so. It scored four stars overall, with three stars given on value for money, smell, environmental friendliness and product design. It earned five stars for effectiveness, however.

Woolworth’s budget-oriented Homebrand line-up came out with a fairly solid showing of results. It was rated four stars overall, and indeed achieving four stars for most categories. Homebrand is directed at budget shoppers, but it’s promising to know you aren’t getting a dud product in a crucial area like toilet cleaning. These products can be had from as little as $2! However, that wasn’t enough to give it top marks for value – it earned four stars here.

Duck was another solid middle-of-the-road performer with four stars in all categories except value for money. Its range includes bleach cleaners in a variety of scents, as well as fresh disks and rim blocks. Duck’s main strength seems to come in its fresh discs and rim blocks that are available in scents like citrus.

The supermarket chain’s budget-oriented line-up seems to lose out against its main rival Woolworths Homebrand. Smart Buy products achieved three stars for overall satisfaction, but four stars in most other categories. Its toilet cleaning range incudes easy-application gel cleaners, as well as in-cistern cleaners meaning it’s not just the surface of your toilet that’s clean.