Show Important Notes^* Hide Important Notes^*
* Overall satisfaction is an individual rating and not a combined total of all ratings. Brands with equal overall satisfaction ratings are listed in alphabetical order.
^ By clicking on a brand or ‘details’ button, you will leave Canstar Blue and be taken to our referral partner to compare. You agree that Canstar Blue’s terms and conditions apply to this referral. If you click on a brand that our referral partner does not cover, you will be taken to a brand page on Canstar Blue.
Canstar Blue research finalised in April 2017, published in June 2017. 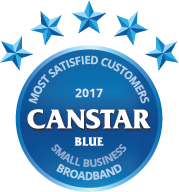 For the fourth year in a row, iiNet has been rated highest by business internet customers. It leads the way from Optus, TPG and Telstra on five stars for overall satisfaction, as well as customer service, contract clarity, bill clarity and value for money.

In this century, small businesses need an internet connection to survive. Whether it’s organising rosters, doing the pay run, emailing staff, operating point-of-sale systems, or whatever else, small businesses in Australia can thrive with a solid broadband connection. As they say, a business is only as good as its communications, and having reliable and fast internet a sure-fire way to keep communications flowing. If you and your business are unsatisfied with your internet provider, our 2017 review and ratings may be able to help.

Canstar Blue annually surveys hundreds of small business owners and key decision makers in Australia to find out which internet providers are coming up trumps, and which are more like a bump in the road. This year, iiNet has made it four years in a row at the top of the business internet standings, rated five stars for overall customer satisfaction, as well as contract clarity, bill clarity, customer service and value for money. Optus and TPG both rated four stars overall, with Telstra behind on three stars.

IiNet has traditionally been a strong performer in Canstar Blue’s customer ratings for internet providers, whether it’s ADSL/Cable or National Broadband Network. Our business internet ratings include all kinds of broadband connections in Australia. We’ll go into detail about what each provider has to offer small business customers shortly before looking at what drives customer satisfaction for businesses.

There are a diverse range of internet plans on offer for businesses big and small. Here is an overview of what the biggest internet providers in Australia have to offer your business.

iiNet has a range of business-specific broadband plans. Like its plans for regular customers, prices start at just $60-odd a month, which encompasses ADSL plans. Business NBN plans start from about $70 a month. From there you can add on business phone deals for an extra $25 a month, which includes calls. iiNet seemingly benefits from having dedicated business support on hand when it’s needed, plus speed boosters for uploading. Plans are available with no lock-in contract, or over 24 months. There are also international call add-ons available if your business deals beyond Australia. iiNet was a firm favourite among business owners in 2017, rated five stars for overall satisfaction and in most other categories.

Most of Optus’ business broadband plans are pretty much the same as its regular plans, with unlimited data starting from just $60 a month across NBN, ADSL and cable connections. A Fetch entertainment bundle and Optus Sport are even included in some internet plans, making it a convenient way to occupy time in the break room. Beyond this, Optus also has bundles that include Microsoft SharePoint and 365, as well as Norton antivirus system from $80. Optus was a solid performer across all categories in 2017, earning four stars across the board.

TPG has a large array of small business internet solutions, including NBN plans, standalone ADSL plans and Ethernet plans at either 10Mbps or 20Mbps in download speeds. Unlimited data on the NBN starts at around $110 a month and for that you also get no lock-in contract. Unlimited fibre optic broadband with massive 400Mbps speeds costs about $400 a month. Regular business ADSL is also much the same as TPG’s consumer plans. TPG was rated four stars overall in our 2017 review, but was rated five stars on value for money. Evidently small businesses liked the range of plans on offer and the speeds afforded.

Telstra claims to be the ‘network without equal’ and uses this as one of its main selling points for small business customers. Telstra provides a total telco solution, with NBN, ADSL, mobile, and business phone plans on offer, as well as cloud services and eCommerce facilities. Plans are pretty on-par with Telstra’s regular broadband line-up, with 600GB costing about $80 a month on NBN Tier 2 speeds. ADSL is much the same, with the dearest plans costing around $120 a month for 2000GB data. You also get unlimited uploads, as well as 24/7 customer support, which shouldn’t be overlooked. Telstra was rated three stars for overall satisfaction and in most other research categories this year.

Network performance was found to be the greatest driver of overall customer satisfaction in 2017. They say you never truly know someone until they’re faced with slow internet, and slow internet in the world of business can be extremely costly. Eight out of ten survey respondents (82%) this year said that having a fast internet connection is ‘crucial’ to their business, while 42% said they regularly suffer from a slow or unreliable connection. Luckily, 73% of those who have switched to the NBN have experienced a speed boost. On the other hand, that’s more than a quarter of business customers reporting no improvement on the NBN.

Business internet customers unsurprisingly place a higher priority on customer service than those who just have internet for general home use. Customer service encompasses tech support for when things go awry, as well as installation and after sales service. Time is money in the world of business and you don’t want to be left waiting for the help you need. A massive 84% of businesses kept the same provider when they switched over to the NBN. This is obviously an opportunity for providers to ensure good customer service – a key driver of satisfaction that likely keeps customers on board. More than half (55%) of those surveyed said that when they switched over to the NBN, they experienced some teething issues, such as phone lines being inoperable and systems not working properly as a result. Switching to the NBN is a big deal, so you’ll want your provider to be on the ball.

Australian businesses are spending an average of just over $240 a month on their internet plans, which is a lot of money in anyone’s books. Therefore, if business owners are paying a pretty penny, then they should rightfully expect a top notch product and support. However, two-thirds (65%) of those surveyed said they could probably get a better deal by shopping around. So why haven’t they switched? A lack of time? A lack of effort? A lack of options? The cheapest internet plans are not always the best, but make sure you’re not paying more than you need to.

Clarity and flexibility of contract

This was found to be of less importance to business owners than regular internet customers, as it seems businesses are likely to stick with their provider for longer. As such, lengthy contracts could matter less here, but for some businesses it is clearly still an important issue. The majority of businesses in Australia are small ones, run by regular people. As such, no one likes being tied down, or being subject to, tricky terms and conditions with their broadband plan.

The least pressing issue for business internet customers was found to be that of bill clarity. This is likely due to businesses trusting their telco to charge them appropriately, but it’s still worth keeping an eye on costs. When more than $200 a month is at stake, small businesses might do well to scour their bill once in a while and to see if they could actually get a better deal. Checking the fine details of your bill can be a useful way to determine if what you’re paying for is wildly over, or under, expectations. There’s no point paying for something you don’t need!

Choosing an internet plan for your business

No business should have to put up with a subpar internet plan. Often, the internet is the lifeblood of a business, and having a lacklustre plan can be both frustrating and financially impairing. Unfortunately, not one provider in this year’s review was rated five stars in terms of network performance. However, for a good all-round package, iiNet was a clear winner for overall customer satisfaction – for the fourth year in a row. Once could be luck, but four years on the spin is clearly a trend. Setting up a business is hard enough in the first place; don’t let internet cause you any unnecessary headaches. It pays to shop around, and maybe our 2017 ratings will help.