Show Important Notes^* Hide Important Notes^*
* Overall satisfaction is an individual rating and not a combined total of all ratings. Brands with equal overall satisfaction ratings are listed in alphabetical order.
^ By clicking on a brand or ‘details’ button, you will leave Canstar Blue and be taken to our referral partner to compare. You agree that Canstar Blue’s terms and conditions apply to this referral. If you click on a brand that our referral partner does not cover, you will be taken to a brand page on Canstar Blue.
Canstar Blue research finalised in March 2017, published in April 2017. 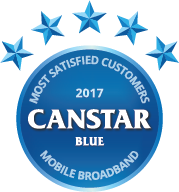 Vodafone has been rated highest for mobile broadband services in Australia, leading Optus and Telstra on factors including customer service, network performance and value for money. Vodafone has taken over from Optus at the top of these ratings in 2017.

Gone are the days of dialup and measly data allowances that cost an arm and a leg – nowadays even mobile broadband plans come with good amounts of data relatively cheaply. Mobile data is the ultimate for flexibility and browsing on the move, so get the lowdown on which providers offer the best bang for your buck with Canstar Blue’s 2017 mobile broadband review and ratings.

When shopping for a mobile broadband plan, you often get a choice of either bundling it with a tablet, or going your own way with the SIM-only route. You could also pick up a dongle which does more or less the same thing for those with laptops. SIM-only plans have become increasingly popular recently as you can simply insert them straight into your own tablet for instant browsing, or even use the SIM with your mobile phone for a simple data-only service. There are lots of great-value plans to be had, with several telcos now offering data-only SIMs. So where can you find the best deal?

Canstar Blue has surveyed hundreds of mobile broadband users to offer some guidance. While everyone wants a bargain, it should be noted that the cheapest plans might not necessarily mean the best value. That’s something to keep in mind when we mention smaller service providers later. Our ratings have put Australia’s big three telcos to the test, with Vodafone leading the way from Optus and Telstra for overall customer satisfaction. In fact, Vodafone received top marks in every area in our 2017 review, including network performance, customer service and value for money.

We’ll go into detail about what each of the big three offers in the way of mobile broadband shortly. But first, let’s go over the basics of mobile broadband to help you determine which type of service might be the best bet for you. If you’re after a cheap deal, here is a selection of some of the featured brands below:

Mobile broadband is the term used to describe a totally wireless internet experience achieved through devices such as a portable modem or ‘dongle’, a mobile phone, tablet or other mobile devices. Many plans are available with 4G network coverage, with some providers offering big data allowances on the slower and older 3G connection.

Like with mobile phone plans, mobile broadband services can be paid for on either a prepaid or postpaid basis. The main benefit of prepaid is you only recharge when necessary. So if you’re travelling for a few weeks and just need an easy internet connection for the short-term, prepaid represents a good option. Postpaid plans generally come with contracts and the ability to bundle your SIM card with a tablet or portable modem, while prepaid is usually SIM-only and you’ll have to source your own device. Monthly contracts are the norm with prepaid plans. What’s more is that with postpaid mobile broadband, there are generally fewer providers, while the prepaid option sees a lot more competition.

4G theoretical speeds are a maximum of around 30Mbps, which is fast enough to stream TV shows and sports. However, in real-world scenarios, mobile broadband speeds typically only reach around 10Mbps to 20Mbps. That’s still reasonably quick for internet on the go, but there are some factors that can affect your mobile broadband speeds further.

How much does mobile broadband cost?

Australians are spending an average of $67 a month on mobile broadband, which is a fairly large amount considering average spending on fixed-line internet connections is between $70 and $90 a month, our research shows. You can pick up a SIM-only mobile broadband plan for as little as $10, but expect data allowance to be pretty modest. If it’s big-data you want, prices rise to more than $80 for which you’ll get around 70GBs.

Now, let’s take a look at what the big telcos offer, and find out which smaller service providers are also worth considering.

Vodafone has snatched the crown from Optus to be top-rated in our 2017 mobile broadband review. It smashed the competition with five stars for overall satisfaction and in every other category. So what are its customers actually satisfied about? As far as the big guys go, Vodafone offers some of the cheapest prices for the data included. Vodafone’s mobile broadband is on 12 month contracts, and you can get 3GB for about $15 a month. You can bundle these plans with various mobile modems and dongles at a low cost, with some even coming at no extra cost. For prepaid users, you’ll be faced with similar value, but have to front-up extra money for the modems and dongles – starting at around $20. Vodafone has some pretty cheap mobile broadband plans, and evidently a lot of people were satisfied about how clear Vodafone is with its billing and contract policies, as well as network performance.

Optus tends to be slightly more expensive than Vodafone in terms of data for your dollars. You can get 2GB for about $15 a month, but the major plus is it comes with no contract so you can feel free to leave it or recharge as you see fit. You can also bundle in tablets, with iPads starting around $40 a month, but you will be tied in for 24 months. Dongles are also available for purchase, but for the most part Optus’ main selling point is its SIM-only deals. Another bonus with Optus is that you often get data-free music streaming on a lot of plans, and if you’re out and about then we imagine apps like Spotify and Pandora will go down a treat. Optus rated four-stars overall, with four stars also for value for money, customer service and contract clarity.

As the biggest internet service provider in Australia, Telstra naturally faces some scrutiny across all of its plans – mobile broadband included. Customers rated it three stars for overall satisfaction, but it did rate four stars for network performance and bill clarity. Most notable, however, was its mere two-star rating on value for money. Telstra is generally one of the most expensive mobile broadband providers around, with others often including more data for less money. You’ll get about 1GB for $15. However, to see the value, you’ll have to dig a bit deeper, as often you get perks like free Telstra Air, free cloud storage, as well as free AFL and NRL game passes, meaning you can watch every game live on your device. So while Telstra tends to lack a bit in data for your dollars, it does sweeten the deal with other cool perks. You can get plans on either a prepaid or postpaid basis, with modems, dongles and tablet bundles available for purchase.

Other mobile broadband providers worth a mention

The big three telcos mentioned above were the only ones who garnered enough survey responses to be featured in our ratings, but that doesn’t mean other telcos aren’t worth a look. Often, you’ll find with these smaller providers that you don’t get as many perks and have to order online with likely minimal hands-on customer service, but in terms of ‘data for your dollars’ they can be hard to beat.

Keep an eye out for companies like Vaya, which offers 5GB for under $20 a month. Also worth a mention is OVO Mobile, which offers a huge 13GB for less than $30, while Amaysim and Jeenee Mobile also both have extremely competitive plans. While the bigger telcos likely have superior perks and extra tidbits, if you just want stripped back data without the fluff, then these smaller providers may be worth a look.

Canstar Blue commissioned Colmar Brunton to survey 6,000 Australian adults across a range of categories to measure and track customer satisfaction. The outcomes reported are the results from customers within the survey group who have a mobile broadband account in their name and they pay the bills – in this case 282 people.