Show Important Notes^* Hide Important Notes^*
* Overall satisfaction is an individual rating and not a combined total of all ratings. Brands with equal overall satisfaction ratings are listed in alphabetical order.
^ By clicking on a brand or ‘details’ button, you will leave Canstar Blue and be taken to our referral partner to compare. You agree that Canstar Blue’s terms and conditions apply to this referral. If you click on a brand that our referral partner does not cover, you will be taken to a brand page on Canstar Blue.
Canstar Blue research finalised in June 2017 published in July 2017. 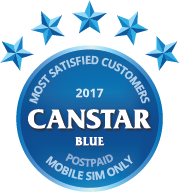 Amaysim has made it two years in a row at the top of our customer satisfaction ratings for postpaid SIM-only plan providers. Amaysim earned five stars for sign up and activation process, customer service, billing information, plan flexibility, value for money and overall satisfaction.

To find the best phone plan for your needs, you’ll first need to determine which type of phone plan you want. If you desire the perfect trade-off between flexibility and value, then a postpaid SIM-only phone plan could be the way to go. Provided you already own your own handset, you can pick from more than 20 different mobile carriers, all desperate for your business. Activating a new plan is as easy as ordering a SIM and porting over your old number if you want to keep it. But with so many service providers now to choose from, picking the right plan for your needs represent a real challenge. So how do you know which way to turn?

Canstar Blue can offer a hand with our annual review of postpaid SIM-only providers and their plans. Each year, we survey hundreds of mobile users across Australia to find out how they’re getting on with their phone plans and asking them to rate their mobile service providers based on key factors including the sign up and activation process, customer service, bill information, network performance, plan flexibility, value for money and their overall satisfaction. While the majority of postpaid SIM-only plans come on no contract terms, these ratings also include feedback from customers on contracted SIM-only plans. These are not to be confused with mobile phone plans that include a new handset.

This year’s review features feedback on four leading postpaid SIM-only carriers, with Amaysim topping the table for the second year in a row. The orange telco, which uses the Optus network to deliver its services, once again performed exceptionally well – rated five stars in all research categories, with the exception of network performance. Optus achieved four stars for overall satisfaction, while Telstra and Vodafone both rated three stars.

Amaysim has earned a solid reputation amongst mobile users keen to find the perfect balance between phone plan flexibility and value. All of its plans come with no contract terms, meaning you’re free to switch providers whenever you please. Amaysim also gives customers the choice of selecting a plan on either a postpaid or prepaid basis, which few other carriers do. You won’t be surprised to hear then that Amaysim also ranks very highly in our annual review of prepaid phone providers. It is certainly something of a crowd pleaser, also allowing customers to choose their own phone numbers for a modest fee.

While Amaysim specialises in unlimited talk and text plans with varying data allowances, it also offers some pay as you go alternatives. All value plans come with unlimited calls & texts as standard, and come with 28 day expiry periods, so every four weeks exactly you’re up for a recharge. This makes it easy to budget in-line with your pay, but it effectively means you’re paying for 13 recharges over a year, instead of 12.

While our ratings feature four of the most prominent postpaid providers, remember that there are many more offering great value, including:

So, what exactly could you get for your money? Let’s review Amaysim’s phone plans and those from several other postpaid SIM-only carriers to help you find the deal that best matches your needs.

These days you can expect providers to bundle in around 1GB of data for about $15 or so a month – some even come in at under $10! However, unlimited talk and text is not common at this low price, with calls often capped at around 200 minutes or an equivalent dollar value. Though if you’re adamant on unlimited calls & texts, plus at least 1GB of data, providers to offer this or better are Jeenee Mobile, Moose Mobile, Bendigo Bank Telco and Exetel. Keep in mind that all except for Moose Mobile come with 12 month contracts, but they do offer no lock-in contracts with slightly less included. Moose comes with no contract as standard, which is beneficial for those who like flexibility. Amaysim is also hugely competitive in this space, with its cheaper 10$

Unlimited talk and text starts to become pretty much standard for plans costing between $20 and $30. 2GB of data is also quite common and this is where providers like to outdo each other with just how much data they can deliver. Providers in this space even offer 5GB in some circumstances. Again, Jeenee Mobile is tough to beat if looking to spend about $20, while for only a bit more SpinTel offers a massive 6GB for under $25. Other providers worth looking out for are Vaya and Bendigo Bank Telco. Amaysim also offers a competitive 2.5GB plan for just $20 that can often be found cheaper for the first six months.

This is where the big boys tend to shine, as 10GB and unlimited calls and texts for around $40 starts to become about standard – but be prepared to sign up for 12 months! Optus and Virgin each offer similar plans, keeping in mind that Virgin is a telco operating on the Optus network. However, among the MVNOs, Amaysim is tough to beat with its 15GB data, at a $40 rate. Jeenee, SpinTel, Moose and Exetel are all very competitive, but Amaysim seems to have the edge. While 12 month contracts are tempting at this price point, ask yourself, how good will these plans look in 12 months? While they’re a great deal now, you may like the flexibility of a no contract plan to jump ship when a better offer comes along.

As you can see above, there are lots of great postpaid SIM-only deals around. But before you go signing up with a plan, it’s important to understand exactly how these plans work because, unlike with prepaid phone plans, you can be charged more than you were expecting to pay.

The safety net of being able to make calls whenever you need to means that postpaid plans are probably a good idea for those who use their phones a lot and those who travel fairly regularly. They may also be the preferred choice for parents looking for a phone plan for their child. If keeping close tabs on your spending is important to you, then prepaid may be the wise alternative. For maximum bang for your buck, it’s hard to look past postpaid plans.

Canstar Blue commissioned Colmar Brunton to survey 3,000 Australian adults across a range of categories to measure and track customer satisfaction. The outcomes reported are the results from customers within the survey group who have an active postpaid SIM-only mobile phone plan and they pay the bills – in this case, 601 people.

<strong>Please note: the past ratings listed are for Mobile Phone Plans – with or without a handset.</strong>