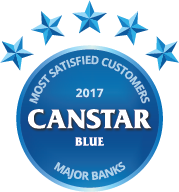 For the fourth year in a row, Australians have rated NAB highest of the big four banks. In 2017, NAB earned five stars for product range, customer service and overall satisfaction, leading the way from CBA and Westpac (four stars) and ANZ (three stars).

Many Australians choose a big bank for life, but it’s worth remembering that – just like with any product or service – you can and should consider switching if you’re not entirely satisfied with what you’re getting. You wouldn’t stick with your internet provider or electricity supplier if you thought you could get a better deal elsewhere, so why should banks be any different? Their job is not only to keep your money safe and offer you numerous financial products, but also to help efficiently manage your day to day finances, including assisting with any personal enquiries and problems you may have along the way. So, which big bank is rated highest?

To find out, Canstar Blue produces an annual review of Australia’s major banks, with customers asked to report their feedback on their financial institution of choice, covering factors including customer service, self-service functionality, digital banking and fees & charges. This year, more than 3,500 Aussies took part in our big bank comparison, with NAB rated highest overall.

For the fourth year in a row, NAB is the only big bank to earn five stars for overall satisfaction. It also received five-star reviews for its product range and customer service, while achieving four stars in most other areas. Commonwealth Bank and Westpac both rated four stars overall. ANZ scored three stars.

This year’s survey of big bank customers found that:

But perhaps the most interesting result to emerge from this year’s review is that – despite the digital age we live in – more than three quarters of Australians (78%) have visited their local bank branch in the last year. While the numbers are highest for elderly customers (88% of those aged 70 and over), the majority of young customers are also still inclined to visit a physical bank (75% of those aged in their 30s). While the number of physical banks on our streets is falling, it seems most consumers want their local branch to remain open. Our survey found:

With digital banking platforms continuing to evolve, why and how are customers still using their physical branches?

Why do Aussies still visit their local bank?

Our research found that depositing or withdrawing cash is the most common reason for Aussies to visit their local bank. Almost two thirds of respondents (64%) gave this as a reason for visiting their local branch, followed by:

A further 1% visited their local branch to update their bank on their personal details, while 3% said they had other reasons.

How often do Aussies visit their local bank?

While the majority of Australians (78%) have visited their local bank in the last 12 months, most do so quite rarely. Just 14% of survey respondents said they visit their bank on a monthly basis, while a further 10% do so even more frequently.

A further 3% said they never visit their local bank branch.

What matters most to bank customers?

As well as finding out which big bank is rated highest, our research also identified what drives overall customer satisfaction for bank customers.

So while digital banking continues to play an increasing role in the lives of many customers, it seems most Australians ultimately want a big bank that provides great service when they need it.

Canstar Blue commissioned Colmar Brunton to survey 6,000 Australian adults across a range of categories to measure and track customer satisfaction. The outcomes reported are the results from customers within the survey group who have an everyday transaction account with a big four bank – in this case, 3,542 people.