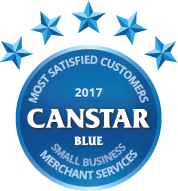 With plastic cards continuing to replace cash in the lives of most consumers, the need for businesses to adjust and find the best methods of accepting payments has never been greater. For most, this means subscribing to a merchant service facility provided by a bank, allowing you to take card payments with relative ease. But which bank should you go with? With Eftpos terminals evolving all the time – and fees & charges varying between financial institutions – it can pay to do your research. In this review, Canstar Blue lends a hand by showing you how Australia’s big four banks are rated by small business customers.

This year, we surveyed more than 600 small business owners and decision makers to find out what they think of the financial institution that provides their merchant services. Banks were rated on factors such as fees & charges, reliability, device functionality, transaction speed and online reporting, to give you an idea of what to expect should you get on board with them. In 2017, Commonwealth Bank was the only institution to rate five stars for overall customer satisfaction, in addition to most other categories. It was four stars overall for NAB and Westpac, while ANZ achieved three stars.

Five-star reviews were in fairly short supply in 2017. While Commonwealth Bank earned top marks in six out of seven research categories, the only other five-star ratings went to:

However, CBA proved a clear winner overall, making it two years out of three at the top of the ratings.

Commonwealth Bank is one of Australia’s most innovative financial institutions, with a suite of merchant devices to make any business sit up and take notice. Its simple merchant plans give you an Eftpos device and monthly plan of your choice, with a strong focus on portability. CBA’s flagship device is called Albert – a fully portable Eftpos tablet that can be carried around restaurants or stores, meaning great flexibility for the business and convenience for the customer. With 3G and Wi-Fi connectivity, Albert promises fast contactless payments with a PayPass and payWave reader, while allowing for split payments, tips, email receipts and invoices. Smaller devices called Leo and Emmy are also available, targeted at businesses on the move.

While merchant services are becoming more advanced and transactions processed quicker and quicker, it’s the fees & charges that come with the convenience that matters most for small business customers, our 2017 survey found. It identified the following drivers of overall satisfaction in order of importance:

Lots of factors are important in determining overall satisfaction with a merchant services provider, but when you’re considering your options, it’s important to fully understand the fees and charges that could apply.

Merchant service fees are made up of several fixed and variable components. The fees are usually based on the number of transactions that are made over a month and can vary between types of businesses. As an example, CBA publishes the following fees that may apply to your business:

As you can see, merchant service fees can certainly add up. Therefore it’s little surprise that no bank in this year’s review achieved top marks on the subject. CBA and ANZ rated four stars for fees & charges, while NAB and Westpac received three stars.

When asked how much they spend on merchant service fees in an average month, business owners and decision makers reported an average of $410. About six out of ten survey respondents (61%) declared merchant service fees as a concern for their business. In addition, two-thirds of respondents (67%) think they could get a better deal on merchant fees by shopping around. However, there is little doubt about the importance of good merchant facilities as 65% of businesses said the majority of customer spending goes through their Eftpos facilities.

But perhaps the most telling statistic to report is that more than three quarters of businesses surveyed (78%) have always been with the same bank for their merchant services. No matter how happy you are with your current arrangement, it’s always a good idea to shop around and compare offers from a range of other providers. It may cost you a little time, but could save you heaps in ongoing fees and charges.