Canstar Blue reviews motorcycle helmets from Shoei, Fox, AGV, Arai, Bell and Shark helmets based on factors such as comfort, fit, durability, vision, ease of cleaning, value for money and noise dampening, as well as overall satisfaction in 2017. 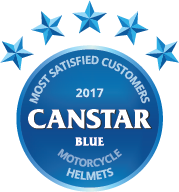 For the second year in a row, Shoei helmets have come out on top in our customer satisfaction ratings, dominating in every category.

Shoei helmets on top for the second time

A helmet is one area of the motorcycle world you don’t want to ‘cheap out’ on. While you can probably save a few bucks by opting for a lesser motorcycle model than the one you dreamed of, or go to an independent mechanic and not a dealer, do you really want a cheap and cheerful helmet? All helmets in Australia must comply with a certain set of safety standards, though the standards have been opened up to allow Euro-compliant helmets into the country as well.

The majority of Aussie motorcyclists we surveyed in 2017 (53%) most recently bought a full face helmet, while around one in five (19%) bought a flip-up helmet, and just 6% bought one solely for off-road use. Helmet safety awareness is also pretty high, with 61% knowing they shouldn’t wear a helmet after it has been involved in a crash. Only 17% of respondents have ever bought a helmet online, preferring to try on and fit in-person. Technology-packed helmets are also on the rise, with 14% owning a helmet with added electronic features built into their helmet (e.g. Bluetooth). It is evident Aussie riders know a thing or two about motorcycle helmets. But which helmets are rated highest?

As far as helmet satisfaction goes, Shoei has topped our customer ratings for the second time. It dominated every single research category, with five stars across the board. With the exception of Shoei, top marks were in short supply:

Overall though, Shoei has proved a clear winner for the second time in as many years.

What to look for in a motorcycle helmet

Helmets are more than just hard bits of plastic wrapped around your head – there’s actually a lot of science that goes into them, with comfort and fit two key factors. Our research identified the following drivers of customer satisfaction:

It’s interesting to find that value for money is low down the pecking order. However, overall a motorcycle helmet needs to have an even spread of all these categories to be a winner from an Aussie rider’s point of view. Evidently, Shoei helmets present themselves as a high-performing, comfortable helmet brand that represent somewhat of a ‘jack of all trades’ option. While riders are paying more for Shoei helmets, they see the brand as a worthwhile investment.

How much do motorcycle helmets cost?

Good motorcycle helmets aren’t exactly cheap, but then they probably shouldn’t be! Our 2017 survey found Aussie motorcyclists spent an average of $357 on their current helmets, which is up from last year’s average of less than $310. Shoei helmet owners spent nearly $200 more on theirs, with an average of $550. Perhaps some things are just worth paying extra for?

No matter what motorcycle helmet you decide to purchase, it must be compliant with either Australian or European standards to be roadworthy. To help you decide which helmet is best for you, here is an overview of the six brands in our 2017 ratings.

Shoei is seen as a premier provider of motorcycle helmets in Australia and produces a large range of mainly road-going helmets. Shoei helmets have been sported by the biggest and most successful Moto GP riders and everyday riders can experience much the same product. The range includes exciting model names like ‘X-Spirit III’ and GT-AIR. As mentioned, Shoei helmets are not exactly cheap, but riders are willing to pay more for a ‘premium’ helmet. Many Shoei helmets are over the $500 mark, with some costing over $1,000. Shoei, as many would have expected, dominated this year’s ratings, with five stars for overall satisfaction, as well as for every other category. Despite the higher-than-average prices, Shoei helmets were rated five stars on value for money, indicating that value doesn’t necessarily mean cheap.

Fox is a mainstay in the motocross world, producing a large range of helmets specifically suited to off-road applications. Many of its full-face motorcycle helmets can be found for less than $400, while the most expensive are around the $700 mark. Fox helmets are centred on being lightweight and breathable while retaining maximum safety standards, designed to match the rigours of off-road racing. Fox rated four stars for overall satisfaction in 2017, but notably achieved top marks on value for money.

AGV is an Italian motorcycle manufacturer and has over 70 years of motorcycle pedigree to its name. AGV manufacture both road and off-road helmets, with full-face and open face designs available. AGV on-road helmets are priced anywhere from around $200 up to $2,000 for the most premium models. These models feature premium-grade materials such as carbon-fibreglass for a lightweight construction. Premium AGC helmets are often more about collectability rather than to be used out on the road. This exclusivity mixed with functionality means that AGV commands a loyal following among riders. It was, however, rated just three stars for overall satisfaction and every other research category.

Arai is a Japanese helmet manufacturer that primarily offers road-going helmets. Some are designed for racing applications, so if you’re a track-day warrior, Arai may be a good bet. Arai makes both open-faced and full-faced helmets, with prices starting at around $400. Prices quickly rise from there though, with the premium helmets fetching around $1,200 or more. What you’re paying for in these dearer helmets are premium-grade materials, as well as to have a ‘name brand’ on your helmet. Arai sponsors superbike champion Jonathan Rea, for example, and you can wear his pro model on your noggin. Arai rated three stars overall, but did score four stars for comfort, fit, vision, ease of cleaning and noise dampening.

Bell is an American manufacturer of motorcycle helmets – both on and off-road. It was founded in 1954 and has gone on to sponsor some of the world’s most famous motorcyclists. For dirt enthusiasts, Bell has a large range of full-faced helmets with visors and some are designed to replicate what your favourite rider wears. For on-road enthusiasts, Bell makes a wide range of simply-designed yet tech-rich helmets to keep your head safe and sound. Bell often features top-spec materials on its helmets such as carbon and fibreglass, with lightweight polycarbonate shells used. Bell off-road helmets can be had for less than $300, while the most expensive helmets for both on and off-road applications exceed $1,000. Bell rated three stars overall, but notably achieved top marks on value for money.

Shark is a French company specialising in on-road motorcycle helmets. Most of the models in the range comprise of full-face helmets, though some flip-up helmets are available. Most Shark helmets are based on motorsports applications with exciting names such as ‘Evoline Series 3’, ‘Race R Pro’ and so on. The Evoline Series 3, in particular, is an evolution of its predecessor, which features a resdesigned interior and chin bar for better stability at high speeds. It is also 200 grams lighter than the Series 2. This may sound like much but this can add up over hours of riding. Shark helmets start at around $400, and some of the dearest models approach the $1,000 mark. Shark was rated three stars overall and in most other research categories this year.

Canstar Blue commissioned I-view to survey 800 Australian motorcycle riders across a range of categories to measure and track customer satisfaction. The outcomes reported are the results from customers within the survey group who have purchased and used a motorcycle helmet in the last 2 years – in this case 419 people.