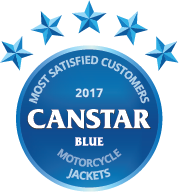 For motorcycle jackets, Harley Davidson has zoomed into top spot for overall satisfaction and achieved top marks in most other areas.

Harley Davidson is perhaps better known for its iconic motorcycles, but the fact is you can walk into a Harley Davidson dealership to buy your bike, and get pretty much every bit of gear you need to ride. Unbeknownst to some, motorcycle jackets are more than just bits of leather like James Dean wore in Rebel Without a Cause – they are now protective cocoons that must offer impact padding but also be comfortable, breathable and stylish. In our 2017 review of jackets, Harley Davidson came out on top with five-star reviews in most areas. The results are based on the feedback we received from hundreds of motorcyclists across Australia.

Aside from Harley Davidson, top marks were few and far between:

What to look for in a motorcycle jacket

To really impress Aussie motorcyclists, manufacturers have plenty to do. Our survey identified the following drivers of customer satisfaction when it comes to motorcycle jackets:

Above all, riders want their jacket to offer a strong degree of protection. Second to this, they want the jacket to fit well – snug but not too snug – and be comfortable. Interestingly, value for money and functionality were down on the list, meaning a jacket doesn’t necessarily have to be cheap or have lots of pockets to be a ratings winner.

How much do motorcycle jackets cost?

Our research found that the average expenditure on a new motorcycle jacket in 2017 was $341. However, cost is not the biggest factor when it comes to buying a motorcycle jacket, as 56% of survey respondents said they would spend more on their jacket in future.

Not only that, but a third said their primary purchasing motivator was the degree of protection the jacket offered. Near a quarter said the primary concern was comfort/fit. Just 13% said it was because of the price. When jackets can cost hundreds of dollars, motorcycling evidently becomes a pretty expensive hobby or mode of transport, especially when you first buy all the gear. No matter what jacket you decide to buy, how much protection it offers should be a top priority and trying it on instore is always a good bet to get a comfortable and well-fitting jacket.

To help you decide which jacket is best for you and your budget, here is an overview of the five brands in this year’s review.

Jackets are not exactly a flippant purchase as they, on average, cost over $300. Though it does pay to do your research and find the best jacket for you. Below are the top brands rated in 2017’s Customer Satisfaction report.

Under its ‘MotorClothes’ moniker, Harley Davidson sells lots of protective clothing for when out riding, particularly excelling in motorcycle jackets. Many are vintage-inspired, but with modern technology embedded in them. They range from the leather-based protective jackets, to the denier nylon jackets, which perhaps more look suited to a Terminator movie than a scene out of a James Dean movie. Prices range from under $200 for the most basic, to over $1,000 for the most tech-rich jackets. More expensive jackets usually feature better ventilation with removable liners, extra reflective taping and hidden or interior pockets. The relatively high prices of some jackets, however, does not deter customers as Harley Davidson was rated five stars for overall satisfaction and in most other research categories.

ALDI is a bit of an anomaly in this report due to the fact its motorcycle jackets are not always available in store. You have to rely on its Special Buys to get your hands on one, but evidently a lot of motorcyclists have done just that as ALDI recorded enough sample size in our survey to be included. When they are available, the jackets usually sell like hotcakes. Usually there is just one type of jacket on offer. The latest was a summer-oriented jacket costing less than $200. It complied with EN 13595 standards and featured six seconds of abrasion resistance. ALDI’s motorcycle jackets are usually released alongside its full-face helmets, thermal underwear and motorcycle-themed shirts. ALDI rated four stars for overall satisfaction in our jackets review, but did get top marks on value for money.

Alpinestars is generally seen as a premium manufacturer of road-going motorcycle equipment, including jackets. The brand has sponsored many a famous rider on the Moto GP circuit, and the logo itself has become a bit of a fashion beacon while out riding. All jackets sold in Australia are compliant with legal standards, and range in price from around $200 for the most basic models to in excess of $1,000. Many of Alpinestars’ upper-tier jackets are also designed to be fitted with the brand’s ‘Tech-Air’ airbag system, which is as the name describes. Alpinestars rated four stars for overall satisfaction, and did so for every other research category.

Dririder is an Aussie company and has previously won our Motorcycle Jackets Award. For over 35 years, it has been keeping Aussie riders dry… and warm, and safe on our roads. The brand’s jackets have been designed in Australia to suit Australian conditions, with many featuring basic designs but with extreme functionality and great protection in key areas. Jackets are waterproof, with inserted thermal liners for those cold mountain runs. For the summer months, they’re also adequately vented for breezy weather riding. Dririder jackets range in price from less than $300 up to nearly $500, which is cheaper than other brands in this year’s ratings. Dririder rated four stars overall, but notably achieved top marks in terms of durability, functionality and value for money.

While you stock your garage with a BMW car and motorbike, you can also kit yourself out with a BMW motorcycle jacket. BMW jacket designs are as much about casually hanging about as they are about riding, with stylish designs and the BMW logo loudly displayed some of the time. Many BMW jackets are designed for all seasons, with removable liners for the colder months, and ample ventilation for the warmer months. BMW’s jacket prices vary wildly, but most are under the $1,000 mark. BMW was rated three stars for overall satisfaction and in every other category.

Canstar Blue commissioned I-view to survey 800 Australian morotcycle riders across a range of categories to measure and track customer satisfaction. The outcomes reported are the results from customers within the survey group who have bought and used a motorcycle jacket in the last 3 years – in this case, 367 people.