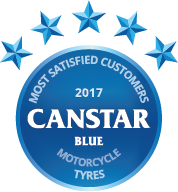 Michelin has taken the top podium spot from Pirelli in this year’s motorcycle tyre ratings. Michelin clocked five-star reviews across each research category, including handling, tyre life and value for money in 2017.

On a motorbike, all you have to separate you and your beast from the road are two thin strips of rubber, generally referred to as ‘tyres’. On a bike especially, tyres do more than just keep your wheels connected to the ground – they have to provide solid handling and grip, and be moderately durable to withstand Australian road conditions. Which tyres are best prepared for the job? This year, Michelin has clawed back top spot from rival Pirelli in our annual customer ratings.

Often, the fastest and easiest way to get more ‘performance’ from your bike is to upgrade the tyres, but where do you start? Tyres aren’t exactly cheap and there are lots of brands out there. Out of the brands rated this year, Michelin came back into top spot after Pirelli took the crown in 2016. Michelin was our previous five-star winner in 2015, so you can see the trend of these two tyre giants keeping their customers most satisfied on the road. They also tend to be two of the most expensive brands to buy, so it seems to be a case of ‘you get what you pay for’.

So what do riders look for from a motorcycle tyre? Let’s consider our survey findings from 2017 before taking a closer look at the brands in this year’s review.

Australian motorcyclists seem to be a very informed bunch when it comes to their wheels, our survey found:

With all that said, a lot of trust is placed in the humble mechanic. 41% of riders said they trust their mechanic’s tyre recommendations – which could be seen as high or low, depending on how you look at it. With a lot of money on the line, it’s understandable that motorcyclists want to make sure the tyres they are purchasing are the right ones.

How much do motorcycle tyres cost?

Our 2017 survey found that Aussie motorcycle owners spent an average of $258 per motorcycle tyre in their most recent purchase, so paying for two is obviously nothing to sneeze at. Michelin customers spent an average of $266 per tyre, which is more than the average but nothing out of the ordinary. This may suggest that riders are willing to spend a little more to get a tyre they know will perform well. Despite the hefty upfront cost, most riders were not willing to risk their tyres going bald:

It seems obvious that the state of your tyres can contribute to your safety on the road, so don’t take any chances. To help you decide which tyres are best for your bike – and budget – here is an overview of the four brands in this year’s review.

Motorcycle tyres need to do a lot to impress their riders. A tyre can’t just be cheap, it needs to perform well, be durable and having good stopping ability. You want tyres that will keep you safe, but also represent value for money. This is what Michelin, Pirelli, Bridgestone and Dunlop have to offer.

Like its car tyres, Michelin motorcycle tyres are heavy on performance on both the road and track. After a seven year absence, Michelin has returned as the tyre sponsor for the illustrious Moto GP series. As for what it offers on the road, Michelin is an OEM tyre supplier for brands including BMW and Harley Davidson. The latest in the line-up is the ‘Power RS’ series, which promises ‘peerless grip’, and was unveiled at the last Australian Moto GP. At the retailer level, Michelin tyres are generally sold in pairs and mostly cost under $600 for the pair, which is in line with what our survey found. Michelin is a stellar performer, both on the road and in our ratings, with five stars for overall satisfaction as well as all other research categories, including key areas like performance and value for money.

Pirelli was 2016’s tyres winner, but was knocked off its perch by main rival Michelin. It’s a battle of France versus Italy. In the Pirelli range, there are some exciting tyre names such as ‘Diablo’, ‘Sport Demon’, ‘Phantom’ and ‘Angel’. All evoke images of pure performance and arguably the most ‘exciting’ in the range is the ‘Diablo Rosso III’, which has technology derived from the World Superbike Championship and wide, soft tread for ultimate performance. Prices for Pirelli tyres vary wildly, with a set of Diablo tyres likely to cost you in excess of $500. Pirelli was again a solid performer in this year’s ratings, with four stars for overall satisfaction, achieving three stars on value for money, but notably top marks for stopping ability.

Bridgestone is a Japanese tyre brand that has long been involved in motorcycle racing, and has previously sponsored the likes of Aussie champion Casey Stoner. Bridgestone makes road tyres with a racing mindset, and has exciting model names like ‘Battlecruise’ and ‘Battlax’ – the latter is claimed to be ‘Japan’s flagship tyre’. This is the OEM tyre for some models from motorcycle manufacturers such as Yamaha and Kawasaki – two Japanese stablemates. Battlax tyres can be found from about $400 the pair. But despite the slightly cheaper price compared with Michelin and Pirelli, Bridgestone was rated just three stars for overall satisfaction. It did, however, earn four stars for tyre life and value for money.

In Australia, depending on what state you live in, Dunlop tyres are distributed by either ‘Monza Imports’ or ‘Ficeda Accessories’ – or ‘Funiton Enterprises’ if you live in Tasmania. Dunlop makes both road-going and off-road motorcycle tyres, with names like ‘Sportsmart’ and ‘Trailsmart’ evoking images of great performance and safety. Today, Dunlop is wholly owned and operated by Goodyear, yet still has a strong brand presence in Australia. As for prices, top-of-the-range Sportsmart tyres range from about $200 per tyre, to over $400 depending on specific model and specification. Dunlop was rated three stars for overall satisfaction in 2017, but did get four stars for tyre life and stopping ability, as well as value for money.

Canstar Blue commissioned I-view to survey 800 Australian motorcycle riders across a range of categories to measure and track customer satisfaction. The outcomes reported are the results from customers within the survey group who have purchased motorcycle tyres in the last 18 months – in this case 297 people.