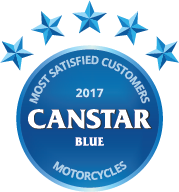 For the first time, Triumph has achieved a five-star rating in our Most Satisfied Customers Award for new motorcycles. Triumph dominated most categories, beating tough competition from the likes of Yamaha and Harley Davidson.

Motorcycles are the ultimate machine for feeling the road and finding some exhilaration in your daily commute. From leaning into every twist and turn of a challenging mountain road, to zipping in and out of lanes stuck in gridlock, owning a motorcycle can be great fun, practical and cost-saving all at once. Experienced riders may report the sensation of their motorbike becoming an extension of themselves, like a noble steed or a knight with his horse. Cars are undoubtedly more popular on the road because of obvious reasons, but nothing can match a bike for the fun factor – both on-road and off-road. The low ongoing costs, fuel efficiency, sheer power figures and fun factor make motorbikes an alluring prospect for many. You’re either a bike person or you’re not.

Motorbike brands command a loyal following, and while owners would invariably argue that their brand is the best, Triumph produced the most satisfied customers in our 2017 motorcycles review. It snatched the crown from Yamaha, perhaps signalling that road bikes are coming out on top again for producing satisfied customers. Triumph dominated the review this year, with five star ratings across most research categories. This is all the more impressive given top marks were in short supply across the board. Ducati was the only other brand to score a five-star rating – on the subject of servicing costs.

So no matter if you fancy yourself as a Chad Reed, Valentino Rossi or a James Dean, motorcycle riders all share love for their machines. But what makes motorcycle riders tick, and what words of warnings do they have for new prospective riders?

Aussie roads ‘dangerous’, but we won’t be deterred from riding

Many motorcyclists surveyed find that Australian roads, and other motorists, are a danger to them while riding. The survey found that:

Despite these concerns, many riders report they’ll never part with their beasts and injury concerns are not enough of a deterrent to doing something they love.

Luckily, even with the danger concerns around motorcycle riding, it seems that most injuries sustained are relatively minor. The survey found that almost a quarter of motorcyclists (23%) have been involved in an accident, with ‘road rash’ the most commonly reported injury. Almost a quarter of those who have been involved in an accident reported no injuries at all.

How much do motorbikes cost, and why do we ride?

The survey found motorcycles spend an average of just over $11,000 on their new rides, which is a fair chunk of change, but probably less than buying a new car. Despite injury concerns and family or friends giving us their two cents, we continue to ride, both for sheer enjoyment and for pragmatic reasons.

About four out of ten (42%) cited cheaper fuel expenses as a reason for owning a motorcycle, while 36% reported that it’s easier to find a parking spot. However, riding for a hobby (60%) was the most common reason given for owning a bike.

To help you decide which motorbike might be best for your weekend adventures, here is an overview of the eight brands that featured in our 2017 review.

Each manufacturer seems to carry with it strong brand loyalty with devoted riders, but here are the top rated brands in Australia.

Triumph is a British brand with strong pedigree. While the original company of the same name went into receivership more than 100 years ago, the rebirthed Triumph has been making motorcycles since 1984. Triumph claims to make ‘modern classics’ and manufactures a range of touring, cruiser, ‘café racer’ and supersport bikes. On-trend yet timeless, Triumph seems to have taken classic styling and infused it with modern sensibilities. While prices vary significantly between categories and dealerships, roadster bikes can be had from about $13,000. Triumph dominated this year’s ratings, being rated five stars for overall satisfaction and nearly every other research category.

Headquartered in Bologna, Ducati is unashamedly Italian, with its famous red sports bikes. The most notable sports bike in its line-up is arguably the SuperSport, which boasts 110 horsepower on a light 210kg body, along with three riding modes. It’s been rated the ‘world’s most beautiful bike’ by various critics in the industry, and simply looking at the thing may make you gush. Prices for Ducati bikes vary wildly, with some starting at around $10,000, while more advanced and serious sports bikes could cost upwards of $30,000. Ducati was rated four stars for overall satisfaction in our 2017 review and the same score in a few categories. It stood out for cost of servicing, where it was rated five stars by customers.

As the cult-classic icon and mainstay of Sunday rides anywhere in Australia, Harley Davidson bikes still command a strong marketshare. Harley Davidson was founded more than 100 years ago in Milwaukee, Wisconsin – you can’t get much more American than that. Since then ‘Harleys’ have captured the spirit and minds of road-going bike enthusiasts the world over, with a loyal following in Australia. A country tavern on a Sunday wouldn’t be complete without 30+ Harleys out the front. In 2017, Harley Davidson has moved away somewhat from its big cruisers and now offers a ‘Street Rod’ bike for around $13,000, making it great to get around town in and quick trips down to the pub. Harley Davidson was rated four stars for overall satisfaction and in other categories including reliability, handling, mileage and comfort.

Kawasaki is a manufacturer of all fun motorsports toys a guy or girl can dream of. From jet skis to ATVs to motorcycles, Kawasaki has you well covered. In the motorcycle world, one of the most popular sports bikes of the last 20 years is undoubtedly the Ninja. Ninjas are a popular mainstay of learner riders the world over owing to their abundance, relatively cheap price and friendly engines for learning to ride on. Kawasaki also makes Ninjas with 1000cc of engine capacity, making it possible to spend your whole life on a Kawasaki bike. Kawasaki also makes many off-road and motocross bikes for those who like a bit of dirt in their ride. Kawasaki bikes are available from about $6,000, while some cost more than $20,000. Kawasaki was rated four stars for overall satisfaction and most other research categories in 2017.

Suzuki, while perhaps more noted for its cheap cars, has a strong presence in the motorcycle world, manufacturing both road and off-road bikes. It produces a very large range of both, and is good for cheap and punchy biking. Suzuki seems a hit with learner riders, with many models coming under this specification. Suzuki bikes are also at the cheaper end of the spectrum, with new road bikes starting at just $4,000. Suzuki was a solid performer with four stars for overall satisfaction, and in other categories like value for money.

Last year’s award winner slipped down the ladder a bit this year, but Yamaha is still a strong presence on Australian roads – and dirt trails. Yamaha produces a large range of both road-going and off-road bikes, including those that are LAMS (learner) approved. Dirt bikes are available for less than $2,000, while the cheaper bikes tend to be part of the YZF series, are learner-approved and come in at less than $4,000. Yamaha was again a strong contender overall with four stars for overall satisfaction and in most other research categories – including key areas like value for money and reliability.

The famed automotive company from Bavaria makes a range of road-going, cruiser-oriented bikes. The range has grown to include ‘naked’ bikes, which is an emerging bike category in Australia for those that like no-frills fun. BMW motorcycles sway towards the lax touring side of the spectrum, and naked bikes can be found from around the $6,000-$10,000 mark, while some of the more premium bikes can cost upwards of $30,000. BMW has an almost unrivalled reputation for quality cars, but was only rated three stars for overall satisfaction – and every other category – when it comes to its motorcycles.

Another bike manufacturer with perhaps more clout in the car industry, Honda makes a large range of both on-road and off-road bikes. Honda even produces a range of pee-wee bikes, which 50cc in capacity and designed for kids. These cost less than $2,000, yet adult-sized naked cruisers don’t cost much more than this. Many Honda bikes are LAMs-approved as well, lending to their popularity with younger riders. Topping out the range are Honda’s touring and 1000cc sports motorbikes, which often cost more than $30,000. Honda scored three stars for overall satisfaction in our 2017 review and the same score in most other categories, except for reliability where it was rated four stars.

Canstar Blue commissioned I-view to survey 800 Australian motorcycle riders across a range of categories to measure and track customer satisfaction. The outcomes reported are the results from customers within the survey group who currently own and have ridden a new motorcycle in the last 3 years – in this case 653 people.