Do you dream of owning an SUV or 4WD? Start the search by comparing brands with our customer satisfaction review and ratings. 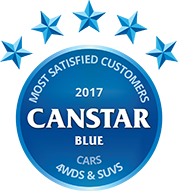 For the second year in a row, Toyota has been named king of the road in our customer review of SUVs and 4WDs. Aussie motorists rated Toyota five stars in almost every category.

Australia is a huge country with wide open spaces ripe for exploration. Whether it’s on beaches, trails or through forests and creek beds, our great brown land provides the goods for all your desired off-road driving fun.

It’s no surprise that a lot of Australians have ditched their old hatchbacks and sedans in favour for SUVs and 4WDs that afford a little more usefulness, especially when using the terrain as your playground or simply for something a bit easier to put the kids into. Owning an SUV or 4WD opens up a host of new driving opportunities. The question is, are you willing to take them?

Like with most significant purchases, purchasing an SUV or 4WD will likely require a lot of research and thought as to what you actually need. There’s a whole bunch of brands out there and nearly every manufacturer has some sort of SUV or 4WD in its range. To help you potentially hit the road sooner, Canstar Blue surveyed well over 700 motorists who have recently purchased such a vehicle to find out just how satisfied they are when it comes to their 4WD or SUV.

While there was a lot of stiff competition, only one came out clearly on top – Toyota. Toyota’s known around the world over for its rugged off-roaders and the automotive giant earned five stars across most categories. Toyota has an immensely popular range of hardy vehicles, including the LandCruiser, Hilux, Prado and Kluger, providing the backbone to Toyota’s off-road prowess. These model names have become pretty much synonymous with ruggedness, especially the LandCruiser and Hilux which have a rich favourability on Aussie roads. If you’re not an owner of such a vehicle, you might be wondering why people buy them – what makes 4WDs and SUVs so popular?

There are many benefits to buying an SUV or 4WD. In fact, many of these vehicles are no longer solely used for off-road adventures. From the school pick-up, to hitting the highway on weekends, SUVs and 4WDs have exploded in popularity over the last decade or so due to their utility as a vehicle for the whole family. Parents in the front, kids in the back – let’s go. A fair portion of owners we surveyed – 34 per cent – said their main reason for the new car purchase was to buy a bigger car. So if you think it’s time to upgrade, or your family is increasing in size, buying a SUV or 4WD may be the best bet.

However, there is one major drawback to buying any car, but especially a new 4WD or SUV, and that is price. Indeed, 86% of those surveyed said they tried to negotiate a lower price when they visited the dealer, with 41% of them admitting their chosen vehicle would have been out of their budget had they not negotiated.

Cost is obviously one of the main factors when deciding on what type of car to purchase. Money doesn’t grow on trees. 55 per cent subsequently said they got their new car in an exchange deal (i.e. trading in their old car). And considering that a lot of people saved up for their purchase – 57 per cent said they paid in full at point of purchase – it’s easy to see why a lot of people are trying to squeeze a lot more value out of their cars.

In this regard, Toyota scored five stars in every category except for value for money, where it scored four stars. With only one manufacturer earning five stars in this category (Hyundai), this suggests that people may be willing to forego ‘value for money’ or budget motoring in favour of other factors.

One of these factors is reliability, and Toyota earned five stars here. Given that the average length of ownership for an SUV or 4WD is 6.9 years, it’s easy to see why people want fuss-free motoring and a reliable ride. Toyota was the only manufacturer rated to achieve five stars for reliability, which is notable.

As suggested earlier, it seems many Aussies look at more factors than price alone when it comes to buying an SUV/4WD. Our research identified ‘driving experience’ as being the most important driver of SUV/4WD customer satisfaction, with good customer service also key. Naturally, price is important but it seems owners of these vehicles look at the bigger picture – which is appropriate given the size of the cars we’re talking about.

Hyundai was the only make to earn five stars for value for money. This is perhaps evident in its range of cars. While it doesn’t produce any serious off-roaders like the LandCruisier, it does make cost-effective ‘soft roaders’ that are immensely popular on Aussie roads – models like the Tuscon and Santa Fe. However, you need to do more than just provide great value to satisfy an Aussie 4WD/SUV owner. Toyota earned five stars for reliability and driving experience, meaning it’s no use getting a good deal if you hate driving your car! Toyota also earned five stars for point of sale service, which is notable as dealerships often get a bad reputation.

As mentioned earlier, a hefty amount of those surveyed said they negotiated to get a better price on their SUV/4WD.

The art of negotiation is not lost on SUV/4WD owners.

Buying a new car is often a significant undertaking, and larger vehicles require perhaps an even higher degree of research. We hope that our star ratings provide at some guidance on your search. Toyota is a safe bet, but it’s worth comparing all the brands in the ratings. As for vehicles in general, researching what cars performed well in our overall satisfaction ratings, may also prove to be useful.

Canstar Blue commissioned Colmar Brunton to survey 9,000 Australian adults across a range of categories to measure and track customer satisfaction. The outcomes reported are the results from customers within the survey group who have bought a new car from a dealership in the last three years – in this case, 773 people.