You are viewing the archived Hire Cars ratings. Follow the link to view the current Hire Car rating page. 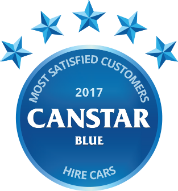 Owning a car gives you the freedom to go where you want, when you want. But when you hop on a flight, getting from A to B becomes a bit more challenging, unless of course you hire a car at your destination. Renting a car should be a relatively easy process, but it’s often complicated by confusing terms & conditions and surprise costs, making it quite daunting, especially for first time motorists. However, it doesn’t have to be this way. If your hire car company is transparent about fees & charges, delivers on the vehicle and accessories you ordered, and doesn’t slap you with any unexpected costs, renting a car can be an easy and convenient solution to your getting about needs. So, which hire car companies in Australia are rated highest by customers?

All rental car companies will have good and bad experiences to their name, which is why it’s a good idea to seek as many views as you can before deciding which to choose. At Canstar Blue, we record the opinions of hundreds of motorists in forming our customer satisfaction ratings, to give you the big picture about the biggest operators in Australia – the rental car companies you’re likely to find at the airport when your plane lands at 11pm.

In 2017, Thrifty has been rated highest overall, as the only hire car operator to receive five stars for overall customer satisfaction. In fact, Thrifty earned five stars across all research categories this year, including those relating to cost transparency, booking process, vehicle availability and customer service. Thrifty leads the way from Budget and Hertz (four stars overall) and AVIS and Europcar (three stars).

Thrifty replaces AVIS at the top of the table. AVIS had previously been rated highest in four out of the last five years. It is the first time Thrifty has been rated highest overall. To help you pick the right hire car company for your needs, let’s get an overview of the five in this year’s review, plus several other smaller operators that didn’t make it.

The Australian branch of Thrifty is owned by NRMA Motoring and Services. The company claims to aim towards transparent, helpful service catering for needs ranging from the economical to the luxury, across a range of passenger and commercial vehicles. Thrifty has branches in more than 170 locations across Australia – including airports – and is claimed to have one of the best networks throughout rural and regional Australia. Internationally, Thrifty has more than 1,000 locations across 80 countries. Globally the Thrifty brand is owned by the same company behind Hertz.

Targeted towards getting you on the road at a low price, Budget has over 190 locations across Australia. The company is also partnered with the Qantas Frequent Flyer and flybuys programs, meaning bonus points for your cross-brand loyalty. With Budget, drivers can select from a wide range of economical cars, 4WDs, trucks, minibuses, utes and trailers. It seems to have an extra focus on commercial vehicles, promising to meet suit your needs without breaking the bank. As part of the Avis Budget Group, Budget offers hire services across the world in over 90 countries.

An American-founded car rental company, Hertz operates in more than 150 different countries, with about 9,700 locations, including subsidiaries Dollar and Thrifty. Hertz offers cars, minivans, 4WDs, utes, trucks and various other kinds of commercial vehicles. The range also includes a wheelchair-accessible vehicle. For a more luxury experience, Hertz has a choice of high-end and high-performance cars. Hertz also runs its own rewards program called Hertz Gold Plus, with membership benefits such as faster pick-up and no additional driver fees.

Claiming to be the first company to hire out cars from airport locations, AVIS was founded in the USA in 1946. Today, AVIS (including its subsidiaries) has about 5,500 locations across more than 165 countries. In Australia, there are over 240 AVIS locations to pick from. The AVIS fleet covers trucks, vans, utes and minibuses in addition to a wide range of passenger vehicles. AVIS offers a more premium car hire service compared to its low price-focused subsidiary, Budget. It is also partnered with a large number of rewards points and partnership programs, including airlines and hotel groups across the world.

Europe’s biggest rental car operator was founded in Paris in 1949. The French-owned company now operates in over 140 countries, with a mixture of directly owned and managed, regionally managed, and franchised locations. In Australia, Europcar is operated by the overall company rather than as franchises. In addition to a wide range of different cars, vans, trucks and luxury cars, Europcar offers wheelchair-accessible vehicles and vehicles pre-fitted with bike carriers, to get your other wheels on the road without a hassle.

Beyond the major rental car names, there are quite a few alternatives floating around that can offer something different, or overlooked local deals. Here are just a few of the more prominent companies to note:

Car hire: Things to be aware of

Whichever hire company you choose, it’s important to do your bit to ensure you’re not hit with any costly surprises before you pick your vehicle up, or after you drop it off again. Put simply, it means reading the small print! Hiring a car comes with a serious financial responsibility, so take the time to understand exactly what you’re signing up to. While most drivers return their rental car and leave without any worries, disputes are common. Canstar Blue’s 2017 survey of hire car customers found that 27% had to pay additional charges the last time they rented a car, either because they were accused of damaging the vehicle, or because they failed to stick to the terms and conditions of their agreement, such as refilling the car with fuel.

So, what should you do before hiring a car?

Make sure you refer to the condition report if you spot any damage to the vehicle, to make sure it’s already been noticed. If you have any concerns, take them up with the operator before you leave. When it comes to returning the vehicle, be sure to check your obligations. There is a long list of reasons why you could incur extra charges when hiring a car, so help yourself avoid them. You might be surprised to learn you can even be charged a fee for returning your vehicle early!

With all this said, the chances are your hire car experience will be an enjoyable one. But you’ll have more fun – and more money in your hip pocket – if you’re prepared.

Do you need insurance when you hire a car?

Insurance can be a scary subject if you’re not entirely sure where you stand. When it comes to hiring a car, it is not compulsory to buy insurance, but it is highly recommended, because failing to do so could turn into a costly mistake. The car you hire will be insured against any damage caused, but the excess on the policy can run into the thousands. And who pays for the excess in the event of an accident? You do. Insurance is there to cover the excess in case something goes wrong. However, the real question is: Should you buy insurance from the hire car operator?

Our survey found that more than half (57%) of hire car customers bought insurance from the rental company they booked through, with one third (33%) feeling it was unnecessarily upsold to them. While it can be convenient to take out insurance with the operator when you collect your vehicle, it can also be costly. That’s why it’s a good idea to do your homework in advance. Did you know many domestic travel insurance policies will cover you for hire car excess? Just under half (49%) of respondents to our survey were aware. That’s right, you can effectively kill two insurance birds with one stone, because it’s a good idea to take out travel insurance when you go exploring, and definitely the right move to cover yourself against hire car damage. Travel insurance is likely to prove cheaper than insurance from the hire car company, plus you get the extra benefit. If you don’t want to take out travel insurance, but do want to be protected from excess liability, you could also consider car rental excess insurance from a third party.

There are a lot of things to consider when renting a car, so it pays to do your research. The fact that you’ve found this page suggests you’re doing your bit, now you just need to pick a hire car operator that lives up to its end of the bargain.

Canstar Blue commissioned Colmar Brunton to survey 3,000 Australian adults across a range of categories to measure and track customer satisfaction. The outcomes reported are the results from customers within the survey group who have hired a rental car in Australia in the last 12 months – in this case, 603 people.