How reliable is your new car? Compare manufacturers based on reliability with Canstar Blue’s review and ratings.

How satisfied were customers with the Reliability of their car? 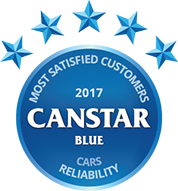 What good is a car if it isn’t reliable? In our reliability review, 4 out of 17 manufacturers received five stars for reliability – Mazda, Renault, Suzuki and Volkswagen.

The most reliable cars in Australia

As far as car ownership goes, there’s probably nothing more annoying than when you need to get somewhere but can’t because your car has broken down or can’t even start. The problems just seem to compound and can get costly. While new cars are less prone to this than used ones, the truth is there are some lemons out there and even new cars can be susceptible to faults. Luckily though, many cars these days are covered by warranties that will honour such unexpected breakdowns.

No matter what some life advice column has told you, you won’t impress your date, or your mum, with a cool car if you can’t even get it to start. You’ll make your date wish he/she took the bus instead, and your mum will be worried about you every time you’re on the road. So if you’re in need of a more reliable ride, surely the opinion of other motorists must matter.

Canstar Blue has surveyed over 2,500 new car owners to find out which manufacturers are most reliable. In this customer satisfaction ratings report, Mazda, Renault, Suzuki and Volkswagen were deemed to offer the most reliable new cars. So what drives these reliability rankings? There were some interesting statistics to come out of the survey:

So we’ve established that Mazda, Renault, Suzuki and Volkswagen were revealed to be the most reliable, so where do other marques stand?

Don’t panic if you own a Ford, Jeep or Kia. While the survey suggests customers aren’t as satisfied with the reliability of these makes, if you’re happy with your car then it makes no financial sense to jump into a brand perceived to be more reliable.

How to improve your car’s reliability

It was a mixed bag of results, with European marques often outperforming American companies. Japanese manufacturers tended to fare best though. However, no matter where your car originates from, if it’s not well-maintained then you can generally kiss goodbye to its reliability. If your car is under warranty, you likely have no option but to get it serviced through an approved mechanic, but there are a few things to keep an eye out for to prevent financial disaster before your next service:

Ultimately, you can safely assume that a new car will be a safer bet for reliability than an older, used car, whatever the make. Mazda, Renault, Suzuki and Volkswagen topped the ratings for reliability, with the most satisfied customers in this category. It pays to look at a range of vehicles and manufacturers when you buy a new car, but considering which makes have been deemed the most reliable may be a good starting point.

Canstar Blue commissioned Colmar Brunton to survey 9,000 Australian adults across a range of categories to measure and track customer satisfaction. The outcomes reported are the results from customers within the survey group who have bought a new car from a dealership in the last three years – in this case, 2,534 people.