Need a new ride for the family? Compare the biggest names in the sedan game with Canstar Blue’s customer review and ratings. 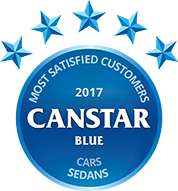 After a year away, Mitsubishi has returned to the top of our driver ratings for new sedans, scoring five-star reviews for value, driving experience and reliability, in addition to overall satisfaction.

Australian culture was practically built on the back of driving. We have a bunch of great, iconic highways, such as the Pacific, New England, Hume, Monaro and the gargantuan beasts – the highways across the Nullarbor Plain. Driving isn’t just a pleasure in Australia, it’s a necessity. And what better way to tackle all of that than in a sedan?

The humble sedan is an icon on Aussie roads and still remains a popular choice today. From tackling the local supermarket, to hitting the open road, Aussies love a comfy sedan. If a sedan is tickling your fancy, you’ll have a wide variety of different options to choose from – nearly every car manufacturer offers some sort of sedan. The question is, which one do you pick?

Buying a new car is nothing to sneeze at – it’s a costly and sometimes stressful endeavour. Canstar Blue aims to take a bit of stress out of the situation by providing these ratings reports to send you on your way sooner. Of the seven brands rated by Aussie motorists, only Mitsubishi earned five stars for overall sedan satisfaction. It also dominated in most other categories against some giant automotive players.

Mitsubishi is one of the largest automotive companies in the world, but biggest doesn’t automatically mean best. However, with five stars in most categories, Mitsubishi comes out strong in the sedan market. The results also suggest companies need to provide more than just value for money, because ‘driving experience’ was a far more important aspect according to those surveyed, and it makes sense. Everyone wants to get a good deal when they buy a new car, but no one wants to own a car they hate driving! A good driving experience is crucial.

So, it’s evident that Aussie motorists are more than just about getting the best ‘bang for buck’. They take pride in having a vehicle that’s not a total nightmare to drive. After all, there are so many roads and a lot of distance to cover in Australia, so why not try and drive something that’s comfortable and at least somewhat pleasurable?

Mitsubishi’s sedan range is based off one single model, which is pretty impressive considering the make’s high rating. That single sedan model is the Lancer – the legendary Lancer. It’s frequently touted as being one of the most reliable cars, and our ratings demonstrate that. From the humble, entry-level 2L variants that can be had for a steal, up to the Evolution editions fetching a pretty penny. The current Lancers are at the end of their model life, so keep an eye out for bargains leading into 2017. Additionally, the Evolution turbocharged super-fast model is being discontinued in 2017, so if you’re more after a rocket than a sleepy family sedan, it’s viable to get your hands on one of the most iconic rally cars ever. Mitsubishi’s sedan range is pretty limited – just the Lancer – but the specifications within that model range are varied enough to suit most tastes and budgets.

Why buy a sedan?

There are many reasons for buying a sedan. One of the main ones is that they are arguably the easiest and most abundant type of vehicle, and economy of scale can means your money can go further. What’s more is that cost of ownership is likely lower than an SUV/4WD or other type of car. Tyres, servicing and insurance could be cheaper! After all, pretty much any mechanic can work on a Mitsubishi Lancer, and they don’t demand too much in the tyre department. As for those surveyed who have bought a new sedan in the last three years:

While Mitsubishi earned five stars across most ratings categories, it wasn’t the only one to receive top marks in a specific area. Hyundai was also praised in regards to driving experience and value for money, while Toyota was the only brand to achieve five stars for point of sale service.

Bagging a bargain on a new sedan

A new sedan is likely to cost you around $30,000 or more, which is why many Aussies love to try and negotiate a bargain. And many have been successful in securing a great deal:

No matter your tastes and budget, the range of sedans for sale in Australia is vast and varied, so chances are there’s the perfect sedan out there for you. Buying a car can be a stressful time, and narrowing down a model can be difficult, as is the whole actual buying process. Sedans are a safe bet when buying a car, and our ratings suggest that Mitsubishi provides the goods when it comes to sedans. However, it’s worth taking a look at a range of models from the brands featured in our customer ratings. It could be the starting point that gets you into your desired car sooner. Hit the roads – Australia was made for driving!

Canstar Blue commissioned Colmar Brunton to survey 9,000 Australian adults across a range of categories to measure and track customer satisfaction. The outcomes reported are the results from customers within the survey group who have bought a new car from a dealership in the last three years – in this case, 641 people.