Looking for the perfect little runaround? Compare some of the biggest motoring names in Canstar Blue’s small car review and ratings. 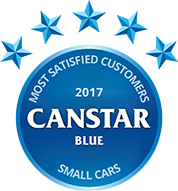 Form is temporary, class is permanent. Mazda and Suzuki have both returned to the top of our customer satisfaction ratings, cementing their place as two leading makers of small cars.

Mazda and Suzuki have a big reputation for small car satisfaction

Australia loves its big Aussie sixes and eights, but with the way fuel and the cost of ownership is rising, many people are looking for a cheaper alternative. Thus, there has been a huge rise in the number of small cars and hatchbacks on our roads over the last decade or so. Small cars present a fuel efficient alternative, while still retaining usefulness with their hatch design. Two manufacturers leading the charge are Mazda and Suzuki.

We can say that with confidence because Mazda and, for the second year in a row, Suzuki have topped our customer satisfaction ratings, based on the survey responses of hundreds of Australian motorists who have recently bought a new small car.

Mazda and Suzuki have plenty in common, other than the fact that they’re both Japanese brands. They both earned five-star reviews for overall small car satisfaction from their Aussie owners, in addition to that hugely important factor of reliability. They also both rated four stars on value for money. However, there were some small variations in the ratings:

Driving experience was found to be the greatest driver of customer satisfaction for owners of small cars. This is telling, as people obviously don’t want to compromise on things like comfort and driving dynamics just because they are in a small car.

Feeling like you’ve got good value for money is also a high priority for small car buyers. After all, they’re buying a small car and likely have a budget that reflects a desire for a cheaper price. That’s not to say they want an inferior product though.

Why buy a small car?

There are many reasons for buying a small car, and small cars have come a long way in recent years to offer little compromise between choosing one or another of its bigger brethren. One of the most glaring benefits is their small size. This lends itself to negotiating tight parking spaces and increased manoeuvrability. Interestingly, 28 per cent of survey respondents said their reason for purchasing a new small car was because their old car became unreliable – we suspect small cars offer a good, reasonably economical alternative to get them back on the road sooner.

Perceived reliability may also be a large factor. Both Mazda and Suzuki earned five stars in this regard. And given that respondents’ previous average ownership length was 8.1 years, it’s reasonable to expect that small car owners also have high expectations for their new purchase. This length of ownership is much higher than sedan owners (7.1 years) and 4WD/SUV owners (6.9 years), so it’s also safe to assume that small car owners are going to demand more longevity from their new wheels.

There’s a lot more than just the car itself that gets people tickled pink about buying their new small car. Often, the dealership you actually buy the car from is an important stepping stone into being happy with your purchase. Dealerships can frequently make or break the whole purchasing experience. A bad dealer could go so far as to sully your enjoyment of the car! Luckily, those surveyed generally thought point of sale service for their small car was pretty good. How the dealership conducts itself at the time of sale can drive overall satisfaction for small car buyers.

However, your experience with the dealer likely isn’t completed once you leave with your new car. Warranty periods, servicing and other issues often require a revisit to the dealership, so it pays to keep this in mind when you first visit.

There are a lot of factors that go into both purchasing and continuing to enjoy your new car. Luckily, our findings show that most small car owners are generally pretty satisfied with their new wheels and the service they received. While Mazda and Suzuki undeniably faced some great competition, the Japanese small car giants came out on top, and their five stars rating for overall satisfaction are rightly earned.

Canstar Blue commissioned Colmar Brunton to survey 9,000 Australian adults across a range of categories to measure and track customer satisfaction. The outcomes reported are the results from customers within the survey group who have bought a new car from a dealership in the last three years – in this case, 913 people.