Which manufacturers make your motoring dollar go a little further? Canstar Blue compares car makers on the value for money they offer.

How satisfied were customers with their car’s Value for Money? 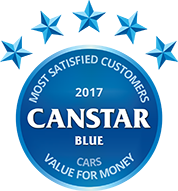 Buying a new car is expensive, so you’ll want to get the most value for money possible. From our survey, Hyundai has been deemed to offer the best value by Aussie motorists.

Buying a new car is one of the biggest financial decisions you’ll make in your lifetime. So it makes sense to seek the best value possible, right? That’s why Canstar Blue sought the opinions of more than 2,500 Aussie new car owners, to find out which manufacturers are deemed to offer the best overall value for money. Only one name received a five-star rating – Hyundai.

Hyundai takes over from little brother Kia in our value for money ranks. The two have both enjoyed great success in this area over the years, so there is definitely a trend that the South Korean brands are in sync with Aussie motorists. Interestingly, a lot of European marques are at the bottom of the table when it comes to value for money. Make of that what you will.

So what makes Hyundai such good value for money, with many satisfied customers?

Hyundai hones in on value for money models

Hyundai has come a long way from previous perceptions of offering ‘cheap and cheerful’ cars. While many of its new models are still cheap, they are now bursting in quality, with generally great reliability. So, you may find your dollar going further with Hyundai. Hyundai has a huge range of models, but below are some of the more popular ones:

Probably the most iconic hatchback on Australian roads in the last couple of years or so, the i30 is immensely popular. You get all the creature comforts like Bluetooth, smart display screen and voice recognition. Most models putting around are 1.8 litre petrol ones, retailing for under $25,000. You can also get a 1.6 litre turbo diesel if you desire that torque boost.

Premium models also come with a 2.0L petrol model, but these will set you back just over $20,000. You’ll either get a six speed manual or a 6 speed sports auto. Either way, the i30 is a sensible, economical hatch that won’t leave you feeling sluggish.

If your tastes are a little bit higher off the ground, choosing the Tucson soft roader may be more your style. If you want to pack up the kids and hit the open road, or simply do the school pickup, the Tuscon may be a good fit. The Tucson comes in two variants – a 2.0L petrol or 2.0L turbo diesel model. The petrol model is by far the cheaper of the two – often available for under about $30,000, and the turbo diesel runs around at under $48,000 or so. It’s got all the creature comforts you’ve come to expect in modern cars – Hyundai assures you of that.

If you want a good ol’ sedan, then the Elantra may be up your alley. The Elantra represents a good value, budget small sedan as many variants can be bought for under $30,000. The most common variant is the 2.0L petrol model running a 6 speed automatic. Think of it like a stretched-out i30. There is no turbo diesel variant, but the petrol model still offers adequate punch around town. You get all the regular entertainment options, and you also get a reverse camera/park distance aid to get you into those tight reverse-parking spots with increased peace of mind.

The Genesis represents Hyundai’s first real foray into the luxury car market. It has been met with much praise and is seen as a challenger to the traditional custodians of the luxury vehicle market with the likes of BMW and Mercedes. It also represents a challenger to Aussie rivals like the Holden Calais and Ford Falcon G6E. The Genesis sports a totally different badge to normal Hyundais at the front. The badge looks like something from a Bentley so the layperson driving towards you won’t even know you’re driving a humble Hyundai.

The Genesis is a luxury car with Hyundai reliability. It’s powered by a 3.8L V6 engine, and has more power on paper than any naturally aspirated V6 Ford Falcon or Holden Commodore variants. It also represents great value for money, as many similar European models go for over $100,000. The Genesis, on the other hand, can be had for less than $70,000, and with a 5-year/unlimited kilometre warranty, you’re also afforded peace of mind.

This is just a snapshot of the large range of vehicles that Hyundai offers. Hyundai has come a long way in the last decade or so, and we’re sure you’ll find value in at least one of its models. Even though Hyundai earned five stars for value for money, we suspect that by looking at a range of marques you’ll find something that suits you. We hope these value for money ratings can prove useful in your car hunt – if in doubt, looking to Hyundai may be an adequate starting point.

Canstar Blue commissioned Colmar Brunton to survey 9,000 Australian adults across a range of categories to measure and track customer satisfaction. The outcomes reported are the results from customers within the survey group who have bought a new car from a dealership in the last three years – in this case, 2,534 people.