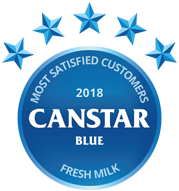 With 12 brands in the line-up, it was ALDI Farmdale that topped Canstar Blue’s customer ratings for fresh milk, achieving five-star reviews from shoppers on taste, value for money, packaging design and overall satisfaction.

ALDI Farmdale moo-ves to the top of fresh milk ratings

As a staple on many family grocery lists, milk is one that brings shoppers to the store on a regular basis. Because of this, supermarkets find themselves under pressure by consumers expecting quality milk without too much of a charge. But it seems that it’s not the price consumers are most concerned about but it’s the Australian dairy farmers who are losing the battle with supermarket giants. Our latest survey found that less than half of the respondents (42%) stated they buy whichever brand is cheapest, while a large chunk (68%) said they buy a brand of milk that they think supports Australian dairy farmers.

Canstar Blue’s annual report aims to put aside the type of milk consumers buy as well as how much they pay for it – but focuses primarily on which brands are rated highest across Australia based on their taste, value for money, packaging design and overall customer satisfaction. More than 2,000 Aussies took to our ratings this year to tell us about their recent purchase of fresh milk. There were 12 leading brands that received the minimum sample size to be included in the ratings table above. In 2017, both Norco and PURA shared the highest rating overall, but this year supermarket giant ALDI Farmdale took out the top spot, achieving five stars in all categories. Other key results included:

When you can pick up basics like milk for just a dollar at major supermarkets, including ALDI, Coles and Woolworths, it seems unlikely that the prices will rise anytime soon, which gives shoppers plenty of choice. But if you’d like to splurge out a little extra in hope for extra quality, it will ultimately be up to your budget for that decision.

If supporting local farmers is important to you, then it would be wise to do your research and go for a brand that supports your values. Most of the respondents to our survey (90%) feel that the supermarkets should be doing more to help Australian dairy farmers, with 68% of shoppers saying they’d be happy to pay more for a supermarket private label if some of the money went to the farmers.

About the winner – ALDI Farmdale

ALDI seems to be a clear winner for Aussie consumers in various supermarket categories, including:

ALDI Farmdale features a number of dairy products, including a range of milk variants from full cream milk to lactose free. Standard sizes include 1L and 2L bottles, but you can also buy 600ml individual cartons of flavoured milk.

Since ALDI’s first store opened up in 2001, it has had an earnest aim to work closely with Australian farmers and producers to build long-term relationships. It claims that 93% of its dairy products are Australian-made. It’s important, however, to do your research and go for a milk brand you’re happy supporting.

Canstar Blue surveyed 3,000 Australian adults across a range of categories to measure and track customer satisfaction, via ISO 26362 accredited research panels managed by Qualtrics. The outcomes reported are the results from customers within the survey group who have purchased and drunk fresh milk from a supermarket or grocer within the last three months – in this case, 2,125 people.