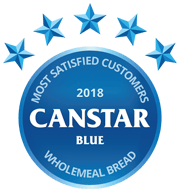 Helga’s has topped Canstar Blue’s customer ratings for wholemeal bread for the second time in a row. The brand achieved five-star reviews from customers on taste, texture, variety, freshness and overall satisfaction.

Many Aussie consumers are choosing to go with wholemeal bread for its perceived nutritional benefits, and with supermarket label competition heating up, you’re almost always guaranteed a loaf as cheap as chips! But if you’re a bread enthusiast, paying top dollar for the right blend of whole-wheat flour and grain may not seem much in your eyes when you know you’ll be making a top sandwich. Does paying a premium price really pay off? That’s a question our customer ratings are designed to answer. Do the big supermarkets deliver the goods, or are the big name brands a cut above the rest?

To find out, we’ve surveyed more than 500 shoppers across Australia to get their thoughts about the wholemeal bread that they most recently purchased and ate, with regards to its taste, texture, freshness and other factors. Seven leadings brands received the minimum sample size required to be included in the ratings, from supermarket giants to the biggest names in the bread world. Only one earned five stars for overall customer satisfaction – Helga’s.

So the answer to our question appears to be that paying a little bit extra for a quality cut of wholemeal bread can be worth it. However, you might struggle to declare it 100% value for money.

About the winner – Helga’s

For some, bread is just bread, but Helga’s begs to differ with its slogan – “It’s not just bread it’s Helga’s.” Inspired by European baking traditions, Helga’s claims to weigh grains by hand and bake its loaves in individual tins, putting the love and tender care back into your morning toast. It boasts the best natural and wholesome ingredients and it seems that this has been tasted well among Aussie consumers once again in this year’s ratings. Helga’s wholemeal bread is stated to give you 100% of your whole grain daily intake, containing a source of protein, a source of fibre and no artificial colour, flavours or preservatives.

Helga’s seems to be the Jack of all trades with its choices expanding to a black rye range, gluten free, wraps, Turkish bread and a new thick cut range coming out for café style toast. Its classic range alone is almost endless – mixed grain, white, light rye, soy & linseed, pumpkin seed & grain, wholemeal grain, and ancient grain with quinoa. So whether you’re a multigrain or white bread type, Helga’s has got you covered.

You may also be interested in our ratings for:

And before you head out to your local store, you may like to visit our customer ratings for online grocery shopping websites via the link below.

Canstar Blue surveyed 3,000 Australian adults across a range of categories to measure and track customer satisfaction. Data was collected use Qualtrics’ online sample aggregation from ISO accredited panels. The outcomes reported are the results from customers within the survey group who have bought and eaten packaged wholemeal bread from a supermarket or grocer in the last 3 months – in this case, 501 people.