You are vieing the archived BBQ ratings, To view the current ratings follow this link.

Show Important Notes^* Hide Important Notes^*
* Overall satisfaction is an individual rating and not a combined total of all ratings. By default, brands with equal overall satisfaction ratings are sorted by the mean overall satisfaction score as rated by consumers. You can click the arrows at the top of any column in the table to sort by the results in that column.
^ By clicking on a brand or ‘details’ button, you will leave Canstar Blue and be taken to our referral partner to compare. You agree that Canstar Blue’s terms and conditions apply to this referral. If you click on a brand that our referral partner does not cover, you will be taken to a brand page on Canstar Blue.
Canstar Blue research finalised in October 2018, published in October 2018. 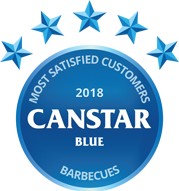 Ziegler & Brown has roasted the competition in Canstar Blue’s 2018 customer ratings for barbecues, scoring five-star reviews on cooking performance, design, durability, ease of cleaning, ease of use and overall satisfaction.

Ziegler & Brown cooks up a storm in BBQ ratings

One of the best things about Australia is that you can enjoy a barbecue with friends and family almost all year round. Enjoying the outdoors with a snag cooking on the barbie is a classic Aussie summer pastime, and it’s easy to see why. Who doesn’t enjoy the chance to get their grill on instead of staying cooped up indoors? So which barbecues are best at the job? To find out, Canstar Blue surveyed hundreds of Aussie households that have recently purchased and used a new BBQ, with their feedback reflected by the star ratings above.

The eight brands to receive the minimum sample size to be included in our 2018 BBQ review were rated in the following order for overall satisfaction:

Before we jump into what to consider when buying a new BBQ, let’s first take a closer look at each brand in our ratings.

Our review features eight brands, and while there are others out there, looking at these first may be a good starting point to help you decide which might be best for you. 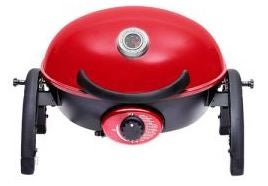 Ziegler & Brown is an Aussie brand that offers gas BBQs, with the number of burners ranging from one to six. There is the Ziggy range (portable), Turbo series, and built-in gas BBQs. Whether you’re looking for a BBQ to take with you camping, or you’re thinking a little bigger to impress the neighbours, Ziegler & Brown will have you covered. Its Turbo classic boasts a ceramic burner and quartz dome that increase radiant heat and minimises flare-ups. Despite the smaller size, the Ziggy burners are stated to have high dome roasting hoods for additional capacity. Prices start from $329 for its 1-Burner Ziggy’s and go up to $6,400 for a 6-Burner Grand Turbo model.

Weber has four main categories of BBQ – electric, charcoal, premium gas, and the famed Weber Q range. The electric range is its latest addition, featuring electronic temperature control and smart technology such as monitoring food from your smartphone. The charcoal range boasts authentic coal grilling for that unique smoky flavour, and if ashes are a concern, these beauties come with a cleaning system to make the after-cooking clean-up easier. The Premium Gas range is a more traditional ‘barbie’, with the Summit series dubbed the ‘holy grail of BBQs’. Some models are built-in, boasting up to six burners. The Weber Q is arguably the most popular series, suitable for small-time grilling, with many grills able to be placed in the dishwasher for easy cleaning. Prices for the top-range Weber Summit series cost in excess of $2,500, while Weber Qs start at around $300. 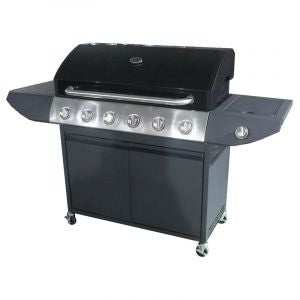 Jumbuck’s range mainly focuses on barbecues with at least two burners, though some come with up to six. In the range is a series of portable, kettle and charcoal barbecues that start at around $60. Flat top BBQs come with at least two burners, and with basic designs, many with hoods to promote roasting. For the more serious grill enthusiasts, six burner BBQs are on offer, starting from about $300. Jumbuck was one of the cheaper brands to be featured in our ratings. But from snags to roasts, Jumbuck’s barbecues are designed to handle it all. 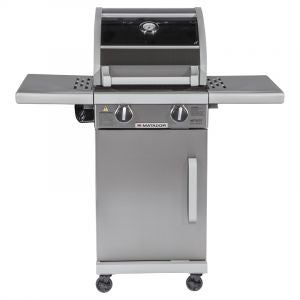 Matador produces a fairly concise range of barbecues, ranging in size from two to six burners. They are either standalone or built-in for those outdoor kitchen enthusiasts. Most BBQs are gas-powered, which is a popular choice in Australia. Matador is sold exclusively from Bunnings Warehouse hardware stores, making it easy to pop in and get your spanner and walk out with a BBQ. Two burner units start at about $500, while the top-of-the-range six burner units start at around $900. 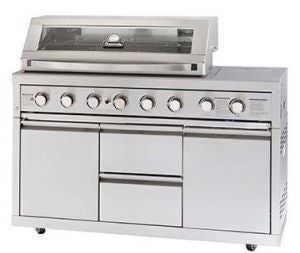 Gasmate splits its BBQs into two key categories – outdoor living and camping. The outdoor living BBQs range from the compact ‘Odyssey’ style, to the full-blown outdoor kitchen units. Traditional barbecues are also on offer, most being powered by gas. The Odyssey range represents a convenient and portable grilling option. The outdoor kitchen range is the ‘bees knees’ when it comes to outdoor cooking and would be suitable for a comprehensive outdoor setting for the modern home. Camping barbecues are also on offer, which usually feature only one burner. Traditional Gasmate barbecues are available from around $600, while portable barbecues are cheaper. Built-in, outdoor kitchen barbecues start at about $3,000 but require professional installation.

BeefEater sports a solid range of both mobile and built-in barbecues, most with shiny chrome designs resembling a premium option for your home. In the mobile BBQ range, BeefEater packs in two burners at a minimum, which makes it a strong candidate for cooking, and eating that beef. Most models are gas-powered and feature roasting hoods with an onboard temperature gauge and warming rack. The BeefEater mobile barbecues start at about $1,700 for the basic LPG five-burner units, while portable units are available from around $500. Built-in systems start at about $900.

Billabong offers a small range of BBQs at affordable prices, ideal for beginners. Its range features kettle models, an offset smoker BBQ, and a two-burner on trolley BBQ. While its range isn’t extensive, expect features such as an integrated warming rack to increase cooking volume or for roasting. In addition, its offset smoker model – pictured courtesy of Barbeques Galore – is boasted for a durable steel lid and firebox, enamelled steel grills and a temperature gauge. Prices sit between $70 and $300. 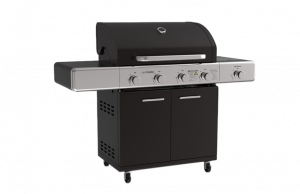 Whether you’re a masterchef or not, Beefmaster likely has a barbecue for you. It produces a relatively concise range of built-in and mobile BBQs, with four burners being the status quo. Most are finished in attractive black and stainless steel designs. All Beefmaster BBQs are gas-powered with LPG as standard, but natural gas conversions are also available. This requires a licensed plumber to install the conversion. Beefmaster mobile barbecues start from about $650, while built-in units start at around $550, which is right in-line with what our research suggests people are spending.

What to consider when buying a BBQ

With many factors to consider, the following guide breaks up the process into each aspect to help you find the right BBQ for your budget, needs, size and taste. Read on for all the details.

How much do BBQs cost?

Our survey indicates that Aussies spend an average of just over $500 on new BBQs. This is obviously a fair hit to the hip pocket, so it pays to get your purchase right. Factors that will affect the price of BBQs include:

Aside from cooking some snags and steak, BBQs are often as much of a social statement as they are about cooking food. More than a quarter (28%) of respondents to our survey said they bought a BBQ to impress friends and neighbours (i.e. a status symbol). A half said they don’t use their barbecue as much as they thought they would, so that $500-odd price tag could in fact be going to waste.

How do I choose the right BBQ? 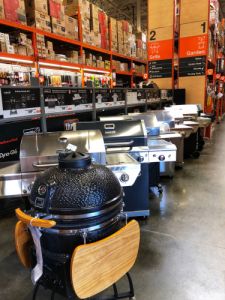 There are a few questions you’ll need to ask yourself to make sure you choose the right barbecue for you, and don’t end up wasting money on something you don’t need. Our survey indicated some key drivers of satisfaction, listed in order of importance:

Above all, cooking performance is the most important factor in driving BBQ satisfaction. Design was the second most important, which is understandable given that it can affect the overall experience, as well as how easy it is to clean once all the cooking is done. Four in five (79%) clean their BBQ regularly, so having a well-designed model without any hard to reach compartments might help with this.

Below is a list of considerations you may want to run through before purchasing a new BBQ.

There are three main types of BBQs to choose from: 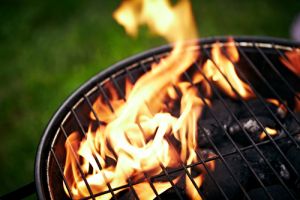 The debate over which produces the better flavour – charcoal or gas – has been ongoing ever since both types existed. If you want to be able to grill without getting a smoky flavour, go with gas.

How many BBQ burners do I need? 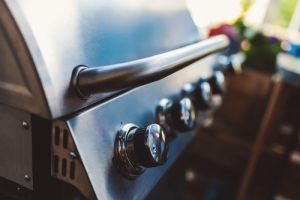 Consider how much food you’ll be barbecuing at once. Another way to think about it is to consider how many people you’ll usually be cooking for. There’s no point having a massive barbecue just to feed two people. 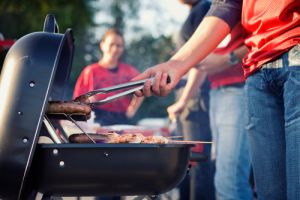 Our survey indicated that 64% of Aussies said features were the primary reason for choosing their BBQ, so it’s certainly something to consider thoroughly. These are some of what you might come across:

What food can I cook on my BBQ? 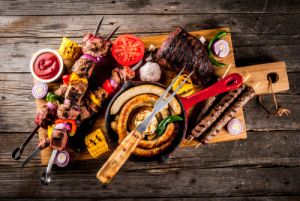 You can grill pretty much anything that won’t fall, melt or disintegrate through the bars or mesh. Vegetables grilled on a BBQ have a different taste and texture, particularly those that go very well with smoky flavours, such as mushrooms and eggplant. Pineapple is a classic barbecue staple, as the flames caramelise the sugars for a fresh, sweet and juicy addition to your burgers or kebabs.

We asked our survey respondents about what food they generally cook on their BBQ and they reported:

Despite the Aussie stereotype about shrimp, snags are what Aussies prefer! It’s certainly an easy BBQ choice across backyards and decks across the country.

Canstar Blue surveyed 6,000 Australian adults across a range of categories to measure and track customer satisfaction, via ISO 26362 accredited research panels managed by Qualtrics.. The outcomes reported are the results from customers within the survey group who have purchased a new gas or electric barbeque in the last 2 years – in this case, 849 people.