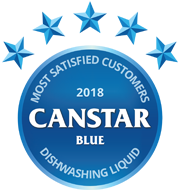 In a large market, ALDI Unamat has claimed top spot for dishwashing liquids, with Aussie consumers rating the brand five stars in multiple categories, including value for money and overall satisfaction.

While most of us look forward to meal times, when the plates are cleared away we’re often left with a pile of dirty dishes, waiting to be cleaned. While many households will have a dishwasher to take care of the after dinner mess, some stick to the traditional method of handwashing, meaning that dishwashing liquid is an essential for households. Even if you own a dishwasher, you might still wash by hand to start with.

While choosing a particular dishwashing liquid may seem like an easy option, when you stroll down your local supermarket aisle, you’ll often be met with a wall of different options, making the decision a bigger task than you initially thought. As a result, finding one to use, and continuously use, becomes almost as big of a chore as washing the dishes themselves.

In Canstar Blue’s latest survey on dishwashing, 69% of respondents stated that they had used more than one brand of liquid to find out one that works best for them, with 58% saying that they always stick with the same brand – meaning that once we find one that works, we don’t often deviate from it.

Of those who always buy the same brand, about one in five respondents (19%) said they do so because it’s the cheapest, while 11% believe theirs to be the most environmentally friendly option, and a further 38% always pick the same one because they know it works well. In addition, 22% simply said they know and trust the brand, while 9% pick theirs based on it being gentle on their skin.

If you need a little help picking the right brand for your needs and budget, our latest review of 12 brands may be able to help. These ratings are based on the experiences of more than 2,200 Australian adults.

Spoilt for choice, consumers may find it tough to find a particular brand to stick with. Read on to find out just what’s on offer in the dishwashing aisle at your local supermarket.

Generally the cheapest dishwashing option at ALDI, Unamat claimed top spot in our latest review, with five stars for overall satisfaction, ease of use, as well as the only five-star result on the value for money. At your local ALDI store, you can pick up a 1L bottle for less than a dollar. While you may not expect such a cheap choice to be especially eco-friendly, the Unamat formula is said to be phosphate free, greywater safe and biodegradable.

ALDI Green Action is made from biodegradable, plant-based surfactants and is phosphate free, suitable for greywater use, and septic system safe. You can pick up a recyclable PET plastic bottle in a choice of lemongrass & kaffir lime, pomegranate & mango, and vanilla scents. Consumers have rated ALDI Green Action four stars for overall satisfaction, scent and environmental friendliness, with three stars in all the remaining categories.

Another ALDI product to score highly in this year’s results, Tandil Ultra scored a consistent four stars in all categories, helping secure ALDI’s position on top of the supermarket brands. Tandil Ultra is claimed to be tough on grease and long-tasting, to get your dishes clean without a hassle. There are three different scented formulas to pick from – lemon, lemon & lime and orange citrus – plus the Powder Soak n’ Clean formula designed for tougher baked-on food. All three products come in 450mL bottles.

For a no-frills detergent with a lemon scent, Coles Dishwashing Liquid costs just a dollar for a 1L bottle. Despite being cheap and simple, it’s done quite well in this year’s ratings, with four stars overall, as well as four stars for environmental friendliness. The next price point adds an extra 60 cents to nab a litre of Coles Super Strength dishwashing liquid, also in lemon, giving consumers a few options to choose from.

While the most expensive Coles option for consumers, (although still fairly cheap in comparison to other brands), Coles Ultra comes in 450mL and 900mL bottles, with a choice of lemon, lime, or sensitive. Coles Ultra scored four stars across every category, making it the most highly ranked Coles brand dishwashing liquid in terms of performance across multiple variables.

Arguably the biggest eco-friendly option on the market, Earth Choice dishwashing liquids are all claimed to be plant-based, greywater and septic system safe, biodegradable, Choose Cruelty Free accredited and Australian made and owned, packaged in fully recycled bottles, so it’s no surprise it was the only brand to score five stars for environmental friendliness. Earth Choice also remains one of the most affordable choices when it comes to the big name brands. Earth Choice dishwashing liquid comes in plenty of fruity scents, plus a fragrance-free option for those with sensitive skin.

It’s been washing dishes for over a century, and Fairy still keeps it old-school simple, with two different dishwashing liquid formulas to pick from – Regular, in original or lemon scents, plus Platinum in a lemon scent. Fairy is also helping fight back against pollution by using 25% post-consumer recycled material in its packaging, with the aim to move that up to 100% renewable or recycled packaging in the future. Fairy improved on last year’s results, scoring four stars for overall satisfaction, as well as five stars for ease of use.

Offering one of the largest ranges of dishwashing liquids of any brand, Morning Fresh scored well across the board in this year’s results. Morning Fresh dishwashing varieties cover regular, ultimate, advanced, antibacterial and eco formulas, with the latter made of plant-based, biodegradable and septic tank safe ingredients packaged in a recycled bottle. Across the large range, all the usual original, lemon, lime and fragrance-free scent choices are covered, plus orange & tea tree, jasmine, white tea and eucalyptus. The bottles can be found in a range of sizes, from a handy 350mL bottle up through a bulk-buy 5L pack.

It seems only a natural progression for one of the longest-running soap companies in Australia to turn its hand to cleaning our dirty dishes as well. The Palmolive product range covers the regular formulas, ultra concentrates, ‘Fusion Clean’ baking soda combos for tough cleaning, as well as ‘Divine Blends’ for those who want to feel like they’re in a cloud of perfume while scrubbing pots and pans. Palmolive picked up five stars for effectiveness this year, as well as final result, ease of use and scent, while scoring four stars for overall satisfaction.

Available in 1L bottles, Coles SmartBuy is available in Lemon, meaning if you’re after something specific such as a different scent, or a sensitive option, you may have to go down a different path. Earning three stars for overall satisfaction – and the majority of categories – Coles SmartBuy was rated four stars for value, with consumers able to pick up a bottle for around $1.

If you’re after a simple option, Woolworths Homebrand may be the dishwashing liquid for you, with the Homebrand line only available in lemon, with 1L capacities. While it may not boast similar varieties and environmental-friendly packaging as other brands, Woolworths Homebrand – the cheapest private label brand from the supermarket giant – recorded three stars in every category this year, except for value for money, where it gained four stars.

Offering more options than the Homebrand variety, the Woolworths Select dishwashing liquid comes in 450ml and 900ml capacities, with lemon, lime and antibacterial varieties all available for consumers to choose from. Woolworths Select scored slightly higher than its Homebrand counterpart, with four stars on value for money, scent and environmental friendliness. However, it still achieved only three stars for overall satisfaction.

Which dishwashing liquid should I use?

While doing the dishes might seem a mundane task, using a dishwashing liquid that doesn’t do the job makes it all the more frustrating, meaning that you’ll have to be sure that you pick one that works every time. With plenty of options on the market readily available for purchase, choosing one will likely come down to your personal preferences. This could mean choosing one that you particularly like the smell of, or one that’s kind to your skin. Or perhaps it simply comes down to cost. Whatever the case, if you don’t feel like you’re getting good value for your money, it could be time for a change.

Canstar Blue surveyed 3,000 Australian adults across a range of categories to measure and track customer satisfaction, via ISO 26362 accredited research panels managed by Qualtrics. The outcomes reported are the results from customers within the survey group who have purchased and used dishwashing liquid in the last three months – in this case, 2,220 people.