Compare insect sprays ALDI Atlas, Coles, Mortein, Pea Beu, Raid and Woolworths on a range of factors, including effectiveness, smell, ease of use, value for money and overall satisfaction. 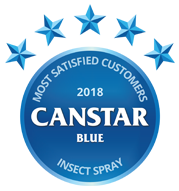 For the third year in a row, ALDI has been awarded the top prize in customer satisfaction for bug spray, with five stars across multiple categories, including value for money, ease of use and effectiveness.

ALDI rated No.1 for fighting off the bugs

Australia is known for its wide variety of wildlife, with plenty to be fascinated by. Unfortunately, Australia is also home to plenty of insects, which have a habit of ruining picnics and outside lunches, as well as making themselves unwanted houseguests. As a result, many households turn to insect sprays for protection, but with plenty of options on the market, all boasting to keep your house insect-free, it can be tricky to narrow down which one is best for your house.

In a Canstar Blue survey, 39% of survey respondents bought a ‘one-for-all’ insect spray but found some insects still survived, while 16% of all respondents resorted to using other sprays, such as deodorants, when they ran out of insect spray. However, once respondents found a brand that worked, 49% stuck with it.

In a wide market, consumers have stuck with last year’s joint winner ALDI, with the supermarket chain claiming five stars across a variety of categories. Survey results include:

Read on for details about what each brand offers in the way of bug-zapping.

Continuing its form from last year, ALDI Atlas has again retained the top spot for overall satisfaction, with the top result in every category except for scent. Offering a wide variety of products for all insect types, including Fast Knockdown, Flying Insect Spray (pictured) and Cockroach Spray, ALDI Atlas has what you need to keep your whole house covered.

Available in 300-350g cans for only a few dollars, ALDI Atlas may be a worthwhile addition to your shopping cart.

In this year’s results, Coles was one of only two brands to score five stars on value for money, with the supermarket chain also scoring four stars for ease of use and overall satisfaction. However, it did also score three stars for effectiveness, as well as two stars for scent, the lowest in the results.

Woolworths stocks a variety of sprays to take care of all insect types, including the Multipurpose spray, Fast Knockdown and High Performance Surface Spray. All are available in 300g or 350g cans, and will set you back a few dollars, meaning you can save your family from insects without breaking the bank.

A brand that many Australians turn to, Mortein has long been associated with an insect-free household, offering a huge variety of sprays to combat all types of insects. Regardless of what insect problem you might have, or are looking to prevent, Mortein has got the product for you. With a range that includes Protect Barrier to stop insects from getting inside in the first place, as well as Easy Reach Surface Spray for those hard to reach areas, Mortein also has the classic multi insect killer, flying insect killer and the crawling insect killer.

For those sensitive or worried about bug sprays, Mortein also provides low allergenic and odourless varieties, as well as the Powergard range for rapid action (pictured). Rated five stars for effectiveness, Mortein was also rated four stars for ease of use, but three stars across the remaining categories.

Another well known brand, Pea Beu has been around for decades, helping families and households stay insect-free. While it doesn’t have the variety of products other competitors have, Pea Beu has odourless options for those conscious about sprays, as well as varieties to take care of both crawling and flying insects. For those looking to mask the smell, Pea Beu also comes in Lemon, helping to keep the air fresh as well as insect-free. Pea Beu sprays are available in 350g cans, and will set you back around $5.

With a range that rivals Mortein, Raid offers a product regardless of your insect problem. With sprays to counter ants, flies, mosquitoes, cockroaches, spiders and all other types of insects, Raid offers sprays for surfaces, as well as indoor and outdoor varieties. Its ‘one shot’ spray is pictured.

Raid also offers odourless sprays, as well as the Earth Options sprays, which utilises Pyrethrins, nature’s own insect protection, instead of synthetics. If you’re looking to be a bit more proactive, Raid also offer DIY Outdoor Home Surface Spray to ensure that every crack on your house’s exterior is insect proof.

Scoring five stars for ease of use, Raid was also awarded four stars for effectiveness, with three stars for value for money, scent and overall satisfaction.

Choosing your weapon of choice

With the diversity of products and brands on offer, finding one that will do that job might be an overwhelming task for some consumers, particularly with the added stress of knowing that insects may be running rampant through your house. With 63% of respondents stating that they tried to avoid using insect sprays where possible, and 28% of all respondents refraining from using insect sprays on certain insects, it’s clear that sprays aren’t always a popular option for some households.

However, insects also aren’t a popular option for households, so it’s best to arm yourself with some insect spray to ensure that insects don’t keep coming back. With plenty of options available, consumers can choose a spray to take care of a specific insect problem, or simply have one handy to take care of anything that pops up uninvited.

Canstar Blue surveyed 3,018 Australian adults across a range of categories to measure and track customer satisfaction, via ISO 26362 accredited research panels managed by Qualtrics. The outcomes reported are the results from customers within the survey group who have purchased and used insect spray in the last six months – in this case, 768 people.