Show Important Notes^* Hide Important Notes^*
* Overall satisfaction is an individual rating and not a combined total of all ratings. Brands with equal overall satisfaction ratings are listed in alphabetical order.
^ By clicking on a brand or ‘details’ button, you will leave Canstar Blue and be taken to our referral partner to compare. You agree that Canstar Blue’s terms and conditions apply to this referral. If you click on a brand that our referral partner does not cover, you will be taken to a brand page on Canstar Blue.
Canstar Blue research finalised in May 2018, published in May 2018. 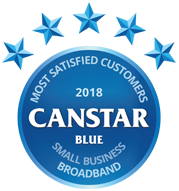 For the fifth year in a row, iiNet has been rated highest by business internet customers. It leads the way in overall satisfaction, value for money, contract clarity and bill clarity.

In this century, businesses need an internet connection to survive. Whether it’s organising rosters, doing the pay run, emailing staff, operating point-of-sale systems, or whatever else, businesses in Australia can thrive with a solid broadband connection. As they say, a business is only as good as its communications, and having reliable and fast internet is a sure-fire way to keep communications flowing. If you and your business are unsatisfied with your internet provider, our 2018 review and ratings may be able to help.

Canstar Blue annually surveys hundreds of business owners and key decision makers in Australia to find out which internet providers are coming up trumps, and which are more like a bump in the road. This year, iiNet has made it five years in a row at the top of the business internet standings, rated five stars for overall customer satisfaction, as well as contract clarity, bill clarity, customer service and value for money. iiNet dominated most categories, but another provider had some noteworthy results:

IiNet has traditionally been a strong performer in Canstar Blue’s customer ratings for internet providers, whether it’s ADSL/Cable or National Broadband Network. Our business internet ratings include all kinds of broadband connections in Australia.

If you need a little extra help picking the best internet provider for your business, read on for details on what the four telcos in this year’s review have to offer.

There is a diverse range of internet plans on offer for businesses big and small. Here is an overview of what the biggest internet providers in Australia have to offer your business.

iiNet has a range of business-specific broadband plans. Like its plans for regular customers, prices start at just $60-odd a month, which encompasses ADSL and basic NBN plans.

iiNet seemingly benefits from having dedicated business support on hand when it’s needed, plus speed boosters for uploading. Plans are available with no lock-in contract, or over 24 months. There are also international call add-ons available if your business deals beyond Australia.

iiNet was a firm favourite among business owners in 2018, rated five stars for overall satisfaction and for value for money, contract clarity and bill clarity.

Most of Optus’ business broadband plans are pretty much the same as its regular plans, with unlimited data starting from just $75 a month across NBN, ADSL and cable connections (and $65 for mobile customers).

Optus was a solid performer across all categories in 2018, earning four stars for overall satisfaction and notably achieving top marks in customer service, value for money, network performance and bill clarity.

TPG has a large array of business internet solutions, including NBN plans, standalone ADSL plans and Ethernet plans at either 10Mbps or 20Mbps in download speeds. Unlimited data on the NBN starts at around $70 a month and for that you also get no lock-in contract.

Regular business ADSL is also much the same as TPG’s consumer plans. TPG was rated four stars overall in our 2018 review, and for value for money, contract clarity and bill clarity.

Telstra claims to be the ‘network without equal’ and uses this as one of its main selling points for Aussie business customers. Telstra provides a total telco solution, with NBN, ADSL, mobile and business phone plans on offer, as well as cloud services and eCommerce facilities. Plans are pretty on-par with Telstra’s regular broadband line-up, with 500GB costing about $80 a month on NBN Tier 3 speeds.

You also get unlimited uploads, as well as 24/7 customer support, which shouldn’t be overlooked.

Telstra was rated three stars for overall satisfaction and in most other research categories this year.

The National Broadband Network is not far from completion. Already, 38% of businesses surveyed use the NBN, while 43% still use ADSL. It’s not all rosy, however:

Nearly two thirds (63%) are concerned about the impact the NBN could have on their business. Despite the concerns, however, once up and running, 56% noticed an improvement in internet speeds once they switched over to the NBN.

Choosing an internet plan for your business

No business should have to put up with a subpar internet plan. Often, the internet is the lifeblood of a business, and having a lacklustre plan can be both frustrating and financially impairing. Unfortunately, only one provider in this year’s review was rated five stars in terms of network performance.

Nevertheless, for a good all-round package, iiNet was a clear winner for overall customer satisfaction – for the fifth year in a row. Once could be luck, but five years on the spin is clearly a trend. Setting up a business is hard enough in the first place; don’t let internet cause you any unnecessary headaches. It pays to shop around, and maybe our 2018 ratings will help.

Canstar Blue commissioned Colmar Brunton to survey 818 Australian small to medium-sized business owners or key decision-makers (i.e. the key decision-maker for the business) across a range of categories to measure and track customer satisfaction. The outcomes reported are the results from customers within the survey group who currently have a business broadband plan and the business pays the bills – in this case, 493 people.