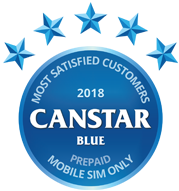 For the first time, Boost Mobile has topped our customer ratings for prepaid phone plans, earning top marks in key areas such as network coverage, customer service and billing.

What a boost! Boost Mobile rated best for prepaid plans

If you want maximum flexibility, control and value for money, a prepaid mobile phone plan could be the way to go. Once the ugly duckling of mobile plans, many prepaid deals now offer awesome value for money without locking you into a contract. There’s also no chance of bill shock, as you simply get what you pay for. Activating a new plan is incredibly easy and you can switch service providers in no time at all if you find a better deal. All the big telcos offer prepaid plans; but as our customer ratings suggest, you could bag an even better bargain by comparing some of the smaller providers, too.

With so many prepaid providers competing for your business, finding the best deal for your personal needs and preferences can become a real challenge. That’s why we provide an annual review of prepaid mobile providers to see which are stacking up best on important factors like network coverage, ease of recharging, customer service, and value for money. The idea is to give you as much information as you could wish to receive, so you can make the best-informed decision you can.

Boost Mobile replaces ALDI Mobile at the top of the prepaid standings after the discount supermarket chain’s four-year spell of success.

So, it’s evident that Boost Mobile faced some stiff competition, but what are the providers offering in terms of their plans? Below is a brief glimpse into what these eight providers are offering. Read on for more specific details from each brand.

When you’re comparing prepaid phone plans, price isn’t the only thing you need to consider. While you can easily pick up a cheap prepaid plan for $10 or less, some of these plans might have a shorter expiry period, such as seven days, which would require several recharges over one month. If you’re looking into prepaid plans for the long term, you might be better off with an expiry period of 28 or 30 days.

Below are selected published deals from the prepaid providers on our database, listed in order of price, that include a link to the retailer’s website for further details. These are sponsored products but you can use our comparison tool to find more plans from other providers.

Boost Mobile operates on the Telstra network and is in fact the only provider aside from Telstra to get FULL access to the network. Other carriers only use parts of the Telstra network, meaning total coverage could be compromised out in the bush. Boost Mobile has five prepaid plans, starting at just $10, all the way up to $70. Like with Telstra, Boost Mobile comes with data-free music streaming and international call allowances on all plans.

ALDI Mobile has long been a strong contender in our prepaid ratings, and like Boost, uses the Telstra network. ALDI SIM cards can be picked up in-store for $5 upfront, but this is $5 of pay-as-you-go (PAYG) credit so you can use your service straight away. ALDI Mobile plans start at $15 and all Value Packs come with unlimited calls and SMS. All five plans include data rollover and all but the $15 plan, includes unlimited international calls to select countries.

Kogan is perhaps more famed for its online retail business, selling cheap TVs and other bargains, but its prepaid phone plans are also very competitive with decent data inclusions for good prices. Kogan Mobile is also one of the few providers to offer bulk-buy discounts, whereby customers can prepay for 90 or 365 days upfront and save money in the long run. Kogan Mobile uses the Vodafone 4G network.

Amaysim focuses on providing good value for money with six prepaid plans starting at $10 and going up to $50 on 28-day billing periods, with automatic renewals. All plans come with unlimited calls and texts and the data inclusions start at 1GB and go up to 60GB. Amaysim operates on the Optus 4G network and has historically been a great performer in our ratings.

TPG offers five plans, which run on the Vodafone network. The $1 plan operates as a pay-as-you-go (PAYG) plan, while the other four run as standard prepaid plans. These plans start at $19.99 for 4GB data and go up to $39.99 for 20GB of data. Three out of the four plans also include a small amount of international minutes. While these plans run over a 30-day expiry with no minimum term, TPG will sometimes offer discounts over the start of your plan, which could be a good enough saving to keep you around for a bit.

Telstra is yet another provider with a large array of prepaid plans, with its Max plans arguably being the most competitive. Plans start at $10 and go up to $300 but they all have different expiry periods. All plans come with unlimited calls and SMS, along with access to sports streaming including the NRL and AFL, free access to Telstra Air WiFi data and data-free music streaming. If you think of Telstra as more of a ‘lifestyle’ product than just a strict phone plan, the big blue telco stacks up pretty well.

Vodafone has a few prepaid plans available, with the option to bulk-buy multiple recharges in one go to save a bit or money, which effectively turn them into long-term plans. Its data-focused combos start at $30 which runs over a 28-day expiry and if you time it right, you might be able to score some bonus data if its currently on offer. The other two plans have 35-day expiries, which means if you find you’re running low on data by day 28, those extra 7 days may provide more value.

Optus is another provider that has a large range of prepaid plans. Arguably the most exciting range is the ‘Epic Data’ set of plans, which come with a fair amount of data as the name suggests. Plans here start at $10 over a 5-day recharge period. All plans of $30 and up come with unlimited calls and texts, and users get an extra 10GB to use solely for streaming Netflix, Stan and ABC iView. If you’ve a penchant for streaming on your commute or when out and about, these plans could be for you.

Prepaid mobile phone plans are typically the least complicated type of phone plan, simply delivering a service for upfront payment. While most prepaid mobile plans are available a 28 or 30-day basis, several other shorter and longer alternatives are also available. Some providers have plans with just a one-day or two-day expiry period, while others have year-long expiry periods. Shorter-term plans are especially ideal for overseas visitors. Many telcos also offer pay as you go (PAYG) plans, which let you purchase a set amount of credit to use however you see fit or you pay for what you use.

With prepaid plans, it’s very much a case of what you see is what you get. Once you’ve run out of credit or used up all of your call time, texts or data, you will need to purchase a temporary add-on or recharge your plan again. This is in contrast to postpaid plans, with which you are charged extra when you exceed your plan’s limitations.

The greatest advantage of prepaid mobile plans is that you have complete control over your spending, with no bill shock at the end of the month. If you want a break from your service because you’re going overseas, or just want to save some money, you can simply not recharge. With postpaid plans, you are automatically billed every month, even if you hardly use your plan inclusions.

However the main disadvantage of prepaid mobile plans is there is no safety net if you run out of credit and can’t afford to buy an add-on or recharge. With postpaid plans, you can make calls, send texts or use mobile data and simply pay for it later, which might be easier to budget for. Prepaid phone users are more likely to go long periods without a service because they have run out of credit.

There are pros and cons to prepaid and postpaid services, but the advantages of prepaid seem to outweigh the negatives. You get maximum flexibility and control over your spending, you’re not tied into a contract, and you will usually get fantastic value.

If you’re set on a prepaid mobile plan, we hope you find what you’re looking for at Canstar Blue.

Canstar Blue surveyed 6,000 Australian adults across a range of categories to measure and track customer satisfaction, via ISO 26362 accredited research panels managed by Qualtrics. The outcomes reported are the results from customers within the survey group who currently have a prepaid mobile phone plan in their name and they pay the bills – in this case, 1,909 people.
Brands must have received at least 30 responses to be included. Results are comparative and it should be noted that brands receiving three stars have still achieved a satisfaction measure of at least six out of 10. Not all brands available in the market have been compared in this survey. The ratings table is first sorted by star ratings and then alphabetically. A rated brand may receive a ‘N/A’ (Not Applicable) rating if it does not receive the minimum number of responses for that criteria.