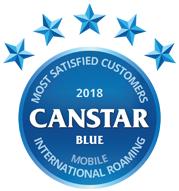 It’s a two-horse race in our inaugural ratings for travel SIMs and mobile international roaming packs, with Optus and Vodafone leading the way on customer satisfaction.

Wheels up! Optus and Vodafone jet ahead with international roaming

Ever wanted to Boomerang your way across Europe, or refer to place names as if they were people? “Thanks for having me, Dubrovnik!” you say as you upload yet another picture to Instagram. With the rise of international travel, the need for having a mobile phone plan to use overseas has also increased.

These days, travel SIMs and international roaming packs are abundant. They make it easy to prepare for your international trip before you jet off – so as soon as you land, you can turn on your mobile and away you go. Gone are the days when you’d get by with a dinky map and scrawly postcard home to your family – these days, you can use your phone plan as normal and often at a decent price.

However, not all travel SIMs and international roaming packs are made equal. That’s why, at Canstar Blue, we sought the opinion of hundreds of jetsetters to get their views on the best travel SIMs and roaming packs they’ve used. In our first ever such ratings report, we’re pleased to announce that both Optus and Vodafone have taken out top spot for overall customer satisfaction.

In third spot was Australia Post’s own Travel SIM product, which got four stars overall, yet achieved top marks in customer service and for its app/website. Telstra rounds out the list with three stars for overall satisfaction. So, who offers what? Read on for details as we explain what these providers can do for you the next time you head overseas.

Vodafone is well-renowned for its ‘$5 a day’ roaming deal, and for good reason. For just $5 per day, you can use your phone plan as normal. This is for postpaid plans and excess data is charged at $10 per 1GB as normal – it’s just like using your phone plan in Australia. The USA, Canada, most of Europe and much of Asia are available on the $5 roaming deal.

For prepaid plans, roaming add-ons start at $25, through which you get 100MB of data, 30 talk minutes and 30 SMS, which lasts three days. Note that the plans below are Australian 12-month SIM-only postpaid plans; the $5 roaming deal is an optional add-on and an additional cost.

Telstra is another provider that has a ‘$10 a day’ add-on to its postpaid plans. Called the ‘International Day Pass’, this pack is easily activated in the Telstra app, or through account settings. The International Day Pass can be used in a wide subset of countries, and gets you unlimited talk & text, plus 200MB data per day. An additional 500MB for use within 31 days, costs $10. Much of Europe and Asia, as well as North America, are part of the deal. The rate is lowered to just $5 if you want to roam in New Zealand.

For countries outside of the International Day Pass parameters, ‘pay as you go’ rates will apply, which will vary from country to country. The plans below are Telstra’s month-to-month postpaid plans; the $10-per-day roaming pack is an optional, additional expense to these plans.

On Optus’ 12-month postpaid plans, the telco has a dead-simple approach to international roaming.

If you’re looking at a SIM-only postpaid plan, you’ll be able to get 4GB of roaming data and unlimited standard national and international calls and SMS in Zone 1 countries on the $50 plan. Note that plans below are Australian 12-month postpaid plans — the $10-per-day roaming feature can be added-on as an option through the app or website.

Prepaid Epic Data and Epic Value customers can access a $20 Data Roaming Add On with 10GB of data to use in Hong Kong, New Zealand, Singapore, the UK and USA over five days.

The company that delivers much of your mail also has a small range of travel SIMs. Unlike with Optus and Vodafone, these are prepaid travel SIMs, where you get a new number and preload a set amount of credit. Starter Packs start at $25, through which you get $5 included credit – you can then preload more credit. It can be used in over 190 countries, and ‘pay as you go’ rates start at 25c per text, per minute of calling and 25c per megabyte of data.

However, in some other countries you could pay up to $4 for each of these. Most European nations are available in the 25c bracket. To make planning easier for family travel, the $50 Prepaid TravelSIM Value Pack includes two SIM cards with 1GB of Euro Data split between the cards. To make it easier for those travelling across Europe, you can add on one of the European Data Packs with cheaper rates per MB of data in eligible European countries. Data packs are $25 for 1GB, $65 for 3GB and $100 for 5GB of data.

Why do Aussies use travel SIMs and international roaming? 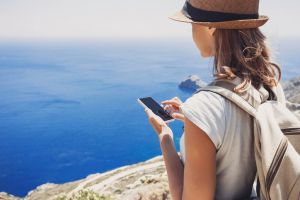 Travel is expensive enough without having to rack up a huge phone bill, too. You’ve no doubt heard horror stories in about friends and family who went overseas only to return home with a $1,000+ phone bill. Nowadays, this can be mitigated through the use of prepaid travel SIMs as well as international roaming add-ons from the big telcos.

More than half of survey respondents are also experienced in international travel – 55% have used their travel SIM or roaming pack in multiple countries. With that said, there’s not much use for talk and text, as nearly two thirds used their plan more for data.

Nearly half of survey respondents bought their travel SIM or add-on through their phone provider at home. That’s certainly convenient, but make sure you compare your options before making a decision because you may find better value elsewhere.

Aussies love to travel overseas, but evidently don’t want to pay an arm and a leg for traditional roaming! Our user ratings provide a helpful guide as to which travel SIMs and roaming packs are offering the best value, because they are reviewed by people who have actually used them! With that in mind, we hope you find this comparison helpful.

Canstar Blue surveyed 6,000 Australian adults across a range of categories to measure and track customer satisfaction, via ISO 26362 accredited research panels managed by Qualtrics. The outcomes reported are the results from customers within the survey group who have purchased and used a SIM Card or roaming pack specifically for the purpose of overseas travel in the last 2 years – in this case, 758 people.