In 2015, we surveyed Australians who had used a city train in the last 6 months. You can view the survey results for city trains here.49% of survey respondents told us they often witness ‘antisocial behaviour’ on the train. Some of their comments about why they didn’t like riding the train included:

“The negative is some of the people who use it!”

“Smokers at train station platform. People with feet all over the seats.”

“Rules for quiet carriages are quite often ignored.” 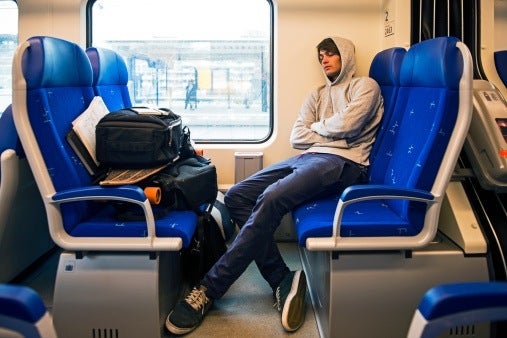 A recent survey of Canstar Blue staff showed that our staff members’ biggest bugbears on the train are:

Is it cheaper to catch public transport or drive?

Queensland Rail said passengers’ number one complaint in 2014 was about other passengers putting their feet, bags and other luggage on seats. General Manager Rebecca Masci listed the most bizarre passenger complaint reports from the Ipswich-Brisbane line last year: a man shaving his head, a man playing a ukulele, people playing football in the aisle, and even people typing too loudly in the Quiet Carriages.

Anecdotal experiments in Melbourne like this one and this one show that perhaps the way to get people to behave is to tell them what they need to do in a loud and assertive voice. “Please stand up so that this lady can take a seat.” “Please move down so that everyone can get on the train.”

But many of us are guilty of a courtesy faux pas without knowing. Read our list below to see if you’ve been offending your fellow passengers.

Keep your feet on the floor.

2.   Respect the disabled, elderly and pregnant: give up your seat 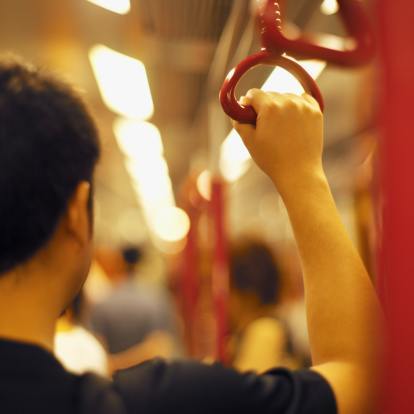 If you are occupying a Priority Seat, get up and offer your seat for anyone who has a disability or is elderly, pregnant or carrying young children. If you’re sitting or standing in a designated wheelchair space, or you have your bag, bicycle or pram in that space, you must get up and offer the space to a person in a wheelchair.

Take your rubbish off the train when you get off.

In the Quiet Carriages, don’t have loud conversations or talk on your mobile phone, and don’t listen to music or play loud games on your phone. In all other carriages, you should still keep noise to a minimum.

In 2014, 38% of Australians we surveyed said they don’t like it when other people in the train carriage have loud conversations. 35% disliked it when others played music on their headphones that everyone else can still hear. And 20% don’t appreciate it when passengers play noisy game apps on their phone. Brisbaneites told the Brisbane Times that “oversharers” who have long, personal conversations over the phone, are one of their biggest pet peeves.

As early as the 1800s, the rule for train etiquette was, “Do not talk aloud in a railway carriage, and thus prevent your fellow passengers from reading their book or newspaper.” You can read about it in Oliver Bell Dunce’s 1884 classic, Don’t: a manual of mistakes and improprieties more or less prevalent in conduct and speech, available free on Google Books. Yet so many people today consider that even in the designated Quiet Carriages, they can talk as loud as they want with their friends or on their phone.

Don’t eat food on the train. Any food, not just messy food. You can still drink water on the train, since it’s a basic human right.

6.   Let people step off before you step on

When you’re waiting to board your train, stand to one side, so that people on the train can get off first. The train is not going to leave without you.

When you’re in the train waiting to get off at your stop, let the people in front of you step off the train first. Don’t push your way forwards, as this is not safe.

7.   No running on the platform or in the carriage

When you’re on the train, pay attention to the stops as you get close to your destination, so that you can get out of your seat and to the door in plenty of time. If you realise you’re at your stop and you’re still in your seat, don’t run through the carriage pushing everyone out of your way. Respect other people’s safety.

During peak hour, most people get on and off the centre carriage, causing roadblocks. You should get on and off the front or back carriages. You can also get on at the centre carriage and walk through the train to a less busy carriage. When you’re standing halfway down the aisle and you see that more people are boarding the carriage, move further down the aisle so that people can get on easily and safely.

9.   Keep your bags and other luggage out of the way

10.   When you’re in an aisle seat, let people get in and out of the window seat

No bicycles on the train during peak hours. If you ride to the station, park and lock it at the station.

In 2014, 40% of Australians we surveyed said they don’t like it when other passengers ride the train when they’re coughing and sneezing all over everyone around them. 30% said they can’t stand passengers who don’t wear deodorant. We’re with you there! On the other hand, Metro Trains passengers in Melbourne said they also don’t like “skunkers” who stink up the whole carriage with their favourite perfume.

In 2014, 41% of Australians said aggressive co-passengers were their biggest pet peeve when riding the train. 23% of female respondents especially said they don’t like it when other passengers stand too close to them. Mitchell Toy created a set of diagrams for Melbourne commuters using Metro Trains to show where people should sit as more people boarded the train. Since 71% of Victorian train users in 2015 told us they often experience overcrowding on the train, knowing how to keep out of each other’s way is important stuff.