The purchase price is always a major consideration when it comes to buying a new laptop. But what about the ongoing running costs? It might not be something we often think about, but charging a laptop uses electricity, and electricity costs money – but how much exactly?

Canstar Blue seeks to answer that question in this guide. We look at some leading laptop models, break down how much electricity they require to charge, and explain what this adds to your electricity bill.

How much does it cost to charge my laptop?

Completely charging a laptop will cost around 1 to 3 cents in electricity usage, depending on the size of the specific laptop’s battery, as well as your electricity usage rate. Small laptops, such as notebooks, generally have a 30-50Wh battery capacity, costing 1 to 1.5 cents to charge. On the other hand, larger laptops with greater processing power requirements, or HD displays, often have batteries in excess of 70Wh, costing upward of 2 cents to fully charge.

The below table lists the battery capacity and associated charging costs of popular laptops if we assume an electricity usage rate of 28.7c/kWh.

The cost of charging your laptop

Assumes battery is charged from 0% to 100% once per day, 365 days a year.Bear in mind that a larger battery does not necessarily mean it will have longer battery life. For example, the Asus ROG laptop boasts a battery capacity double that of the Toshiba Chromebook 2. However, the Asus ROG is a gaming laptop which consumes considerably more power compared to a basic notebook. This means the Asus ROG may or may not have a longer battery life depending on how it’s used.Other things that affect laptop battery life:

What if I use my laptop while it’s charging? 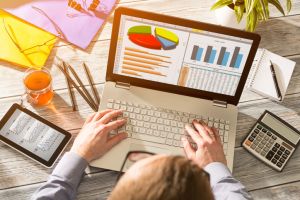 However, some of this charge is now being immediately used. This means it will cost you more in electricity and take longer to charge.To illustrate, let’s take a 40Wh laptop battery. This battery charges at 10 watts per hour, meaning it will then take four hours to completely charge the laptop. While using the laptop on charge, let’s assume you’re consuming 6Wh of the laptop’s power. That means the laptop is only really charging at a rate of 4Wh, and it will now take 10 hours to fully charge.

Laptops use much less electricity to charge than a desktop computer requires to run in virtually all scenarios. The majority of laptops on the market have battery capacities between 30Wh and 80Wh, providing hours of laptop use. As the table above shows, keeping a laptop charged daily comes at a cost of mere cents. But the costs do add up over a year.Desktop computers require a constant electricity feed to both the tower and at least one monitor.

A standard 24” monitor uses 275 watt-hours, at a cost of 7.9c per hour – that alone is more expensive than fully charging a laptop.It is more difficult to calculate the electricity usage of a PC tower, as you must consider the electricity usage of individual components (e.g. processors, video cards and cooling fans) which vary considerably across models. Electricity usage will also fluctuate with the stress the PC is put under. As a general rule, most desktop computers will have a minimum idle usage of 80Wh, costing around 2.3c per hour. When a PC is under strain, however, it consumes up to 300Wh at a cost of 8.6c per hour.

To summarise this, a desktop computer (including the monitor) will cost at least 10.2c per hour in electricity to operate. Meanwhile, a laptop will generally only cost 1 to 3 cents for several hours of use. Laptops might not be as powerful as desktops, but they’re undoubtedly less burdensome on the electricity bill.

Should you put solar panels on your investment property?