Gone are the days when it was mostly women staying at home and slaving over a hot oven to make dinner for hubby. In today’s world, some couples are lucky to even zap something in the microwave for three minutes. The flipside now is that although oven use isn’t as prolific as it once was, energy prices have shot up markedly over the last 20 years. So, running an oven on a per-cook basis can be more expensive than yesteryear, and those still using their oven may be wondering how on earth their latest bill got so high. In this report, Canstar Blue breaks down the energy costs of both electric and gas ovens, and will see which one comes out on top.

How much electricity does an electric oven use?

Electric ovens are known as ‘heavy-draw’ appliances, which means they use quite a lot of power. An average 600mm built-in oven has between a 2kW and 8kW capacity, and the costs can quickly add up if you’re not careful. A one-hour cooking time can cost up to and over $2 for more powerful ovens (on the basis of an electricity rate of 33c per kWh).

Of course, how much your oven costs to run depends on how efficient the model is, how much heat you use, and how often you cook. Given that a lot of meals take less than an hour to cook, you might find your electricity costs ‘not so bad’ after all. Apart from this, there are other pricing aspects you’ll need to consider to more accurately determine how much you’ll be paying to cook: 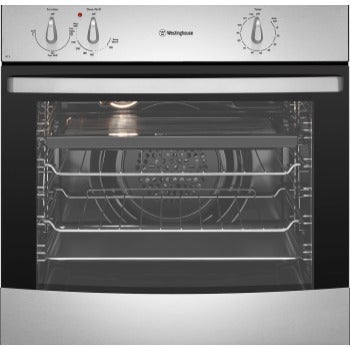 The type of ovens people are likely most familiar with are built-in units, about 600mm wide and around 60L in capacity. Take for example the Westinghouse WVE613S wall oven (pictured). With an output of 2.3kW, it’s at the lower end of the oven power spectrum, and if your per-kWh energy rate is 33c, then you can expect to spend up to about 76c for an hour of cooking. For five days a week over a year, this could cost nearly $200 to run! Now, not everyone uses their oven every weekday for a year, but your usage costs will be easy to figure out just by looking at how often you actually use your oven.

In the case of electric ovens, if you’re fitting a new one in your kitchen, then it’s important to assess your own usage and power needs because you might find you can get away with a more efficient oven!

How much energy does a gas oven use?

Given that an average gas oven uses around 12 megajoules (mJ) of gas an hour, you can expect to pay around 65c per hour of cooking. This is of course based on several factors, which are:

It can be a little tricky to determine, but once you’ve figured these factors out, you’ll come to realise that gas ovens can be a lot cheaper to run than an electric ovens. The calculations above are based on Origin Energy’s Queensland Residential ‘Origin Maximiser’ plan for Brisbane. You may be on a different tariff, or your supplier may charge for gas differently. Either way, it’s a good indicator on the ongoing costs of an electric oven vs a gas one.

Gas ovens obviously don’t use electricity, but their gas costs can still add up over time, but at a much lower rate on average than electricity. Gas ovens typically use similar amounts of energy as an electric oven, but the price of gas is generally much cheaper, resulting in cheaper ongoing costs.

In terms of ongoing costs, gas ovens work out to be cheaper as gas is generally much cheaper than electricity. For a 2.3kW electric oven, it typically costs about 76c to run an hour, versus a 12mJ gas oven that costs roughly 65c per hour to run. If you cook an hour a day for five weekdays, that’s 55c saving a week, or $28.60 a year. Is that enough to justify buying a gas oven?

This is where it gets tricky. Determining value without knowing several things is difficult. There are a few questions you’ll need to ask yourself:

Chances are, you aren’t cooking consistently for an hour a day for five days a week. This is where the value of a gas oven starts to diminish – unless you are cooking a lot, a gas oven may be all a load of hot air. Furthermore, your provider may provide negligible cost benefits for choosing gas over electric. In the example above, the 11c an hour difference really isn’t that significant.

While you’re researching electricity costs, why not take the opportunity to compare energy plans in your area. Follow the links below to compare the cheapest deals on our database for your state.

The debate of gas versus electric is all a moot point if you don’t have gas lines to your house. It’s best to contact your energy provider about the costs of this, as building the infrastructure can be quite an undertaking. In terms of large costs, you may also find that buying a gas oven when you have a perfectly fine electric one is a false economy. Take for example the Westinghouse electric model mentioned earlier, which is retailing for about $1,000. The same-capacity Westinghouse oven with gas retails for around $2,700. At the rate of saving 11c a day – on average – you’ll have to be cooking for a good while to see the costs start to even out!

Should I buy a gas or electric oven?

Overall, the costs of running gas ovens versus electric ovens are surprisingly similar, and gas ovens pose no serious cost benefit over electric models. While there is a cost difference, it is likely not large enough to warrant spending more on a gas oven for the sake of saving a few dollars here and there. Spending money to save money will likely take years of doing so to see any benefit.

While there does appear to be more potential for electric ovens to boast high power figures – leading to higher power bills – on average, electric ovens are pretty on par with their gas counterparts. At the end of the day, gas vs electric ovens fall largely on personal preferences, of which only you can determine.