The Solar Bonus Scheme was closed to new applicants in July 2012. Customers who installed solar beyond this date would instead only be eligible for an ‘interim feed-in tariff’ of 8c per kWh, or a retailer set feed-in tariff, usually between 6c and 10c per kWh. Despite this, the table below from the QPC report shows the number of residential solar installations in Queensland continues to grow, albeit at a declining rate since the closing of new solar bonus scheme applications. 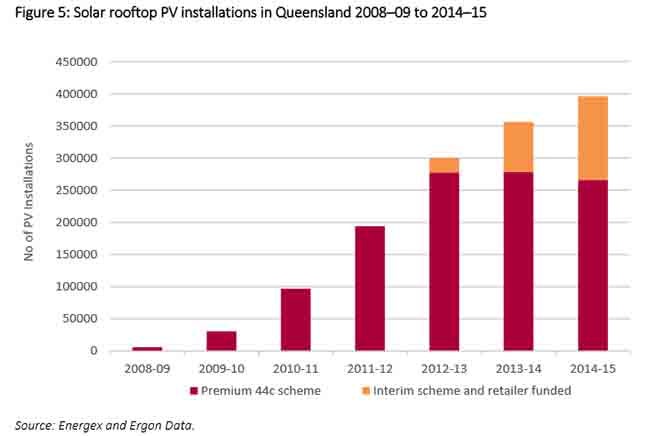 Approximately 275,000 households signed up to the solar scheme before the cut-off, and were promised their 44c/kWh feed-in tariff would be maintained until 2028 – an agreement the Queensland government has said it will uphold, despite the QPC report.

“Anybody who signed up for the Solar Bonus Scheme will continue to receive the feed-in-tariff and the current terms of their contract with their retailer will be honoured,” Energy Minister Mark Bailey told the Courier Mail.

Winners and losers in Queensland

The QPC’s report highlighted concerns with the affordability of continuing such a generous feed-in-tariff. These rebates are essentially paid for by the energy distributors Ergon and Energex, and are then credited to solar PV customers by their retailer. But this money has to come from somewhere, meaning higher network costs and greater supply charges for all customers – including those without solar. 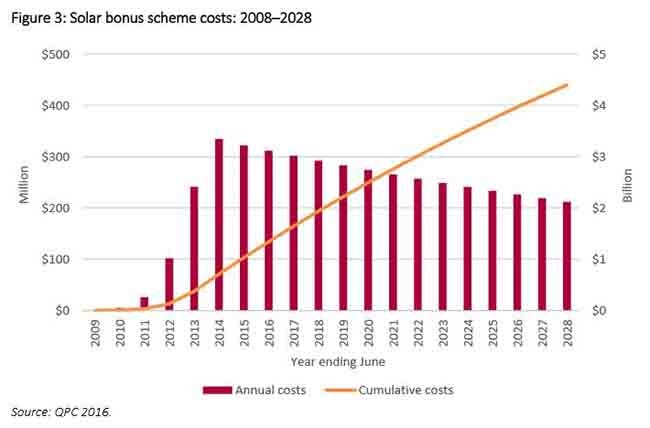 The QPC also suggested that households with solar storage should lose their eligibility for the Solar Bonus Scheme. This was strongly rejected for discouraging investment in solar technology.

In total, there were 52 recommendations made by the Productivity Commission, 43 of which were accepted. One of the accepted recommendations was for the Queensland government not to reintroduce any new premium feed-in-tariffs. That means new Queensland solar customers have unfortunately missed their chance to secure a massive feed-in tariff incentive.

While Queenslanders who signed up to the Solar Bonus Scheme will continue to receive their generous benefit until 2028, this is subject to increasingly stringent eligibility conditions.

To maintain the bonus, customers must:

A Solar Bonus Scheme recipient will also permanently lose their premium tariff if they:

For more details about ongoing eligibility for the solar bonus scheme, visit the Department of Energy and Water Supply Queensland.