New research from the University of Queensland shows that your child could benefit from playing music at a very young age.

It’s a well-known myth that listening to Mozart in the womb will make your baby smarter from birth. Now a new study has shown that playing music with your toddler could help them learn even more than reading a book with them. And since we know reading books with your kids from an early age can put them light years ahead of the others in their class, it looks like sharing music with them could be simply phenomenal.

This study asked parents of 3,000 children to talk about what shared musical activities they did when their child was two to three years old. Then, two years later, they measured the four or five year old children for a range of social, emotional and cognitive skills.

Skills that music will help your child develop

The study showed that playing music together at home improves learning ability and speed in many different areas:

Researcher and Head of the UQ School of Music, Professor Margaret Barrett, said: “The study highlights that informal music education in early childhood is a vital tool for supporting the cognitive and social development of children. We want to understand how Australian families use music so we can support them through policy and practice recommendations.”

Boppin’ Babies founder Vicky Abad, one of the UQ researchers, said shared music in the home is the basis of their successful early learning music program. It “helps parents and children grow together in healthy, happy ways, while also helping children developmentally both in the short and long term”.

The Boppin’ Babies program has music groups for children from newborn babies to four year old kindy kids. It has been running for eight years in childcare centres and community centres in Brisbane, Sydney, Canberra and Melbourne.

Why does music make your child smarter?

The brain pathways that are activated by listening to classical music in particular are similar to the pathways used for spatial reasoning. Spatial reasoning includes everything from doing jigsaw puzzles to certain types of mathematical problems. This can help your child learn faster in these pre-school skill areas.

Listening to music has also been proven to “soothe the savage beast” in terms of calming down patients who are angry, anxious, depressed, or having difficulty concentrating. So it makes sense that children who listen to music at home would be friendlier to the other kids in their kindergarten class.

As for learning to play a musical instrument, this can activate even more pathways and make us more efficient at all kinds of learning. Learning to read music involves maths to count and divide notes into fractions of a beat; literacy to read written instructions above and below the notes; and physical coordination, moving everything from toes to lips to posture to achieve the right sound.

All of these factors increase a child’s confidence – so it’s no wonder that children who learn to play an instrument are both smarter and more social.

A 2014 study by LA’s Northwestern University found that students living in lower socioeconomic gang-ridden neighbourhoods ended up graduating and studying at notable universities after learning an instrument for two years through The Harmony Project. As lead researcher Nina Kraus points out, “You’re not going to get physically fit just watching sports.”

In several studies reported by The Telegraph, children improved in their ability to do puzzles and other spatial tasks by as much as 30%, after they had taken piano lessons for just six months.

5 ways you can play music with your child 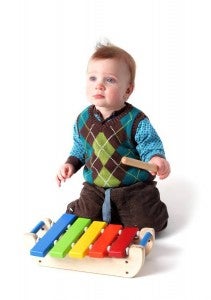 Dancing in the living room

Put on your child’s favourite CD and since along, dancing around the living room together. Dancing is great when your child is not yet up to singing, but already likes to listen to fun music. Dancing is also amazing exercise for both of you! You can check out how their movement and control are developing when they do moves like marching, jumping or hopping, and twirling.

Download the Baby Karaoke app from RaisingChildren.net.au (for Apple or Android tablets or phones) and have a sing-along to some classic nursery rhymes.

Toy keyboards or guitars are a bundle of fun for kids. Get out your video recorder or your phone – we guarantee some hilarious footage for their 18th or 21st.

If you’re a little short on cash – let’s face it, babies are expensive – you can make your own instruments by sealing some rice or sand inside a plastic bottle. Instant maracas! A lot of baby websites will tell you that pots and pans or even a pile of rocks can be great instruments, but if you suffer from migraines or tension headaches, a softer sound is a must.

Children can learn some stringed instruments from as young as pre-school age, but it’s usually best to wait until your child expresses an interest themselves before looking for a child’s class. A child-sized violin can be an expensive and short-lived investment, and most primary schools have a good music program where children can borrow the school’s instruments for the year.

Other instruments such as woodwind instruments are definitely best learned once your child gets halfway through primary school, because they require much better control over your tongue and lips than most pre-schoolers have.

Find a Boppin’ Babies class near you, or book Boppin’ Babies for your child’s next birthday party. These guys are experts at making music fun for kids – and they even make it fun for the adults to join in.

Make the car a musical machine

Whether you’re driving your child to the park, or swimming lessons, or kindy, why not put on some relaxing classical music, or another CD that you love? The drive will go faster for your child, and you won’t notice the traffic as much.

The Music Trust, an organisation that promotes music education in Australia, has awarded the inaugural Music Trust Award for Research into the Benefits of Music Education to the research team involved in this study.

The study, ‘Being and becoming musical: towards a cultural ecological model of early musical development’ was funded by the Australian Research Council and includes team members from the University of Queensland and the prestigious University College London.

Kids ask their parents to put down the mobile phone

Should children use tablet computers in school? 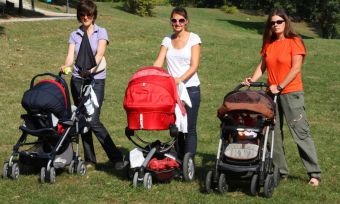