Call of Duty Black Ops: Cold War goes back to the roots of the Black Ops sub-series, following through the demands made by fans over the past four years. Beautiful, suspenseful and bringing modern flair to one of the series’ most beloved titles as a sequel, Cold War will satisfy both casual players and fans alike, albeit while not building on the Call of Duty formula much, writes Zachariah Kelly.

Call of Duty Black Ops: Cold War: Back to the 80s

Call of Duty has been on a roll recently. Last year’s Call of Duty Modern Warfare was a brilliant title, packed with a gripping campaign and a massive multiplayer mode, and this year’s release of Warzone, a free to play Battle Royale mode using assets from Modern Warfare, has proven to be a popular success, giving Call of Duty one of its most successful years.

And for the most part, Cold War continues the hot streak of the franchise. Call of Duty Black Ops: Cold War is a sequel to 2010’s Black Ops (despite three numerical sequels already existing), often revered as one of the best games in the franchise – It’s a lot to live up to.

Cold War gives the subseries a new lease on life with some beautiful graphics, a short but sweet campaign, a multiplayer mode for all skill levels, and the return of the much loved Zombies mode. While elements of the game are borderline tedious and generic, there’s still lots to appreciate in this run-and-gun reprisal of a much loved game. 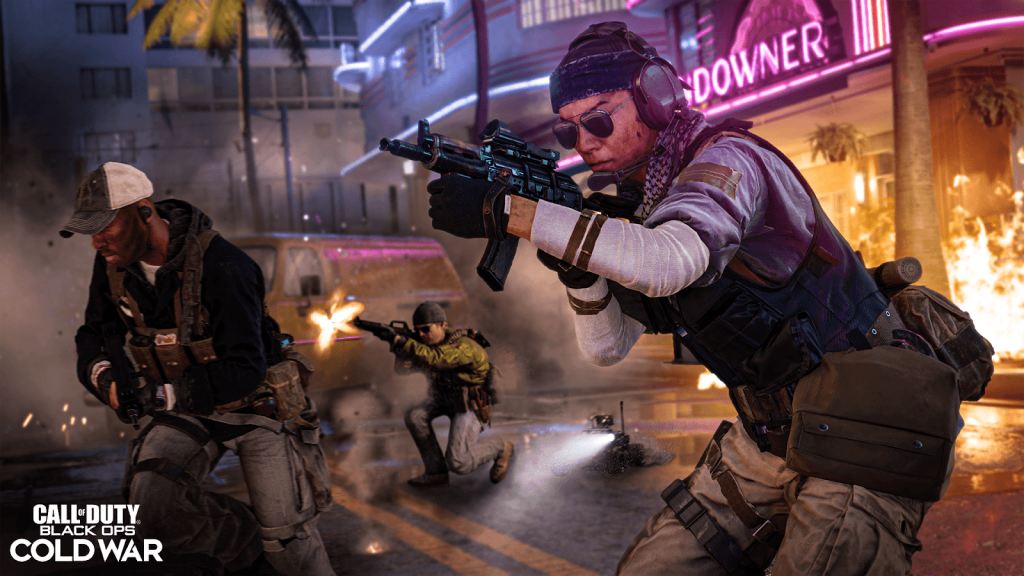 Looking for a place to pick up a slew of games? The Xbox store might be for you. Servicing Xbox consoles by letting you buy games through the client, and servicing PC gamers through the Game Pass, you’ll find there’s a lot to love in what’s on offer from Microsoft’s games service.

Along with a huge catalogue of titles, a Games Pass subscription includes access to new Microsoft studios games the very day they come out. You can pick up the new Call of Duty title through the store, and have it downloaded to your console in no time.

The campaign for Black Ops: Cold War brings back the gripping intensity of a covert thriller, continuing Call of Duty’s legacy of offering terrific campaigns. Being a sequel to Black Ops, the game features a lot of the familiar faces from the first game. The story feels more ‘Hollywood’ than the original game; packed with tropes, and a focus on being cinematic. That’s not a bad thing, but it’s just to say that the pace of the game is certainly out of step with the first title.

The campaign itself is also a lot shorter, and you could probably finish all of the available content within six hours. In those six hours you’ll be put into a variety of missions, playing as Alex Mason, the protagonist from the original game, and a player-created character. The action has been cranked up a notch since the original Black Ops, leaning more in on being a movie in some parts than being a game.

Everything considered, there’s enough twists and turns in the story to keep you interested for the full six hours, complete with side missions and your own choices determining the outcomes of situations. 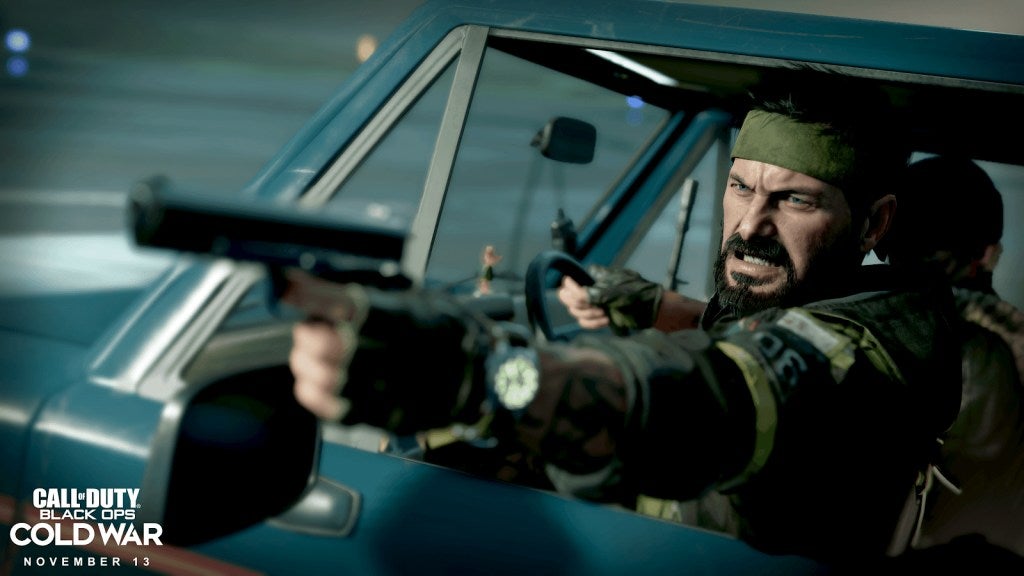 The multiplayer mode of this Call of Duty has more in common with previous installments such as the original Black Ops and 2009’s Modern Warfare 2 than the title from last year. It’s higher octane than the slower, more thought out multiplayer modes that the series has produced in recent years, bringing in eight new maps and tonnes of new weapons, along with three larger-scale “combined ops” maps.

The gameplay is tight, and has a more arcade-like feeling to it than the realism of the last game. This is definitely intentional, and makes the game feel like it’s doubling down on going back to the basics of the franchise, previously rejecting futurist settings after fan outrage. While a new run and gun Call of Duty is appreciated and casual enough to dump hours into, it’s somehow less daring than a new game should feel. Rather than be a new product building on its past, it’s banked on nostalgia, in both feel and premise.

Banking on nostalgia isn’t necessarily a bad thing – the game still plays mostly the same, even with the inclusion of a Skill Based Matchmaking system (which means you’ll always be facing opponents of a similar skill level, rather than simply new players and people well out of your league).

Progression has also taken an unfortunate turn for the worst in this title, as every weapon feels exactly the same to level, and for the most part, every gun feels similar. Weapon sounds are less powerful, and so you feel less powerful running around the map and fighting other players than in the previous game. These aren’t major flaws, but they might irritate a fan.

Love gaming? Get an NBN plan to match

Call of Duty is a massive game, taking up 125GB in full size on PC – on top of that, last year’s Call of Duty game often had updates as large as 40GB! This would take a while to install – so if you want to speed things up, and get the advantage over other gamers, you’ll want a fast NBN plan. Check out the table below for NBN plans ideal for gamers. 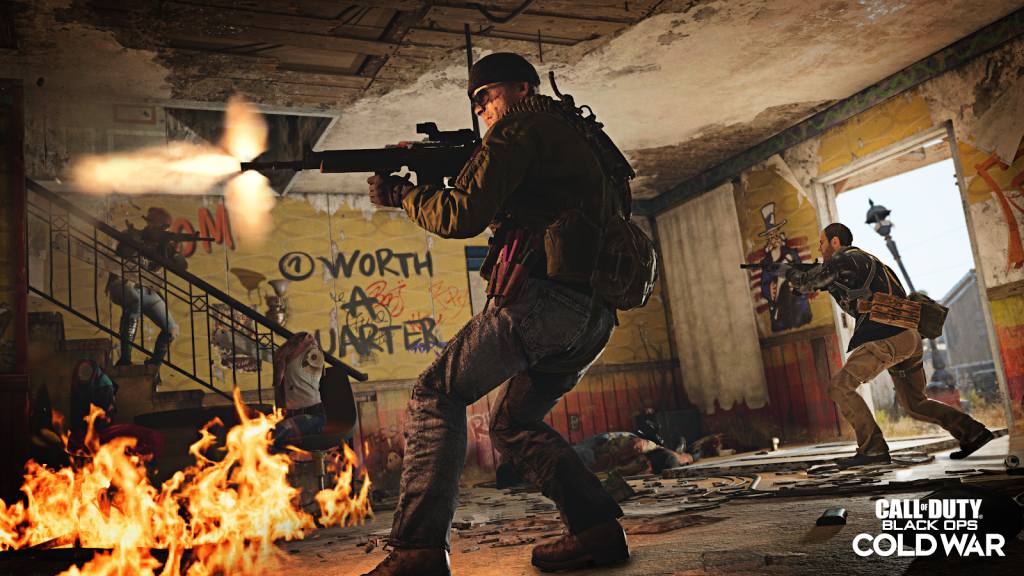 Zombies mode: It’s good to be back

Zombies is a beloved staple of the Black Ops series. It’s made an appearance in every Call of Duty since 2014 (except for last year’s Modern Warfare), but typically fans have loved it the most when developed by Treyarch, the lead developer studio of this game.

This time around, Zombies has refreshed itself again with a whole new universe, heavily using the foundations of the mode from the previous Black Ops games to create an all-round enjoyable experience. Compared to previous Zombies maps, “Die Maschine” (the new map) is super easy to pick up on, and is an enjoyable experience either solo or with other players. It uses weapons from the multiplayer mode for the most part, however the iconic Raygun is back, and wonder weapons have also made a return.

Is Call of Duty Black Ops: Cold War worth buying?

I recommend Call of Duty Black Ops: Cold War. Call of Duty is a staple of casual multiplayer gaming, and is worth picking up just to have it for casual couch play for when you have a spare hour or two, or if you’ve got mates over. As an annual franchise, Call of Duty is perfect for if you just want to play a casual game. Battle pass and update information is still yet to be fully revealed, however the game will be getting free updates in the form of maps and guns over time, much like Call of Duty: Modern Warfare from last year. A remix of the classic map “Nuketown” from the original Black Ops has just been released, as a taste of what’s to come.

You’ll love Call of Duty Black Ops: Cold War if you love first-person shooters, war games, action games and multiplayer games. The game is available on PS4, Xbox One, PS5, Xbox Series X|S and on PC through Battle.net. The game retails at a value starting at $79 for previous generation consoles, $98 on next generation consoles and $99.95 on PC.