Fall Guys: Ultimate Knockout – commonly known as just ‘Fall Guys’ – is a platformer battle royale taking the world by storm, amassing over seven million sales since its recent release in August 2020. With over 25 mini-games, this family-friendly game is a brilliantly made and aesthetically fresh take on the battle royale scene that you shouldn’t miss out on!

With Fall Guys currently only available on PS4 and PC, should other console gamers keep their eyes peeled for a release? Find out how Fall Guys stacks up in the gaming scene, and what you can expect if it makes its way to a console near you in this Canstar Blue guide.

What is Fall Guys and mini-games explained

Fall Guys: Ultimate Knockout is a battle-royale game with a twist – instead of competing in one game like most battle-royale games such as Fortnite, PUBG and Call of Duty: Warzone – gamers will compete over multiple mini-games until a winner is crowned. 60 players enter until one is left standing, with each round featuring a different type of mini-game to knock out players and keep the stakes high.

Mini-games are split into multiple categories, each of which require a different strategy to survive and succeed in. Below are all of the current mini-games available on Fall Guys: 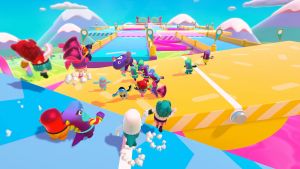 To get a bit more of an idea of just what you’d be getting yourself into, check out IGN’s ranking of Fall Guys mini-games in the video below. 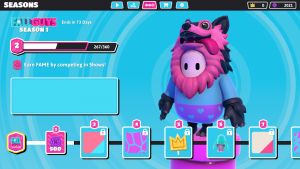 As with most battle royale games nowadays, you can purchase Season Passes to help you earn collectables and customisation skins, as well as help you progress through your character rankings. Of course, if you’re looking to grind your way through the old-school way, you can certainly test your mettle against other players, earning your skins through wins and games.

Fall Guys uses two types of currency in the game – Kudos and Dubs. Kudos are earnt by playing matches, with the further you progress earning you more Kudos, while Dubs are awarded for being the last one standing. Kudos can also be acquired through in-game purchases, and can be spent alongside Dubs on outfit customisations, allowing you to stand out amongst the chaos.

The first Season Pass released by Fall Guys featured 40 tiers of rewards for players to jump headfirst into, with Season Two soon approaching quickly, and promising even more customisation for players to choose from, with the second instalment also promising more mini-games for you to enjoy.

Is Fall Guys worth playing? 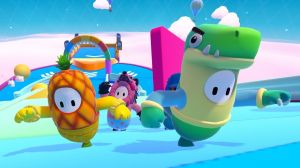 Fall Guys: Ultimate Knockout is dominating the already congested battle royale genre, as its colourful palette combining with its easy-yet-fun gameplay to allow anyone to hop on and have a blast, regardless if you’re a gaming veteran or new to video games. With an easy-to-navigate layout, Fall Guys: Ultimate Knockout is a refreshing battle royale experience that has everyone’s attention.