As was the case with Marvel’s Spider-Man, Sony has partnered with Marvel Games once more to bring Iron Man VR exclusively to PlayStation VR. Built from the ground-up as a wholly original Iron Man adventure filled with iconic characters and familiar locations, the game has been eagerly anticipated by VR fans since it was first announced almost two years ago, writes Krishan Sharma.

The good news is that Iron Man VR successfully captures what it would feel like to step inside the suit of one of the most famous superheroes on the planet. From feeling the freedom of flight as you soar through the sky to the frantic ranged battles and witty retorts, this is a game that will make you truly feel like Iron Man in a way that only VR can. Perhaps the game’s biggest achievement is how it cleverly overcomes the limitations of the PSVR hardware to deliver 360-degree movement, allowing players to twist and turn unlike other PSVR titles.

The game has its issues, particularly in the visuals department, but overall, this is a flight worth taking for PSVR owners.

What’s it all about?

Iron Man VR is one of the few titles on PSVR that require two Move controllers to play. Positioning the controllers by your waist and grasping the triggers with your palms facing down will see you activate Iron Man’s thrusters and take off into the sky, angling each of them in order to change direction as you fly. Turning requires you to either physically move your body in the desired direction or by pressing the face buttons on either of the Move controllers. The former feels more natural and responsive but it does mean you will tangle yourself up in the PSVR’s cable though the game does a decent job of letting you know when you have and pauses the game so you can untangle yourself. However, landings can feel imprecise as there are no analogue sticks on the Move controllers to fall back on for making finer adjustments to movement.

Combat involves sticking your hand out and aiming your palms towards the enemies in front of you while pressing the action button which fires Iron Man’s repulsors. Angling your palm down launches auxiliary weapons such as homing missiles from Iron Man’s wrists. You will need to weave out of the way of enemy fire while also alternating between your primary and auxiliary shooter regularly. As such mastering the art of flying with one hand and shooting with the other, while moving, is key.

What’s impressive is that even if you turn your body almost completely the other way from the PlayStation camera and aim at enemies with your repulsor blasts, you won’t see your controllers go haywire like you would in other PSVR experiences. Iron Man’s arm might not accurately extend like it would if you were facing the camera but it still records the direction of your shots. Pulling off 360-degree movement and combat on what is ostensibly a 180-degree tracking VR headset is no small feat but developers Camouflaj have pulled it off through some smart software tricks with Iron Man VR.

Iron Man’s other abilities such as hovering, rocket punch and the iconic unibeam involves using the tiny face buttons which isn’t ideal. Even towards the end of the game, I would find myself accidentally activating a quick turn (as it is also assigned to one of the four face buttons) when I wanted to hover so I could line up shots more easily, leading to some frustrating moments in the heat of battle. Also as great as Iron Man VR controls, the fact that the triggers activate your jets and the Move’s action button fires weapons, is something I struggled to get used to. After years of playing PSVR titles, my brain is hard-wired to think of the Move’s trigger as the default ‘shoot’ button, not navigation.

Hopefully, the developers update the game to allow players to remap the controls within the options menu. 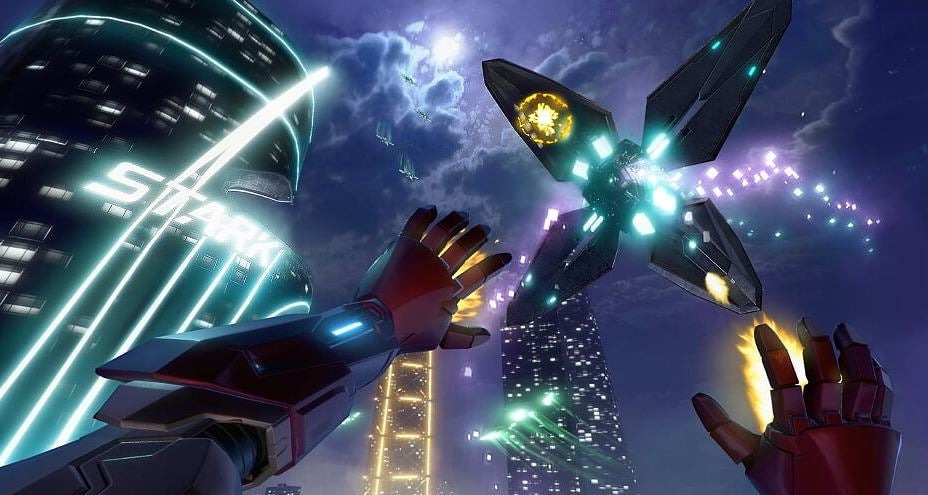 Iron Man VR is structured like a linear action game with Tony Stark’s Malibu mansion acting as a hub where you’re free to explore or pick missions to play.  Like any good VR game, there’s a fair amount of interactivity in the environment whether it be lifting weights in Tony’s home gym, listening to the radio, making yourself a cup of coffee in the kitchen or playing a round of basketball.

Stepping into the garage allows you to tinker and customise the Iron Man suit and upgrade your loadout before embarking on a mission. This is a great addition as you can really tune various aspects of the armour to suit your playstyle whether it be tweaking the way it uses ammo or how quickly your armor regenerates to crafting additional weapons. It also incentivises you to play through the optional combat and flight training missions which upon completion nets you research points that can be used to upgrade your gear.

The story is entertaining and well-paced and the voice cast do a great job of convincingly portraying the likes of Nick Fury, Pepper Potts along with villains Ghost and Living Laser throughout the eight-hour campaign. Tony Stark’s one-liners in particular are always on point.

Sadly the graphics while serviceable are underwhelming with character models looking a bit rough and textures on the blurry side. There’s also no cinematic cutscenes with the beginning of each chapter told entirely through voice over and a blank screen. Load times are also frequent and lengthy. The developers Camouflaj are a small independent studio and it’s clear that they did the best they could with the limited budget they had but it’s just a shame that the publisher, Sony, didn’t allocate more resources to ramp up the overall presentation of the game.

While it lacks the production value of a AAA-quality console title, Iron Man VR crucially captures the exhilarating feeling of becoming one of the world’s most iconic superheroes. There’s definitely a learning curve to the controls but once it all clicks, it is a deeply satisfying and rewarding experience that shouldn’t be missed by PSVR owners.