Step into the most authentic NFL gaming experience yet with the next-gen version of Madden 21, which includes updated graphics and additional features to give players the most realistic controls and visuals from the franchise so far. Available to play on the Xbox Series X and PlayStation 5, next-gen Madden 21 provides gamers with real NFL athlete data to deliver the most authentic, fluid and dynamic experience in franchise history.

If you’re thinking about getting a copy, but aren’t sure if you should roll with the current generation of hardware or treat yourself to the next-gen version, read on to find out what features come with the latest version of the game in this Canstar Blue guide. 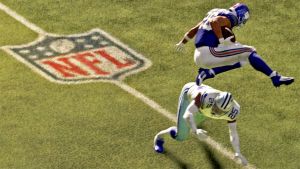 Play Madden like never before with a brand-new dynamic and versatile gameplay system, offering users massive improvements surrounding quarterback movement, the run game, tackling, and more. With access to the real-life Next-Gen Stats from the NFL, Next-Gen Madden 21 is able to analyse and use this data from both the offensive and defensive side of the game to provide more realistic and accurate gameplay.

Next-Gen NFL data has been effectively used throughout Madden to transform individual player patterns, with thousands of animations captured to re-create NFL athletes’ movements, like running, cutting, tackling, tendencies and other skills to make every player feel unique to gamers. 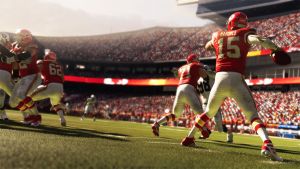 Next-Gen Powered Replays is a new feature, providing gamers with stunning instant cinematic replays of big-time plays made on previous downs, giving you extra bragging rights for tough catches or unstoppable sacks. Thanks to the powerful next-gen consoles, Madden is now able to imitate the real-time positional RFID (radio-frequency identification) data collection system, which is the same algorithm used by the NFL, allowing you to evaluate Next-Gen Stats data in-game to get the most out of your players.

Once the data has been collected, it’s translated to these dynamic replays, highlighting the big-time plays made by some of the best players in the NFL including Julio Jones, Aaron Donald, Pat Mahomes and more. Stats collected including ball carrier speed, rushing distance, broken tackles, yards after contact and many more, making it a dream for those big on statistics and analytics, while giving the game and extra element to it.

Next-Gen Play Calling has also transformed the way gamers control Madden, with the new ‘By-Player’ play calling system offering users the opportunity to access the most effective plays for the appropriate players in every situation. This feature also gives long-time fans what they’ve been craving, and ultimately more control over their players and team to make them run the offence you want.

Is NFL Madden 21 Next-Gen worth it? 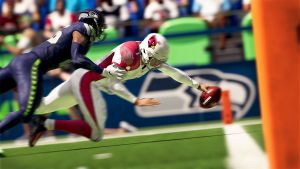 There hasn’t been a lot of hype surrounding Madden in recent years, with EA Sports taking heat from the Madden community, YouTubers and even NFL athletes for the poor efforts put into making the game fun and exciting every year.

Next-Gen Madden 21 provides a much-needed spark for the franchise, with a fully reconstructed play-calling system, gameplay and more providing users with the most authentic, fluid and dynamic NFL experience ever seen.

Next-Gen Madden 21 is out now at all participating stores and available to play on both the Xbox Series X and PlayStation 5, and may be well-worth picking up if you’ve got a next-gen console, or if you’ve been looking to jump back into the Madden series.