It’s the end of an era for some phone gamers. With some big Apple and Android phones coming out soon – and with updates just around the corner – the developers behind Pokémon Go have confirmed that the game will not be continuing support for older devices.

This means if you have a no-longer-supported smartphone, and you’re a Pokémon Go player, you won’t be able to get any of the new updates – including whatever new Pokémon or features are introduced. In fact, these older phones will no longer be able to launch the game at all – even if you update your operating system.

The next major Pokémon Go update will be happening sometime in October 2020. So if you’re an avid Pokémon Go fan, and you’re still using one of the devices listed below, you should consider upgrading to a new smartphone sooner rather than later.

What phones will Pokémon Go stop working on?

The developers of Pokémon Go have listed which iOS devices specifically will not be getting continuing support, along with what Android OS and iOS versions will no longer be getting updates.

The following phones will no longer be getting Pokémon Go support:

According to the developers, devices not included in the small list above will not be affected, but you can expect further phones to become unsupported as time goes on. Phasing devices out of development time is something that happens across all major apps, so this isn’t necessarily a surprise – and frankly if you’re still using the seven-year-old iPhone 5S in 2020, you’re well overdue for a phone upgrade.

Worried about your mobile data when playing Pokémon Go? Even if you’re a hardcore Pokeon trainer, you shouldn’t fret much, as the app itself will only use between 2MB and 8MB of data in an hour. That being said, other programs – such as location services, music and social media – will absolutely chew through your data, so it’s definitely worth picking up a plan that includes at least 2GB per month, depending on how much you play. You can check out a list of prepaid and postpaid plans in the table below.

What phone should I get for phone gaming? 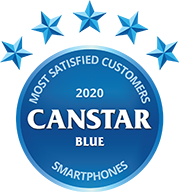 It’s difficult to pin down the perfect phone for anybody. There’s a lot of boxes to tick – affordability, storage, performance, cameras and phones on plans, however we’ve got some tools to make it easier for you. You can check out our comparison tool if you’d like to compare phone plans from a wide range of telcos, including Telstra, Optus, Vodafone and more.

Beyond this there’s some great resources you can check out when buying a phone. If you’re looking for the best-loved phone brand of 2020, Canstar Blue’s most recent ratings saw OPPO win the Most Satisfied Customers award for smartphones. Respondents to our survey rated OPPO highest overall for customer satisfaction, and the manufacturer received perfect five star scores for value for money, camera quality, battery life, durability, usability, speed and appearance – meaning OPPO is definitely worth checking out if you’re after a new phone.

If you’re a big fan of Android phones, we’ve put together a list of all the best Android phones available in Australia right now. If you skew to the Apple side of things, check out our page on the iPhone 11, the iPhone SE, or watch this space for the upcoming release of the iPhone 12.