Pokémon Sword and Pokémon Shield offers fans a visually dynamic and adventurous take on the widely-celebrated gaming series with it finally introducing the mainline Pokémon games onto the Nintendo Switch as Sword and Shield provides Pokémon fans across the world with an engaging and new experience. With the addition of new character customisation, new evolutions and the creation of the super-size Pokémon feature ‘Gigantamax’, it seems as if Nintendo and Game Freak have taken the steps necessary to form one of the best Pokémon series in the past decade, writes Tom Doyle.

Pokémon Sword and Pokémon Shield marks the 8th generation of Pokémon critters and gaming, as Pokémon has continued with a successful duo-game format which provides Nintendo lovers with two slightly different renditions from the new release. Watch below for the Pokémon Sword and Shield trailer.

Sword and Shield will boast over 1000 total Pokémon (including different evolutions) in the series, with dozens of more Pokémon being introduced as you go on a journey to catch ‘em all throughout the Galar region. Choose your new trainer and partner Pokémon from Grookey, Scorbunny or Sobble as you adventure throughout the Galar region taking on rival gym leaders and growing your Pokémon collection with both fan-favourites and newly created species. New Pokémon include Corviknight, a Flying/Steel type Pokémon that can be used as a flying taxi to easily get to spots around the Galar region.

There was initial confusion on some of the Pokémon returning from the latter series, as Nintendo clarified that older Pokémon such as Farfetch’d and Zigzagoon are capable of new evolutions while other popular and classic Pokémon including Ponyta and Weezing have unique Galarian forms with new abilities. The legendary new Pokémon gracing the forefront of Pokémon Sword and Pokémon Shield are Zacian and Zamazenta respectfully, as staying true to their original concept these Pokémon are elusive and not attainable till more advanced progression is completed through the game. 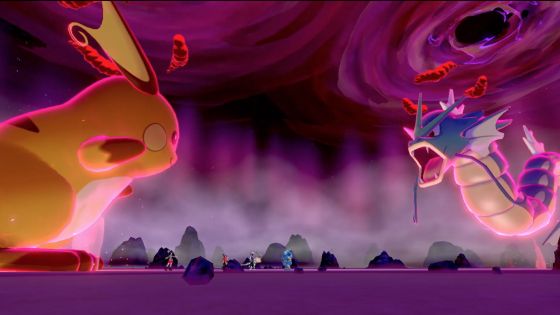 The Galar Region and Dynamax

The new Galar region in which your character explores is a spectacle that both newcomers and seasoned players will be astonished by, as with its dynamic weather conditions, open-scale map and Pokémon freely roaming around, locations such as the Wild Area and new gyms and cities provide gamers with a fresh perspective on the Pokémon series. The Wild Area is a sprawling open world situated in the middle of the map, as you’re able to catch Pokémon of varying levels and types while you meet other players along the way. The Galar region draws inspiration from British culture with landmarks similar to Big Ben and Pokémon resembling tea pots giving the game a warm United Kingdom welcome. Watch below to see the Galar Region in Pokemon Sword and Shield Switch trailer.

The Wild Area also hosts the ‘Dynamax Raids’, a new and already popular feature in the Pokémon Sword and Shield series that places you alongside three other Pokémon trainers either online or AI as you try to battle and catch new mighty and powerful Dynamaxed Pokémon. Dynamaxing is an ability that can be utilised either in the Wild Area or when versing a Gym leader, as it increases your Pokémon’s size and gives it stronger moves. Be careful to not waste your Dynamax though as it can alter the sway of a battle and can only be used once per encounter. Gigantamaxing is also a new feature in the Pokémon series, as this is a rare version of Dynamaxing which also additionally changes their form and can only be achievable for certain Pokémon.

With the bar for quality Pokémon content being dragged quite low with the recent Let’s Go! Series on Nintendo 3DS and Switch, it is obvious in the fruits of the labour that Game Freak have devoted years in refining ‘Pokémon Sword’ and ‘Pokémon Shield’ to be the most explorative and diverse Pokémon series to date.