Get ready to don your gloves as the highly anticipated release of EA Sport’s UFC 4 is set to drop on PS4 and Xbox One on August 14. With UFC 4 featuring innovative and immersive fighting environments coupled with an all-new career mode, take your fighter from the backyard to the bright lights of the octagon as you rise up the ranks to become a UFC Champion.

With a roster that’s boasting a number of top-ranking newcomers – as well as more than a few fan favourites – find out what to expect with the latest installment of one of the most popular fighting sports around. 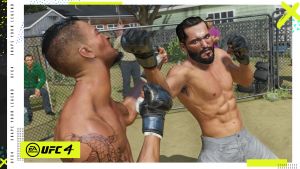 UFC 4 introduces revamped gameplay mechanics with several new features added to ensure gamers are provided with the most fluid and immersive gameplay possible. With the introduction of Real Player Motion Technology, experience more realistic gameplay with fluid clinch control movements, an overhaul in takedown mechanics and a simplified submission system. Ground and pound scenarios have also been improved, with the striker gaining access to a variety of new attacking tools and the defender finally being able to utilise counter transitions and head movement – meaning hopefully no more quick TKO’s!

UFC 4’s Career mode truly looks exciting, as it seems like EA Sports have put a lot of thought into creating an authentic player experience that showcases the highs and lows of being a professional fighter. There are a number of improvements coming to Career mode, as an evolution feature will be in place to provide gamers with an opportunity to shape their fighter’s skillset based on their preferred fighting style and habits, making no fighter the same. Relationship Building will also be a new feature in Career mode, which will enable you to use both friends and foes for learning new moves, skills and more as you look to rise up the ranks. 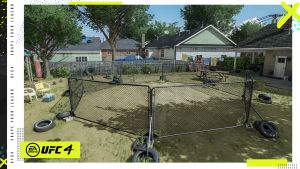 Battle it out in four brand new environments including The Backyard, The Kumite, Action Avenue and the dynamic UFC Apex centre located in Las Vegas. Blitz Battles is an all new feature coming to UFC 4, as this mode is all about rapid fire action against fighters online in a round-based tournament. With the rules constantly rotated to keep the gameplay fresh.

EA Sports takes a more personable approach to this entry in the UFC series, as your chosen weight, reach and other physical attributes will form the identity for your online fighter. Choose from multiple MMA disciplines including Jiu-Jitsu and Muay-Thai, as well as other fighting styles such as boxing and wrestling as you make your fighter one-of-a-kind. With over 1,600 new attire items and MMA gear available, coupled with 120+ varying in-game emotes, EA Sports lets you show both your personality and skills in the Octagon.

With new environments, improved gameplay, new online modes and a more in-depth Career journey, UFC 4 is ticking all the right boxes in becoming one of the best new sporting games of 2020. And with the real-life UFC currently operating at a smaller capacity, UFC 4 may help you get your fill of everything MMA.