In a total surprise, games developer/distributor Valve has announced a new gaming console, the Steam Deck, that looks and operates a lot like a Nintendo Switch. The Steam Deck runs games from online platform Steam, and is intended to be a portable gaming solution for PC gamers. Of course, it might not run as seamlessly as a high-end gaming PC, but it’s not intended to be a device for hardcore gamers: rather a device for gaming on the go, on the TV, or otherwise away from the PC.

The Steam Deck is slated for a December release date in the US and the UK, however other regions will need to wait until next year. Aussies might have to either buy the Steam Deck through the US or the UK, or simply wait for an Australian release date. 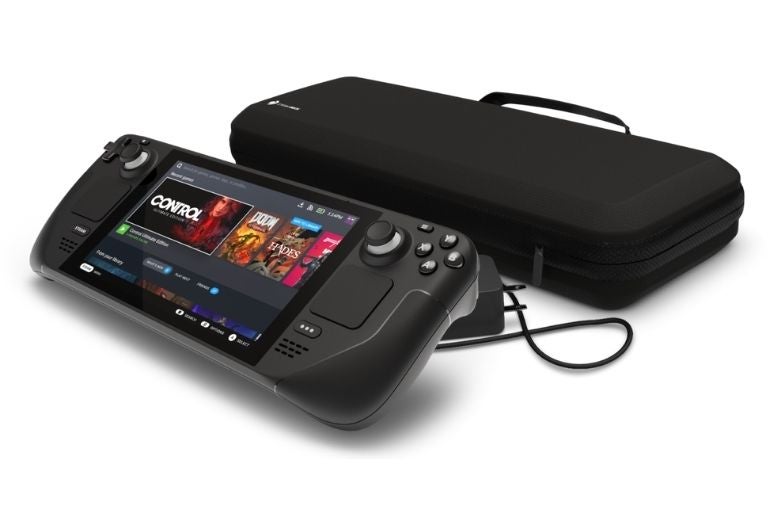 What is the Steam Deck?

The Steam Deck is a portable gaming console being developed by Valve, the developer, publisher and gaming giant behind Steam, DOTA2, Counter-Strike and Portal. Physically it looks a lot like a Nintendo Switch, and operates like a Nintendo Switch as well, although it’s a lot chunkier. It also has quite a large draw card on other consoles – it runs any game from the Steam store that you’ve purchased.

That’s quite massive, meaning you can play big title games like Marvel’s Avengers, Control and Death Stranding in the palm of your hand. You can have these games installed locally onto the Steam Deck, or stream them from your PC to your Steam Deck. Performance would likely be an issue for some games, in particular VR games, but the fact that these games can run at all is quite huge.

The Steam Deck can run portably, on its own screen, or connected to a display, like a TV or a monitor. It can also use a wide range of inputs, such as Xbox or PlayStation controllers through Bluetooth or mouse and keyboard inputs.

The Steam Deck comes in three models, divided by storage capacity: 64GB eMMC, 256GB SSD and 512GB SSD. All of these devices include a 7-inch display, a 60Hz refresh rate, and an AMD Zen 2 APU, developed in a collaboration between AMD and Valve. All models include 16GB DDR5 RAM and a microSD card slot for expanding memory. Bluetooth 5.0 is also inbuilt, with a headphone jack on the side. The console also has two USB A 2.0 ports and one USB A 3.1 port, a DisplayPort and a HDMI port.

The Steam Deck uses a 45W USB C connector to charge, and includes a 40Whr battery, that provides between two and eight hours of gameplay. That’s a generously large prediction period, and definitely varies depending on the style of game you’re playing and how intensely it would soak up battery life. In an interview with IGN, Valve said Portal 2 could be played for four hours on the Steam Deck, but if you set it to 30FPS, you could play for five to six hours. That’s a nice amount of time, but Portal is quite an old game – it’d be interesting to see how the device handles newer titles.

Should I get the Steam Deck or another console?

Considering the Steam Deck isn’t due for release until December in the UK or the US (or 2022 for unannounced other countries), you’ve got a fair amount of time to make up your mind, but as of right now, the Steam Deck is a complicated sale.

If you’re after a machine that’ll run anything from Steam’s massive library of games, this console might be for you – whether you’re after desk gaming or a couch gaming experience. It seems like a cheap way to get into PC gaming without necessarily shelling out for a PC, but we’ll wait to see whether performance matches that assessment. For existing PC gamers, it’s awfully convenient to have access to your whole Steam library when you’re away from the PC, such as if you’re in bed or on the couch, with a store that’s linked between devices.

Previously, gamers would often have a PC for desk gaming and a console for TV gaming, with separate stores servicing both, but that doesn’t need to be the case now. That being said, it looks like the Steam Deck will only run Steam games, so don’t expect games from the Epic Store or from Battle.net to run on this device. Also, expect to not be able to use Discord on this thing, for the same reason.

The price points of the Steam Deck seem a bit inconvenient too. $537 isn’t exactly cheap for a console at the moment (with the Nintendo Switch commonly costing $379, and the Xbox Series S costing $499), so that seems like the wrong reason to pick one up. That said, again, we don’t know the exact Australian pricing.

If you’re after a good deal to get into gaming with, it’s hard to look past the value of the Xbox Series S. For $499 you get next-gen gaming performance on a device that’s digital only. The Series S is the downgraded version of the Series X, which has better performance, but it’s a lot more affordable. Also, the price isn’t everything – for $10.95 per month (or $15.95 for the ultimate plan) you get access to Xbox Game Pass, a service best described as the ‘Netflix of Games’.

Xbox Game Pass lets you download hundreds of games with that monthly cost, such as Halo: The Masterchief Collection, The Elder Scrolls: Skyrim and DOOM: Eternal. It’s even available on PC. You can check out the Xbox Game Pass below, and get your first month for only $1.

If you’re shopping around for anything gaming-related, don’t discount the need for a solid gaming internet plan. You’ll want a plan that updates games quickly, doesn’t lag in multiplayer games, and can be relied on when you need it. A good place to start is with NBN 50 plans, but have a browse through some of the plans below.