There’s some good news for Marvel or Star Wars fans in Victoria who were left disappointed by missing out on ‘A Whole New World‘ of Disney+ ooshies, with the Woolies promotion finally being rolled out across the state from Wednesday (September 16).

For the next six weeks (or until stocks last), Victorians can join the rest of Australia and get their hands on any of the 36 plastic miniature collectables with every $30 spent in a single transaction in-store or online.

Woolworths Chief Marketing Officer, Andrew Hicks, said the supermarket initially delayed the launch to Victoria due to the Stage 4 Lockdown.

“We know many of our customers in Victoria have been waiting patiently for the arrival of Woolworths’ Disney+ ooshies and we’re thrilled to introduce them across the state from this Wednesday,” he said.

“Victorians have had an incredibly challenging year and we hope this collection helps bring some well deserved excitement and magic to their shop.

“I also want to thank our Victorian customers for their patience and understanding with the delay. The safety of our customers and team members is our number one priority through COVID-19. The delay in launching Disney+ ooshies in the state allowed us to keep our focus on customer safety as the community adjusted to lockdown. We now believe we are in a better position to continue to prioritise keeping customers and team safe, while also launching the campaign.” 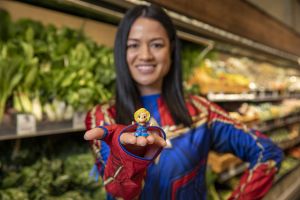 The Disney promotion has been hugely popular, with a number of stores having reportedly sold out of the small collectables already. A recent survey conducted by Canstar Blue found that two in five Aussies (40%) plan to collect the Disney+ collectables, with almost a third of families taking part (31%) expected to spend more on groceries than normal during the promotion.

However, there are also a number of shoppers choosing to ‘use the force’ of social media to vent their frustration over not getting enough collectables with their purchases. 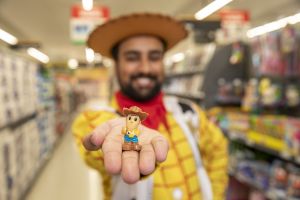 Meanwhile, other users are urging shoppers to avoid making Woolies’ ooshies a ‘Part of Your World‘ due to their potentially harmful impact on the environment.

Although the retailer quickly defended the promotion, stating the tiny toys can be reused at home in a variety of ways or easily recycled.

“Ooshies can be used in many ways – from storytelling, take care of them as a treasured collector’s item or popping them on the back of pencils. You can also bring them back to your local store to be recycled through Terracycle during the promotional period,” the company wrote in response to one Facebook complaint.