Kellogg’s is going ‘cereal-sly’ nuts with its latest creation, this time dipping its fingers into Bega’s recipe book to produce peanut butter flavoured Nutri-Grain. But hungry Aussies better scoop up a box quick, because it’s exclusive to Woolworths for a limited time only.

Breakfast hero Kellogg’s said its collaboration with Bega will offer the best of both worlds − the malty taste of its popular cereal range mixed with a classic nutty toast spread and crunchy peanut bits. Kellogg’s Nutri-Grain Peanut Butter Crunch costs $6.95. 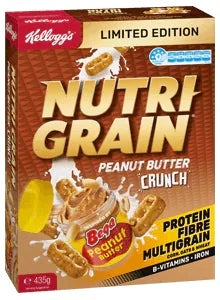 “Nutri-Grain is one of Australia’s favourite breakfast cereals, and we’ve brought together the malty-crunch Aussies know and love and combined it with the Bega peanut butter flavour and crunchy peanut pieces to bring Aussies something new, that up until now they could have only ever dreamt about”, Kellogg’s Head of Breakfast Products, Dan Bitti, said.

Marketing Manager of Spreads at Bega, Jacqui Roth, also said: “We’re thrilled to be teaming up with Nutri-Grain. We can’t think of a butter brand to partner with as Bega peanut butter makes its debut in the cereal aisle.”

The brand also previously teamed up with OAK to serve up a cereal version of the popular vanilla malt flavoured milk.