Vegans and vegetarians rejoice! You won’t have to skip out on the Christmas spread this year because Woolworths just launched a new plant-based Christmas range, including a soy protein roast and a cult favourite vegan chocolate mud cake.

There’s also the Woolworths Plantitude Vegan Chocolate Hazelnut Mud Cake − a cult favourite among vegans, weighing in at a whopping 1k, as well as Plantitude Petite Meringue Nests which come in a nine-pack. 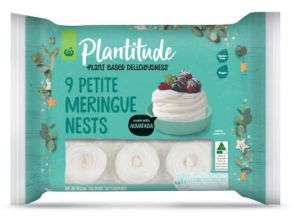 Woolworths also just released its range of Woolworths ‘Free From’ Christmas treats catering to those with food allergies and intolerances. The range includes puddings and fruit mince pies and all products can be found in the bakery section in stores.

Managing Director of Woolworths Food Company, Guy Brent, said: “Christmas is all about bringing together family and friends while sharing quality fresh food, but with that comes a range of dietary restrictions or preferences.

“This Christmas, we’re pleased to offer a variety of plant-based products in our Woolworths Plantitude range and Woolworths ‘Free From’ bakery line, ensuring no one has to be left out at the Christmas table.”