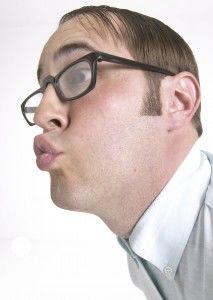 If you’re planning on puckering up with someone special this International Kissing Day… you might need to take a deep breath and hold your nose.

Our survey shows that mouthwash is only considered the most essential bathroom item by 1% of Australians.

Canstar Blue surveyed more than 2,500 Aussies on their bathroom and grooming habits, including everything from how often people shower or bathe, to how much money they spend on a range of everyday essentials like bodywash, deodorant and razors, and who exactly they are trying to impress.

And some of the results may shock you.

With the approach of International Kissing Day 2014 on Sunday, July 6, the results suggest that minty fresh breath is not exactly of the utmost importance to most Aussies, with less than a third of survey respondents saying they couldn’t do without toothpaste, while another 1% couldn’t manage without dental floss.

And for whom do we spend so much time, effort and money trying to look good? Well, it turns out it’s for ourselves. That’s right, 85% of respondents said their main motivation was “to look after myself” compared to just 11% who were trying to impress their partner or a potential partner (6%). In fact, looking good for work (13%) is apparently more important than impressing a love interest. Lucky bosses.