Everyone knows that sunburn is bad, but do we really know what sunburn actually is?

We may think of a burn as something that happens when our skin is too hot – that’s not quite the case. Thermal burns are the kind caused by excessive heat. However, they’re not the only kind of burns you can get. Sunburn is a radiation burn, which works very differently to the burns you might get from accidentally touching a very hot stove.

Read on to dispel some common misconceptions about sunburns that could be putting you at a greater risk of skin cancer.

Sunburn is the skin’s reaction to ultraviolet (UV) radiation from the sun. The signs of sunburn can appear with as little as 15 minutes of UV exposure and the affected skin can turn red within 2-6 hours of being burnt. The burn doesn’t only develop during UV exposure – it continues to develop over the next 24-72 hours following initial exposure.

What is UV radiation? 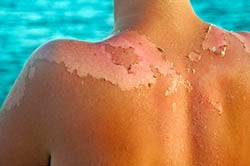 UV radiation is one of the types of radiation produced by the sun and some artificial means, such as tanning beds. It’s a light, just like the light we see, but ultraviolet light is outside of the light spectrum visible to the human eye. UV can’t be seen or felt so there’s no way you can physically tell what your UV exposure risk is. It has no link to temperature or heat – the heat you feel from being in the sun has nothing to do with how much UV radiation your skin is absorbing.

There are three types of UV radiation – UVA, UVB, and UVC. While UVC is the most dangerous of the three, most of it is absorbed by the ozone layer before it reaches the breathable atmosphere. That means it’s really only a concern for astronauts.

The majority of the UV radiation that reaches us is UVA. While UVA isn’t as intense as UVB, we’re exposed to a lot more of it. It penetrates far deeper into the skin, causing the skin to age and wrinkle faster as well as contributing to the formation of skin cancers. UVB does most of the work in creating sunburn, as its damage is more focussed on the outer layers of the skin. It plays a leading role in the development of skin cancer and also contributes to premature aging.

What are the symptoms of sunburn?

The symptoms of sunburn are pretty universally known. The physiological reasons behind these symptoms are important to understand so we can best treat burns.

When UV light hits the skin, it doesn’t do much to the very outermost (and very thin) layer of skin because this is made of dead cells. Unfortunately it penetrates further than that – and when it reaches living skin cells, it rapidly begins to damage and destroy them. Most of the symptoms of sunburn are a result of the immune response to this damage.

The immune system increases blood flow and opens up capillaries in the affected area of skin so that white blood cells can access the damaged cells to remove them. This is why sunburnt skin feels warmer and looks redder – there’s more blood moving through the surface of the skin.

The accumulation of white blood cells in the skin eventually swells to form blisters. It’s important not to pop blisters, as they protect your sensitive damaged skin and are working to heal the area. If a blister does pop, the area should be kept clean and protected to prevent infection.

In the following days or weeks, sunburnt skin may become itchy and start to peel. That’s all of the extra dead skin beginning to detach from the living skin. We’re constantly sloughing off dead skin cells but we don’t really notice this because usually only a very thin layer of our skin is dead – just a couple of cells deep. When more than the usual number of skin cells in an area are dead, it can come off in larger chunks, such as following a sunburn.

What are the long-term effects of sunburn?

The effects of sunburn that are most immediately noticeable are really the least harmful in the grand scheme of things. The biggest harms of sunburn can take years to appear, but can be deadly. UV radiation causes mutations and damage to skin cells which can lead to a number of health and aesthetic harms, primarily:

Once UV radiation damage occurs, it’s impossible to reverse. That’s why it’s so important to prevent sunburn in the first place. No medicine, cream, or treatment can undo the harmful radiation’s effects.

What is a tan? 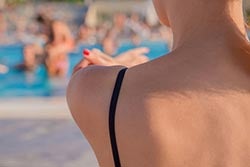 A tan, contrary to popular belief, does not protect your skin from the sun. Some mistakenly believe that getting a tan is a way to immunise yourself against burns. That’s not how UV radiation works. A tan doesn’t protect against any of the harms and risks of UV radiation.

When skin cells experience DNA damage, the cells produce more melanin and trigger other repair mechanisms to try to prevent further damage. However, there has been some research linking this response to the development of melanomas. Even with the minimal protection a tan could over, this is far outweighed by the DNA damage caused by UV radiation and possibly even harms from the tanning reaction itself.

It’s important to note that this relates specifically to melanin in skin as a result of tanning, as opposed to natural skin pigmentation. Natural melanin presence doesn’t come along with the mutation and immune response from tanning, so it offers a level of sun protection without the risk. That definitely doesn’t mean if you have darker skin you don’t need any sun protection – you can definitely still get sunburn and skin cancer.

When am I at risk of sunburn? 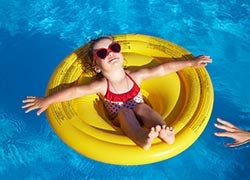 Anytime you’re outside in the daylight presents a risk – even on cold days. UV radiation levels aren’t linked to temperature. You can still get sunburnt during winter! The difference is that we tend to cover up a lot better when it’s cold and incidentally better protecting our skin. Any time you’re going to expose your skin to direct sunlight for more than a couple of minutes, you should apply sunscreen and cover up as much as possible. Even indirect sunlight can be harmful, for example through a window. Windows can block out most of the UVB rays, but UVA can still get through the glass and into your skin.

We are most at risk of sunburn when we’re swimming or hanging out at the pool or at the beach. There are a few reasons for this:

Winter activities (e.g. skiing) present a high risk of sunburn because UV radiation levels are higher in alpine regions due to a thinner atmosphere than at sea level. In addition, snow reflects UV radiation so it can hit you from any angle. While usually skiers and snowboarders are pretty well covered up because of the cold, the face is still very vulnerable.

That ‘windburn’ you get after a day on the slopes – dry skin, goggle tan, chapped lips – is actually sunburn. Wind can’t burn you. Mountain climbers and hikers are also vulnerable to increased UV radiation levels at higher altitudes, even without the reflective snow around. So it’s important to apply sunscreen to your face and any other exposed skin while you’re on an alpine adventure.

The easiest way to know when you’re at risk from UV radiation is to check the day’s UV index for your location on the Bureau of Meteorology website.

How do I prevent sunburn? 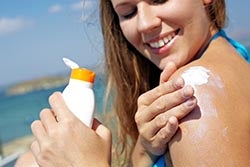 The ‘Slip, Slop, Slap’ earworm has been expanded to include ‘Seek’ and ‘Slide’.

Not all sunscreen products provide adequate protection. Make sure that you use a sunscreen that protects against both UVA and UVB radiation. Such sunscreens are usually called ‘broad spectrum’ but also can be labelled as ‘multi spectrum’ or ‘UVA/UVB protection’. Apply sunscreen at least 20 minutes before sun exposure and reapply every 2 hours.

If you or someone you care for are a baby (aged 12 months or younger), it’s vital to keep that baby skin completely out of the sun. The Cancer Council recommends that babies should not be exposed to the sun during ‘sun protection times’, which is when the UV Index is 3 or above. Babies should be kept in the shade and in full-coverage clothing including a hat. Small amounts of child-friendly sunscreen should be applied to exposed areas such as the face and hands, but as baby skin is very sensitive you should never use sunscreen to protect skin when clothing could do it instead.

How does sunscreen work?

Whether it’s a spray, a lotion, a gel or some other substance, sunscreens are generally made of a mix of ingredients which either deflect or absorb UV radiation to keep it out of your skin.

There are two types of ingredients used in sunscreens. Inorganic chemicals (e.g. zinc oxide, titanium dioxide) are used to physically block and deflect UV rays. These primarily act on UVB. Organic chemicals (e.g. avobenzone, oxybenzone) form a thin protective layer on the skin to absorb UV radiation. Some of these work on UVA rays, some on UVB rays, and some on both. Note that ‘inorganic’ and ‘organic’ are chemical terms which mean different things to the layperson perception of ‘organic’ as opposed to ‘synthetic’.

This is why it’s important to use broad spectrum sunscreen to deflect all UV radiation, rather than just a UVB-screening sunscreen such as a pure zinc oxide product.

How do I help sunburn? 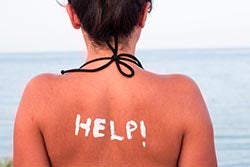 It can take days or even weeks for sunburn to fully heal. Sunburn relief can’t undo the damage nor prevent the further development of the burn, but can help manage the symptoms to reduce discomfort and prevent infection.

Mild sunburn can be treated at home, however, if you have severe burns or are experiencing strong related symptoms, you should consult a medical professional. This includes any blistered sunburn. Sunburnt babies should be taken straight to a doctor.

You can treat sunburn with:

Can I still have fun in the sun?

After reading all of this, you might be justifiably terrified of ever going outside again! Sunburn is no joke and is a total pain to deal with. You can (and should) still enjoy the great outdoors as long as you follow preventative measures and stay vigilant of your sun safety. Keep cool and avoid the burn – just remember to slip, slop, slap, seek, and slide.