When you think of compost, you probably think of a big smelly pile of rotting vegetables. If you’ve got rural property, sure, but composting can be compact, low maintenance, and most importantly, stink-free.

In fact, you can compost even if you don’t have a real backyard or any outdoor area at all, without the fragrance of eau de dump. But why bother? It can seem intuitive that thrown-away food scraps end up decomposing into the earth – but in landfill, it doesn’t happen that way. Your discarded scraps and leftovers don’t get mixed up with dirt, it gets mixed up with other garbage. It rots in an anaerobic (oxygen-free) environment, a process that releases methane gas – a greenhouse gas 21 times more harmful than carbon dioxide.

Composting, on the other hand, turns your rubbish into nourishing food for the earth. It improves soil quality and water retention, and is much gentler on plants than many commercial fertilisers (as long as you do it correctly).

That’s why finding other ways to dispose of your food scraps is one of the easiest things you can do to cut down on your impact on the planet. There are three easier alternatives to traditional compost bins that can work even without any real garden at all – just a little bit of space in your kitchen, laundry, courtyard, or balcony area. 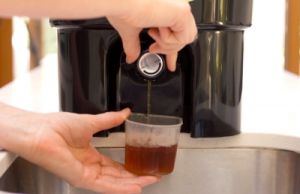 Traditional composting is an aerobic method of breaking down waste, i.e. microbes use oxygen to break down organic matter. Bokashi, however, is an anaerobic method – the microbes involved worst best in conditions with little to no oxygen involved. It’s usually recommended to buy a purpose-made bokashi bucket with a spigot and false bottom to allow the ‘juice’ to separate out and be drained away, however if you don’t mind a little more work you can get things going just using a bucket with an airtight lid. The other key ingredient is the bokashi itself, sold as either a dry ‘grain’ mix or liquid spray.

For each cup of food waste you add to the bucket, sprinkle about a tablespoon of bokashi or spray about 4-5 times over the matter. As you add more layers, press down on the contents (with anything, like a potato masher or your hand in a plastic bag) to push out air and compact everything.

Drain off the accumulated liquid at the bottom every few days, and use it immediately. The bokashi ‘juice’ can be poured down sinks and toilets to help clean things out and eliminate odours, or applied as a liquid fertiliser diluted with water at a ratio of 1-2 teaspoons juice to 2-3 litres of water (more dilute for pot plants, stronger for large trees and shrubs).

Once your bokashi bucket is full, seal it off and leave it for a few weeks to complete the fermentation process. Your fermented bokashi product can then be buried into soil to finish breaking down. Don’t allow the fresh bokashi to come into direct contact with any plant roots, as it can burn them. Instead, dig holes around your existing garden in between plants or mix it into potting mix and leave to rest covered in a plastic bag in a pot for at least two weeks before planting anything. After this time, the acidic component will have broken down.

As you’ll likely continue to generate food and plant scraps while you wait, you can either get a second bokashi bucket to keep going or just save your scraps in the freezer until your one bucket is ready to start again.

It’s important to note that bokashi systems don’t involve rotting the food waste – it ferments it. This essentially prepares it to break down more readily and more quickly when mixed with soil. Bokashi done right should barely smell – if it’s working, it should smell like vinegar, but shouldn’t be pungent. A white film or fungus is also perfectly healthy – although if it’s any other colour, something has gone wrong.

How much space do I need?

Purpose-made bokashi bins come in sizes as small as 6L – perfectly suited to sitting under the kitchen or laundry sink. If you’ve got more space or more scraps to deal with, buckets come in much larger sizes. Handy types can also easily knock one together, as they’re quite simple structures.

You’ll also need somewhere to put the finished fermented product. This could mean a separate compost bin or worm farm, a garden bed or large pot with dirt to dig it into, or a neighbour’s/family member’s/local community garden happy to receive some eco-friendly fertiliser.

Also known as vermicomposting, using worms to break down waste into compost has long been standard practice among earthy gardeners. Worms are incredibly good for your garden, thanks to the way they gobble up dead organic matter and turn it out into rich nutrients for the soil, distributing it evenly throughout the lawn and garden as they wiggle along their way. Some might find them gross, but they’re friendly little factories of goodness for your garden.

Worm farms allow you to feed your kitchen scraps to these little powerhouses without attracting unwelcome scavengers (such as rodents). It’s a nice fair trade – you give the worms a nice safe house and plenty to eat, and they’ll happily pay you back with nutrient-rich fertiliser in the form of their ‘castings’ and ‘worm juice’.

Worm juice, the liquid that drips out into the collecting tray at the bottom of your worm farm (where applicable), can be used as a liquid fertiliser. The castings can be mixed in with more soil to then added to your garden or pot plants for an all-natural, environmentally-friendly feed.

What can I put in it?

Worms are vegans, and fussy ones at that; don’t put any meat, eggs (crushed up eggshells are okay), dairy, or anything oily or fatty. Yep, that means your vegan cheese is no good for their little tummies. Worms can eat up any fruit and vegetable scraps, old lawn clippings, used tea and coffee grounds, and shredded paper and cardboard (non-glossy). In fact, lots of paper and hay is very good to balance out the acidity from the other scraps.

Don’t want to buy or find a place for extra stuff just to recycle your scraps? If you already have a blender, you’ve got all you need to do some cold composting. It’s definitely the quickest way to get scraps into your garden short of burying them directly. No waiting around for things to decompose or ferment before mixing them into your flower bed – as soon as you’ve finished with your food, chuck it into the blender (along with any leftover coffee grounds or old newspaper lying around), cover it with water, and blend it up. Avoid anything too hard or tough for your blender to handle, such as avocado pits. The slurry can then be spread directly into your garden.  This won’t actually compost straight away, of course, but being blended up into tiny bits will mean that it will break down much faster.

You don’t actually need to compost yourself to make sure that your kitchen scraps don’t go to landfill. Many local councils and community groups run composting facilities, often combined with community gardens. All you need to do is collect your scraps and take them to the drop-off facility – you can keep scraps in the freezer in between trips. In return, you can often pick up some fully composted fertiliser to take home for your pot plants or garden, or even trade in for some produce grown at the community garden.

Can you join the compost club?

Home gardening and low-waste living can be quite easy if you start off simple. Composting at home is an easy way to reduce your landfill and turn your rubbish into something good for the earth – and it doesn’t need to be a big messy affair. Even the tiniest apartment dwellers can compost, thanks to some super handy setups you can purchase for a reasonable price.