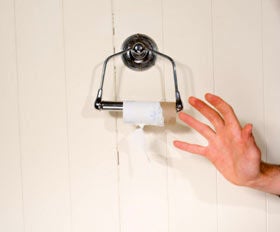 When it comes to annoying bathroom habits, nothing gets our blood boiling more than people urinating on the toilet seat. And our bathroom blunders often lead to arguments.

A new Canstar Blue survey shines a disturbing light on the extent of our bathroom frustrations, with people using up all the toilet paper and hair in plugholes rounding off our top three nightmare scenarios. But urinating on the toilet seat or the floor around it angers most, with 52% of adults declaring it a major bugbear.

There’s nothing worse than finding a toilet seat covered in urine because some inconsiderate so-and-so couldn’t hit the target. And if there’s no toilet paper left to clean up after them, you’ll be close to boiling point.

There’s a good chance it could lead to tension at home, as a quarter of the adults we questioned told us they regularly fight with their partner over the cleanliness of their bathroom.

Although women get more heated about people not cleaning the toilet seat – or the floor around it, because sometimes you can have really bad aim – it annoys a good number of men too. You know the old adage, if you sprinkle when you tinkle, please be sweet and wipe the seat.

People leaving the bathroom floor wet or leaving wet towels lying around is another major annoyance for just over a third of the 2,300 people surveyed, as is toilet paper facing the wrong way (32%) and people leaving the toilet seat up (30%).

Other common pet hates include people leaving the cap off the toothpaste and those who use toothbrushes or razors that don’t belong to them. However, we don’t seem too bothered about running out of handwash (18%) or people simply taking too long in the bathroom (18%).

The survey also found that 60% of women and 51% of men will do anything they can to avoid using a public toilet, while nine out of 10 declared their own bathroom as being generally clean. Despite that, 16% said they argue over who does the cleaning.

We found that women are still doing the majority of bathroom cleaning – and seem fairly happy to do so, according to our results. A whopping 85% of the women we surveyed said they do the bathroom cleaning and more than half of them believe nobody could do a better job of it.

OzKleen – makers of Shower Power – has received Canstar Blue’s Most Satisfied Customers Award for bathroom cleaning products. The brand that boasts cleaning products which “actually work” earned five-star ratings from Australian consumers for effectiveness, ease of use and overall satisfaction, wiping the floor with 17 other well-known brands, including Dettol, Domestos, Jif and Ajax.