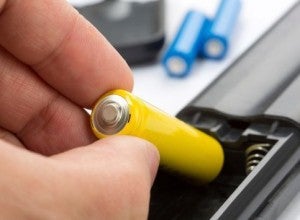 There are countless different types of batteries to power countless electronic items that we use every day, yet we rarely think about what is actually in them.

You can make an electrical current out of anything; zinc, silver, lithium and even potatoes can create an electrical charge to power various items. They work by converting the energy from chemicals into electrical energy that can be used to power an electronic device.

While we could spend a long time explaining what makes up each type of battery, it is much quicker to explain all the basic components required in any battery. And they are:

And there we have it: the three base components of your average battery. To compare brands of batteries, see our customer satisfaction ratings.