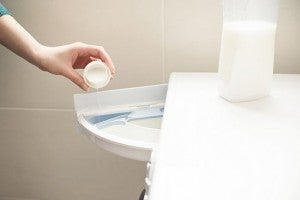 Many of us use fabric softener to make our clothes and fabrics feel soft and comfortable. But have you ever wondered what’s actually in it?

The first fabric softeners were made by the textile industry in the early 1900s. They were made of water, soap and oil, and used to soften fabrics after dyeing, which made them very coarse. Fabric softeners have certainly evolved since then, with scientists creating new softening compounds through the decades.

At first, new softeners couldn’t be put in with the regular wash, because the different chemicals did not mix well. To combat this, dryer sheets were invented. However, they were not as effective as liquid fabric softener and therefore not as popular. Fabric softeners today are made to be included in the regular wash, so we know the formula must have changed in order to mix well. So what are they made of?

How to (properly) clean the toilet

There are three main parts to any fabric softener – a conditioning agent, an emulsifier and colours or fragrances. They interact in the wash to make your clothes soft and sweet-smelling.

On top of softening clothes, a conditioning agent can also reduce static cling because the molecules are positively charged to counteract the negatively charged fibers of fabric.

These molecules are also various kinds of fatty or lubricating materials, just like the oil in the first fabric softeners. A lubricating compound is what makes the clothes feel soft because it provides slipperiness.

The long scientific name for the typical conditioning agent used is polydimethylsiloxane; it is silicon based, which makes for easy ironing and improved softening without reducing quality.

Quats, the class of materials in the quaternary ammonium family, are another type of conditioning agent used in fabric softeners. More specifically, the common ingredient is dehydrogenated tallow dimethyl ammonium chloride, or DHTDMAC for short. Both have the same function: to create a thin layer of their oily residue to make clothes feel soft, reduce static cling, and make ironing easier.

Why you should regularly clean your microwave

Whether it is a fatty compound or silicon compound, the conditioning agent in a fabric softener is rendered useless without something to mix it into the wash. As we know, oil and water don’t mix, so it isn’t going to dissolve into the water and soften fabric without a little chemical help.

Three types of emulsifiers are common in a fabric softener: macro-emulsions, micro-emulsions and emulsion polymers; each treats the conditioning agent differently, while still serving the same ultimate purpose.

The simplest to explain is a micro-emulsifier, as it does exactly what it says on the tin. It makes the molecules of the conditioning agent so small that they get into the fabric. Because these particles are broken up to be so small, light will pass around them, and the liquid will be see-through.

Macro-emulsifiers are similar in composition, but not in the way they work. These emulsifiers surround the oil/silicon molecules so they can be dispersed into the water and soften clothes. If the conditioners weren’t surrounded by this emulsifier, then they would simply separate from the water and float on the surface.

Fabric softeners with a macro-emulsifier are milky in colour, similar to a shampoo or conditioner. The most complex of emulsifiers is an emulsion polymer, as it does not truly combine the oily or silicon molecules with the water. Instead, it creates a net of particles which is caught by the clothes in the washing machine. The ‘net’ coats the fabric, rather than penetrating a fabric like micro-emulsifiers do.

Obviously, you buy fabric softener to make your clothes smell nice, which is why fragrances are incorporated. They are made from a huge range of different chemicals, and often they are not specifically listed, as fragrance formulas are considered trade secrets in industries such as cleaning products, personal care, and cosmetics.

Like almost any other product out there, fabric softeners contain preservatives to make them last longer, as well as emulsion stabilisers. Stabilisers are included to ensure product quality, as well as assist in the preservation of the product.

While there is a lot more complicated science involved, this has been a basic run down of fabric softener ingredients. They have certainly come a long way since the early 1900s.