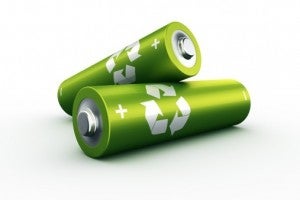 Because they can’t just be thrown into your normal recycling bin, there need to be special provisions when it comes to recycling the component parts of household batteries.

There are many services out there for recycling batteries – it can be as simple as taking them to the right shop and putting them in a battery recycling box. So, why should you recycle batteries?

For starters, it’s a better option than sending them to landfill. If they aren’t recycled, they can leak lots of harmful chemicals into the ground and water, where they can cause a lot of damage to the environment.

Chemicals from batteries that aren’t supposed to be in the environment not only pose a danger to plants and animals, but to human health too. Each year, more than 300 million household batteries are thrown out with ordinary waste and a staggering 8,000 tons of batteries end up in landfill sites, according to Planet Ark.

Specialised battery recycling not only keeps dead batteries out of landfill, but it can also allow for the still-usable components of the battery (lead, cadmium, mercury, lithium, manganese, nickel and zinc) to be re-used to make another product – perhaps even another battery.

As well as national retailers such as ALDI and Battery World, there are special battery-recycling programs in a few capital cities.

In Perth, battery recycling bins are all over the city for residents to dispose of regular household batteries, and in a similar fashion Sydney City Council offer locations for the recycling of batteries and other household items such as lightbulbs and phones. And in Melbourne, a collection program is now up and running.

Further details about all battery recycling can be found at the Australian Battery Recycling Initiative’s website. And to see how consumers rate battery brands, click here.