Bosch Back Over Avoidance System 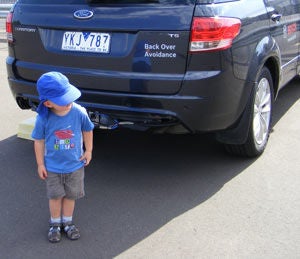 Safety is a paramount theme in modern car design. One of the most prominent systems being put in place in new vehicles is radar detection that can sense obstacles and traffic invisible to the driver. Enter: new technology from Bosch, dubbed ‘Back-Over Avoidance’ – a system which aims to drastically reduce accidents caused by driver blindness.

Bosch’s Back Over Avoidance system is an obstacle detection system that utilises radar and ultrasonic sensors in the rear of a vehicle to detect small objects behind the vehicle that the driver cannot see when reversing, such as young children and animals.

If the driver doesn’t stop the car, then the system applies the brakes automatically to prevent a collision. The system was developed in Melbourne by Bosch Australia and will hopefully be rolled out by 2016.

According to Bosch, in Australia there are an average of seven children under the age of 15 who are killed every year by a moving vehicle at home, and sixty who are seriously injured. Bosch’s development of a robust rear object detection system for everyday cars will help reduce these avoidable accidents, and the ability of Bosch to mass-produce such a technology and distribute it to manufacturers around the world will only increase its usefulness.

Any product that makes efforts to save even a single life deserves attention, but a product that endevours to save many lives – especially the lives of children – is worth admiration.