This electric innovator needs no introduction. The Tesla Model S doesn’t make sacrifices because it isn’t powered by petrol, but rather leaps forward because of the sum of its parts. 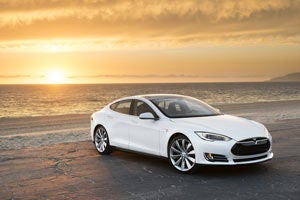 Tesla’s Model S introduced a raft of technological innovations when it first went on sale a few years ago overseas. As the world’s first fully electric sedan car, it promised emissions-free motoring for larger numbers of people than ever before, but it also included a number of additional innovations.

The interior functions, including HVAC, navigation, phone calls, radio and music, are all controlled from a central 17” touchscreen which can be split in two to show different windows.

The Tesla Model S has two independently controlled motors: one above the front wheels, and one above the rear. That means this All Wheel Drive vehicle has a very sophisticated system in which the tyres grip the road, meaning you’ll experience great traction when driving. Two motors means a lot more grunt too, with this vehicle able to accelerate from zero to 100 km per hour in 3.4 seconds.

In addition to its unique electric powertrain, the Model S’s most innovative feature is its inbuilt Autopilot function which allows the car to almost drive itself when in dense traffic and on the open road.

The system combines a front-facing camera with 360-degree sonar sensors to determine the position of other cars on the road, allowing the Model S to accelerate and decelerate along with the car in front, as well as detect potential hazards such as pedestrians and reckless driving, for which it can brake automatically if the need arises.

You can see how these systems work in this video:

The car also parks itself with no steering input from the driver. Best of all, the car’s functions are constantly being updated with wireless software updates which are downloaded via the inbuilt internet connection.

How much is it?